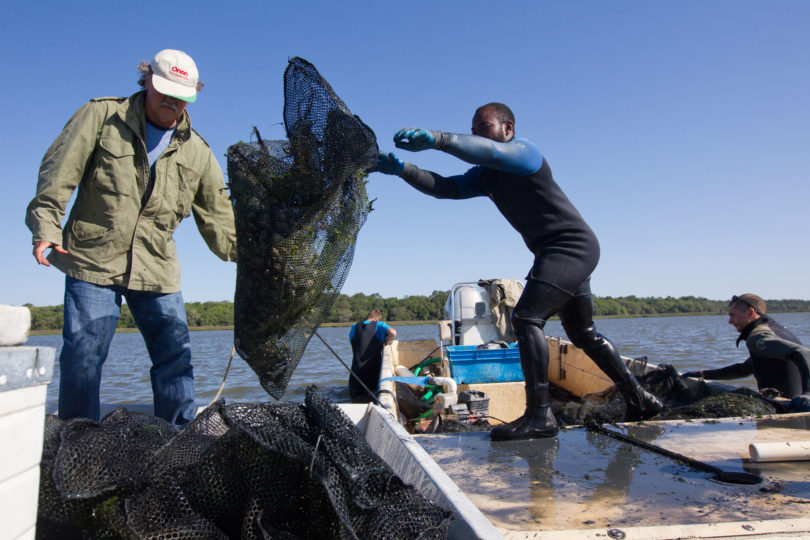 It’s a Friday afternoon on Charlie Phillips’ dock and bags of 200-count clams are packed and tagged for delivery to New York and Canada as well as to local destinations. In one week, he ships 7,000 to 8,000 pounds from his small business, Sapelo Sea Farms in Townsend. Soon, he hopes to process twice that many.

“The clams are keeping me in business,” said Phillips, a commercial fisherman for nearly four decades. “I would have almost nobody working if it wasn’t for this.”

The future of commercial fishing looked grim in the late 1970s, when overfishing and strict government regulation caused a decline in the pounds of shrimp the commercial trawlers were bringing in. Many went out of business.

Phillips, with help from the UGA Marine Extension Service, survived by diversifying his operation to include clam and oyster farming. His once seasonal business now runs year round generating nearly $500,000 annually.

“There’s no way, shape or form I’d be doing clams right now without UGA,” Phillips said. “I might be digging a few, but I wouldn’t be doing aquaculture.”

Perhaps more important, however, have been efforts to clean up the coastline, rivers, creeks and estuaries, which provide protection for much of the marine life.

In the late 1980s, concerned fishermen and environmentalists called UGA to complain about the water quality near Brunswick. MAREX worked with local officials along the coast to identify sources of the water pollution and to educate them about the problems new development can cause the fragile ecosystems.

“Water quality is the biggest issue on the coast,” Walker said.

Few know that as well as Jeb Byers, an associate professor in UGA’s Odum School of Ecology, who spends much of his time on the coast monitoring the mollusk population.

On a late afternoon in June, Byers and his staff, based on Skidaway Island near Savannah, take their boat out to check on the oyster reefs they are attempting to develop in a controlled environment.

Working with researchers from Florida and North Carolina, Byers will study the effects the predators have on the oysters as the reefs develop. The findings could provide critical insight into how the ecosystem functions. Oyster reefs provide fish habitats, erosion control and water filtration.

Byers is one of many UGA researchers who use the MAREX resources available on the coast. Walker says he’ll also call in researchers from UGA when someone from the marine industry comes to him with a problem.

“Working with scientists is very important to us,” he said. “We do a lot. We help the state in a lot of ways.”

But that’s not what’s important to the 7- and 8-year-olds combing the salt marsh along the Skidaway River on a warm summer morning. They are looking for fiddler crabs and coffee bean snails, “no bigger than the tip of your finger,” marine educator Anne Lindsay said.

The marsh proves to be a boundless source of excitement. As the campers hunt for the snails and chase mud crabs, a Wood Stork soars overhead. The black and white birds, which can stand 40 inches tall with a five-foot wingspan, are an endangered species. In the river, a dolphin rolls by.

This is the 20th year of the summer camps, which are part of the larger, year-round education component of marine extension.

Claire Oldfield, 8, is part of the summer camp group that goes crabbing off the pier behind the aquarium. She waits as counselor Mary Sweeney-Reeves ties a piece of raw chicken into the bottom of a basket attached to a long rope. When the bait is secure, Claire drops it in the water, waits a few minutes and pulls it back up.

Sweeney-Reeves gingerly pries one of the crabs from the chicken and measures the distance between the points on its shell—four-and-a-half inches. Too small. She tosses it back into the water.

Over the next half hour, Oldfield will pull up a half dozen crabs, one of them almost seven inches across and big enough to keep.

“You,” said one of her fellow campers, “are the crab queen.”