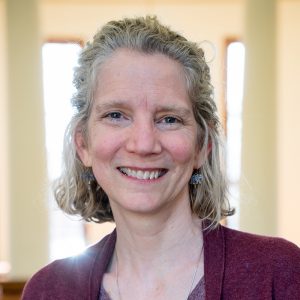 Katie Darby Hein, a clinical assistant professor in the University of Georgia College of Public Health, is the recipient of the 2021 Lee Anne Seawell Faculty Recognition Award from the UGA Career Center. The award recognizes Hein for her positive influence on student career development.

Hein received the award based on feedback from UGA’s Career Outcomes Survey. Class of 2020 graduates identified faculty members who positively influenced their career development in their survey responses.

“The sheer number of students recognizing Katie for her career support demonstrates her exceptional mentorship,” said Scott Williams, executive director of the UGA Career Center. “She is truly a student career advocate who recognizes the value of both career networks and career support for her students.”

After earning three degrees from UGA, Hein now considers teaching UGA undergraduate students the part of her work she loves most.

Students begin the Bachelor of Science in health promotion curriculum by taking Hein’s foundations class. From the start of the program, Hein wants her students to think about career decisions and seek relevant experience while still in school. Hein talks with students about careers within public health, from clinical settings to public policy, and assigns them a service-learning project during the foundations course.

“If what I want them to see is community need, sending them out to work in the community is how I try to do that,” Hein said of the service-learning project.

After their introductory course, students take a second major course with Hein. This allows her to get to know the students and them to know her. Many students then feel comfortable seeking career guidance from Hein, who began serving as internship coordinator in spring of 2020.

“It’s really a professional development major,” Hein said of the health promotion and behavior program. “The whole time, we help them think about what they might want to do next.”

Hein helps students in their professional journey by spending one-on-one time with them. By being available to listen, she prompts them to ask more questions and explore opportunities they may not have previously considered.

“I talk them through how they would look for a job they love,” Hein said. “As long as you’re heading in the right direction, you’re doing the right thing.”

A year of virtual and hybrid learning has made connecting with students more difficult for Hein, but she has continued to make herself available through email, Zoom and the occasional outdoor walk with students.

“I try to practice empathy, and I try to let the students see that I am doing that,” said Hein, who also reaches out to students who seem to be struggling or disengaged. “This has been hard; I try to think of ways to get the students what they need.”

The late Lee Anne Seawell endowed the award, which has been given annually since 2017. After joining UGA in 1947 as one of the university’s first female administrators, Seawell worked in career services and student financial aid until her retirement in 1987.

Regardless of the career path students choose, Hein hopes to help them become critical thinkers and good listeners.

“We teach students not to just go in to solve a health problem the way they think it should be solved but to work with groups of people to help them solve their own problems,” Hein said.