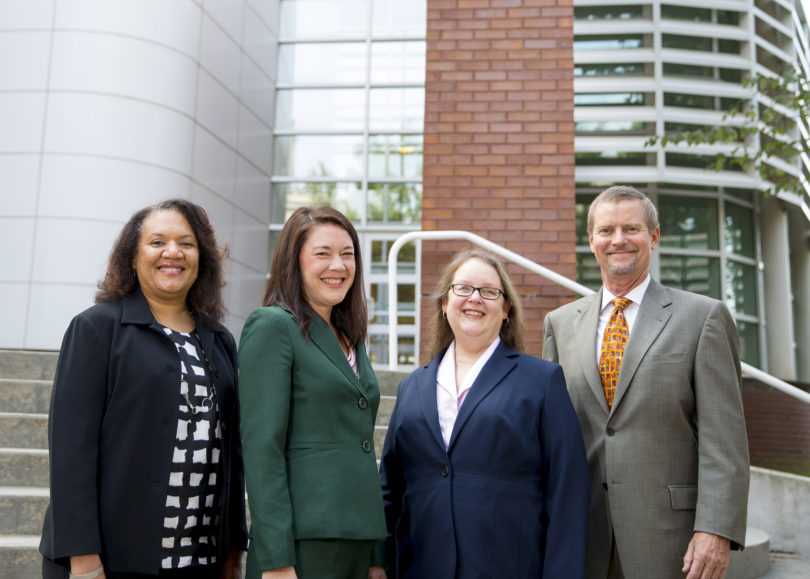 Created by the Southeastern Conference in 2008, the fellowship program seeks to identify, prepare and advance academic leaders for roles within SEC institutions and beyond.

The participants will work with senior administrators at UGA based on their areas of interest and attend two SEC-wide workshops that include lectures, panel discussions and opportunities to interact with their counterparts from other SEC institutions. The fall workshop will be held Oct. 5-7 at the University of Arkansas, and the spring workshop will be held Feb. 24-26 at the University of Mississippi.

“The program gives faculty a focused, thoughtful look at leadership opportunities in higher education,” said Meg Amstutz, associate provost for academic programs and UGA’s SEC ALDP liaison. “In addition to networking with other leaders from SEC campuses in the fall and spring, they have the opportunity to sit down with UGA and University System administrators during the course of the year.”

Hashimoto, the associate dean for clinical programs and experiential learning and the Allen Post Professor of Law at the School of Law, has received numerous teaching honors, including being named a Josiah Meigs Distinguished Teaching Professor. She created the law school’s Appellate Litigation Clinic, through which she supervises students who brief and argue cases on behalf of indigent clients. Her scholarship focuses on criminal defendants’ right to the assistance of counsel and the availability of remedies for constitutional deprivations in criminal cases, and her work was cited by the U.S. Supreme Court in its decision upholding the constitutional right of self-representation. In addition, Hashimoto recently testified before the U.S. Senate Judiciary Committee.

Kissinger is the director of the Institute of Bioinformatics and a professor of genetics in the Franklin College of Arts and Sciences. She directs an international bioinformatics training program and two large multi-institutional research contracts. She has served on numerous committees at different administrative levels at UGA as well as on several National Institutes of Health scientific working groups for national and international research and external advisory board membership for an NIH IDeA Biomedical Research Network program. She received a Creative Research Medal from UGA in 2009 and the Faculty Excellence in Diversity Leadership Award in 2013. Kissinger’s research focuses on data mining, data integration and systems biology approaches to the study of infectious parasitic diseases.

Thomas is a professor of industrial/organizational psychology and the founding director of the Center for Research and Engagement in Diversity. She serves as associate dean for faculty leadership development and diversity in the Franklin College. She is also a graduate of the HERS Management Institute at Wellesley College. Thomas is an elected Fellow of both the Society for Industrial and Organizational Psychology and the American Psychological Association, and a recipient of the Janet Chusmir Award for Distinguished Service from the Gender and Diversity in Organizations division of the Academy of Management. As an expert in the psychology of workplace diversity, Thomas focuses her scholarship and institutional engagements on the issues of strategic diversity recruitment, supporting diversity in STEM workplaces and understanding the career experiences of high-potential women of color.

Wilson is associate dean for academic affairs and UGA Foundation Professor in Public Health in the College of Public Health. He co-founded and directs the Workplace Health Group, an interdisciplinary research group that focuses on organizational health issues. He has served in a variety of administrative capacities, including graduate coordinator and department head before becoming associate dean, as well as on numerous committees at all levels of the university. He was instrumental in transitioning public health from a department to a college and attaining accreditation. He also has served on advisory boards and scientific working groups for the Centers for Disease Control and Prevention and NIH and in leadership roles for the American Public Health Association and Association for Schools and Programs of Public Health.

Since its inception, SEC ALDP has graduated more than 275 faculty and academic administrators. The SEC Academic Leadership Development Program is part of SECU, the academic initiative of the SEC. SECU serves as the primary mechanism through which the collaborative academic endeavors and achievements of SEC universities are promoted and advanced