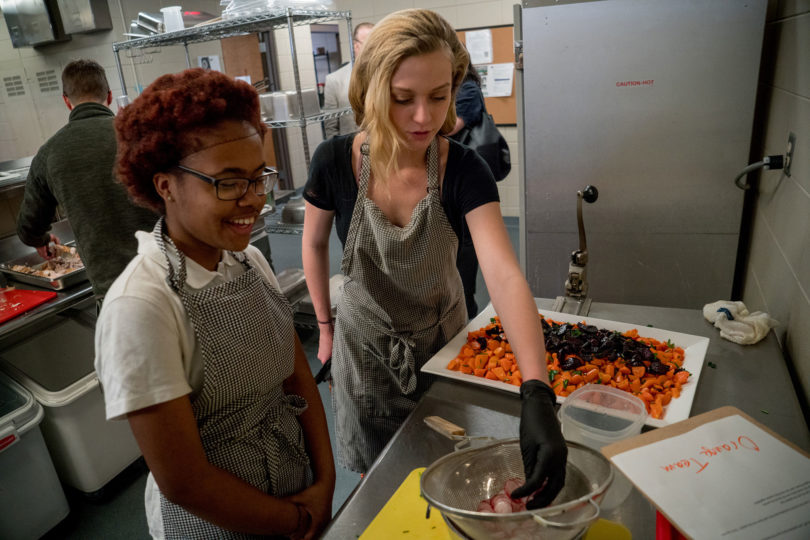 Reading and mathematics are important parts of education, but for chef Hugh Acheson, so are culinary arts, applied design, economics and other areas of family and consumer sciences.

“It’s about empowering kids with common sense and good skills. What they learn is the idea of how to live simply, smartly, economically and how to make good choices,” he said. “Life is really changed when you know things like how to cook an egg. It made me a better human in a lot of ways.”

In 2015, Acheson worked with Athens-Clarke County school officials and others to start Seed Life Skills, a nonprofit organization that helps develop curricula around family and consumer sciences that teachers can integrate into their classrooms. The goal is to increase access to family and consumer sciences education, which helps enrich communities, according to director Almeta Tulloss.

Seed Life Skills worked with UGA’s College of Family and Consumer Sciences on that curriculum, the College of Environment and Design helped Skills Life Skills host a charette in March 2016, and the Willson Center for Humanities and Arts helped organize and sponsored the Seed Life Skills Symposium on Feb. 22 that included a cooking competition, panel discussion and fundraising dinner that raised $6,500 before expenses.

The group took questions from the audience and discussed a variety of topics, including whether or not food is political and what the government’s role in it should be, issues around food in schools and how to intertwine the various threads of people interested in improving the food industry to create change.

Panelists also shared advice they would give to families fighting food insecurity. Nuri and Nischan suggested families grow as much of their own food as possible. Tulloss agreed, adding that it helps to can, freeze or preserve that food.

Colicchio’s advice was to seek out existing programs and organizations.

“Whether it’s a federal program or a local program, there are resources out there,” he said.

Food and nutrition is just one of the areas on which the Seed Life Skills curriculum focuses, along with sustainable design and conservation and economics.

Still in a pilot phase, the program is being taught by four teachers, one at each of Clarke County School District’s four middle schools. They integrate lessons from Seed Life Skills into their own curriculum. Students can earn up to 20 badges for learning those skills.

“When there is proper family and consumer sciences education in the classroom, you have students whose passions get a chance to grow and be nourished,” Tulloss said. “You know that feeling when you make something or you do something? They’re proud of themselves in a way you don’t necessarily feel when you take a quiz or test. When you make something from scratch, it is truly empowering.”

That impact lasts into adulthood by encouraging them to make better choices later on, according to Acheson. Tulloss agreed, saying they aim to help students become resourceful and resilient problem-solvers.

“I hope students take away from it that they are powerful,” she said. “They have the power to change the world and to change themselves.”

That’s already the case for one student Tulloss mentioned. Alana, a sixth-grade student at Burney-Harris-Lyons Middle School, became so inspired by what she learned in the pilot program that she started her own business, Alana’s Blessed Creations, and now sells her handmade wreaths and decorative home goods at the West Broad
Farmers Market.