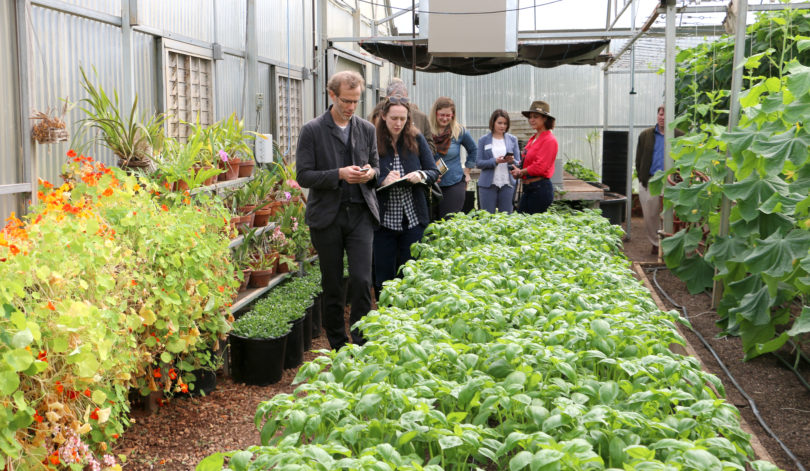 Chef Dan Barber and Charlotte Douglas tour the greenhouses at Whippoorwill Farms in Winterville. Barber was in Athens to speak at the University of Georgia.

Farm-to-table advocate reaches out to land grant institutions to help.

In just under two decades, the local food movement has changed the way many people think about their food. Now it’s time for the next step: a local seed system.

The wall between heirloom seed varieties and mass-produced modern varieties needs to be dismantled, Barber told more than 300 people gathered at the University of Georgia Special Collections Library Tuesday. Plant breeders, like those at the UGA College of Agricultural and Environmental Sciences, need to work more closely with farmers and chefs to produce varieties that provide natural disease and pest resistance as well as phenomenal flavor.

“You can take advantage of the past with respect and modernity and turn it into something very exciting for the future,” he said during his talk, “What Kind of Menu will Meet the Challenges of the Future? Exploring a New Recipe for Good Food from the Ground Up.”

Barber pioneered the farm-to-table movement in fine dining in New York City and in upstate New York. He has received multiple James Beard Foundation awards and built a reputation as a chef and farmer. He is also the author of “The Third Plate: Field Notes on the Future of Food” and has been featured in the documentaries “Chef’s Table” and “Wasted! The Story of Food Waste.” 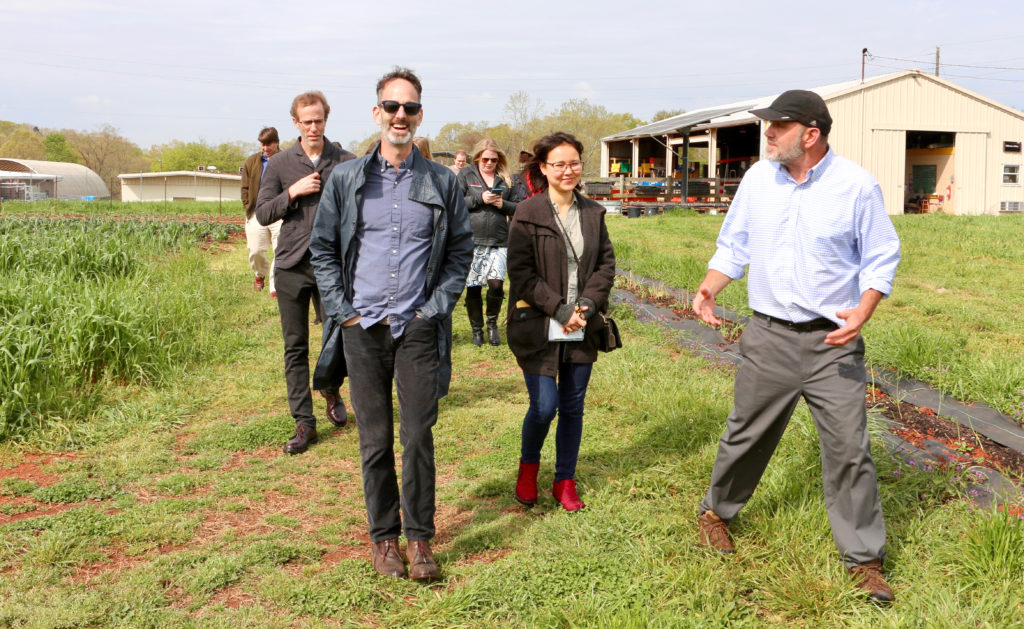 To blend the flavor of heirlooms and the hardiness of modern varieties, local chefs and farmers will have to work with plant breeders to develop vegetables and fruits adapted to each region. Scientists at land grant universities are uniquely positioned to help make this happen.

Earlier this year, inspired by his search for new flavors and more hardy heirloom vegetable varieties, his team launched Row 7 Seed Company—a company working with chefs and plant breeders to provide vegetable varieties that focus on flavor while retaining some natural disease and pest resistance.

Currently, plant varieties and seeds are developed to thrive in the most widespread environment possible, often to the detriment of flavor or hardiness. That makes sense because seed companies need to sell their seeds in as many towns and states as possible to maximize profit.

“This company wants to do the exact opposite,” Barber told the crowd. “The idea is to look at the development of a seed and flavor from a microscopic level. What is this particular region—the ecological conditions, the cultural conditions — dictating for a seed?”

Farmers and plant breeders have traditionally worked hand in hand to develop varieties that will thrive in local conditions through the land grant system, but Barber advocates getting chefs involved in the process as well. He has helped develop more than a half-dozen wheat and grain varieties based on the flavor profiles he wants to work with in the kitchen.

“Why shouldn’t a chef be at the table with the initial construction of a seed,” he said. “That comes with a little bit of hubris but I’ve found that’s its actually possible.”

Barber was at UGA to speak to students and the public about his vision for the modern food and farm systems, but he also wanted to visit with plant breeders at UGA CAES. He met with breeders and toured UGA’s student-run farm UGArden and local organic farm Woodland Gardens in Winterville.

He hopes to work with breeders here to develop new varieties that provide trademark flavors for Southeastern farmers and chefs.

“We’re going to start the breeding projects moving forward on this very local, very micro level,” he said. “I’ve been more emboldened in this idea while I’ve been here in Georgia, just in the last few hours, seeing the interest, enthusiasm and passion for a new food culture and by the youth and how they’re dialed into good food, good flavor, fresh ingredients and exploring and celebrating this very diverse environment and history that y’all have here.”

Information about ways in which UGA CAES supports local food systems in Georgia is online. A video of Barber’s lecture will be posted soon for those who were not able to attend.