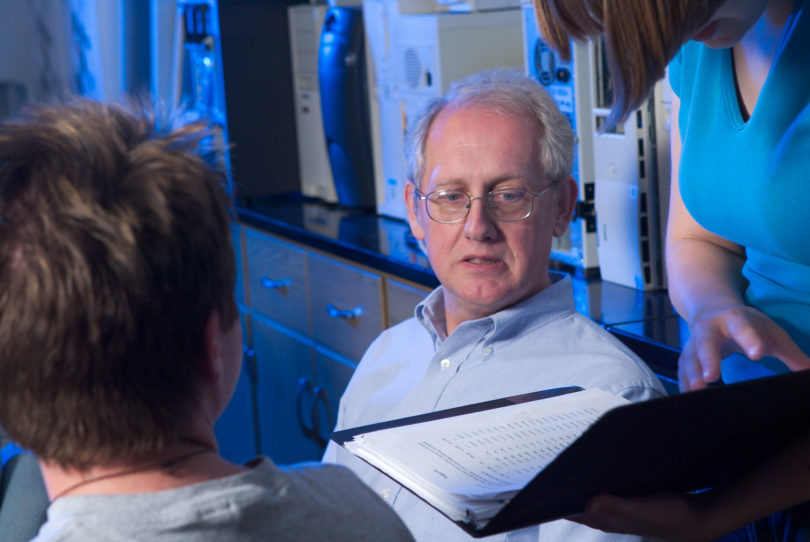 The words “popular” and “telescope” usually don’t fit in the same sentence. Even scattered among book chapters is unlikely. But they’re the first words astronomer Scott Shaw says about the monthly public viewing sessions at the UGA observatory.

“It’s like Disney World on an off day,” Shaw said of the line for the viewings, which can bring half-hour waits on busy days.

“We get all sorts of people. Retired folks, kids-everybody wants to look through a telescope. It’s just a popular thing to do,” he said.

The biggest draw is a telescope with a 24-inch mirror anchored in the observatory. Installed about 1949, it’s medium-sized by today’s standards, but still larger than what the backyard astronomer can afford.

Despite mirror size, the action stays the same. It’s funneled through a one-inch eyehole, just big enough to force squinting.

The wait Sept. 14 ran about eight minutes for a peek through the 24-incher, but when events like eclipses occur, the lines swell with anticipation. Many hit the big scope twice as Shaw usually turns the observatory’s motorized roof and shifts the scope toward a new spacescape.

“Most people say ‘Wow.’ Or ‘I never thought it would look like that or something, but we do get the rare comment like, ‘It looks better in pictures’,” Shaw said. “Still, I think most people like it. It’s different to see a planet through a telescope than in your textbook or on TV.”

For Samuel Warren, an English major and first-time visitor on Sept. 14, part of the fascination was getting a fresh perspective.

“You don’t think outside your own self very often, but this makes you think outside the planet,” Warren said as he peered at a deep space star cluster.

“It’s hard to realize how many stars are out there until you see it like this. It’s better than the (text) books.”

If it rains or clouds over, someone from the department delivers a brief talk on astronomy for the public. The next potential lecture is titled, “The Coolest Stars.”

“People still come when we have talks. Not as many, but we have a few hard-core people who stick around,” said Loris

Magnani, an astronomy professor. “Some folks really like that sort of thing.”

But without the telescope, the popularity dips. Maybe the words are more related than they seem.