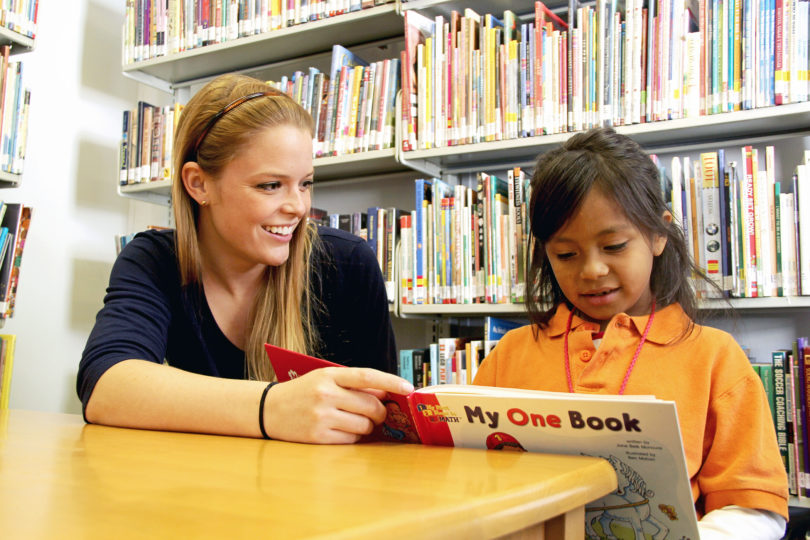 “Entiende? Do you understand?” Jake Rooney asked that a lot when he was teaching long division in Spanish.

Rooney, who graduated May  9 from UGA, volunteered at the Athens Latino Center for Education and Services as part of his spring semester Spanish service-learning class. He served as a front desk assistant and math tutor for local Latinos studying for the GED.

Rooney was just one of 75 UGA students in the Spanish 4090 service-learning practicum who volunteered across Athens.

Students volunteered as interpreters at Mercy Health Clinic and tutors in the Clarke County School District, where they also assisted Spanish teachers and the Spanish Club. They helped with computer classes and English classes at Casa de Amistad. They helped out with tutoring and homework for elementary school students in after-school programs at the Pinewoods Library and Oasis in the Pinewoods mobile home park.

The students had a chance to practice their Spanish with native speakers, learned about Latino culture and earned academic credit, and in turn the community got around 3,000 service hours every semester from students in the class.

“It’s language immersion. Unlike the classroom, you can’t revert to English,” Rooney said. “You have to speak Spanish. There’s no way around it. You learn it better. It’s the best thing to do short of going abroad.”

And it’s good for the UGA Spanish students to have that contact with other language learners.

“When the UGA Spanish students are talking to Spanish speakers learning English, it makes both speakers less self conscious about their learning process, less worried about making mistakes,” said instructor Kerry Steinberg.

There’s also a Spanish adult literacy project where UGA students helped Spanish-speaking adults read and write in their native Spanish. Established by Betina Kaplan, an associate professor in Romance languages who received a Service-Learning Teaching Excellence Award earlier this year, the project helps adults who have had little or no schooling in their home country.

Spanish 4090, which was comprised mostly of students majoring or minoring in Spanish, met weekly to discuss issues relevant to the Latino community: immigration, immigration law, bilingual education. There were guest speakers and panel discussions. And all the classes were conducted entirely in Spanish.

During the class, students kept a diary-en español-about their volunteer work and reflected on the time spent. And this semester they wrote a research paper about a topic of their choosing on issues surrounding the local Latino population.

The Spanish 4090 service-learning practicum has been offered since 2002. It’s grown from 25 students and one credit hour to 75 students and one, two or three credit hours. Study abroad versions of the course are offered in Argentina, Costa Rica, Peru and soon in Spain.

The goal of the class is to help students become global citizens, to increase their language fluency while engaging in respectful ways with the Spanish-speaking community. They do this while addressing a need in the Hispanic community-for tutors, translators and access to university resources.

Hannah Adair, who graduated May  9 from UGA, took the service-learning class because she wanted more than what is offered in a typical Spanish class-she wanted a chance to make a difference.

“My Spanish has improved a lot,” she said. “I went from an experienced Spanish speaker, to an effective communicator. I learned a lot of new phrases when I completed the parent-teacher conferences.”

Adair volunteered 42 hours this semester-most of which was at Oasis Católico Santa Rafaela in the Pinewoods neighborhood. There she read, practiced addition and subtraction and played math bingo with early elementary school-aged children in a mostly Hispanic community.

She picked Oasis because she enjoys working with children.

“I loved being able to form a relationship and a friendship with the kids,” Adair said. “The highlight of my week was seeing their smiling faces running from the bus into Oasis and giving me the most genuine loving hug imaginable. At Oasis, the love from the kids had such an impact on my heart.”

And the feeling is mutual, according to Aida I. Quiñones, a branch manager at the Pinewoods Library and Learning Center, in the Pinewoods mobile home park.

“The UGA service-learning students make a big difference in the lives of the after-school program students in Pinewoods,” she said. “Just the fact that the UGA volunteers come from different backgrounds and life experiences will have a positive impact in the lives of the children they are tutoring. They serve as mentors, friends, and many times give support with everything from homework to dealing with personal issues.”