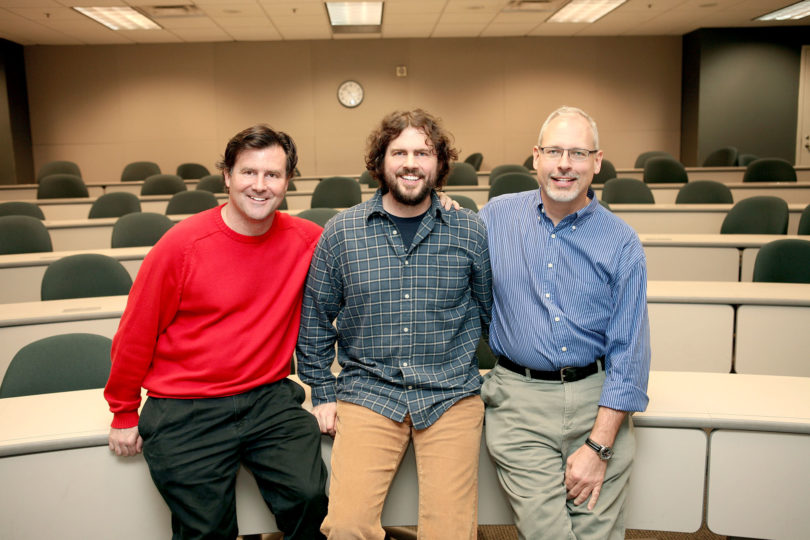 Patterson Hood, songwriter and frontman for Southern rock band Drive-By Truckers, looked a little nervous standing in front of a group of college students without a guitar or microphone between him and his audience.

Brought in as the first guest lecturer for the university’s new music business certificate program, Hood began by quickly and concisely summing up both the reason he’s a musician and the reason for the program.

“There’s no reason to do this for a living except it being the only thing you can do,” Hood says. “Then you gotta figure out a way to make it a viable thing.”

Giving students the tools to make a career in the music business “a viable thing” is exactly what UGA’s Terry College of Business and Hugh Hodgson School of Music had in mind in cooperatively launching the new certificate program.

Co-directors Bruce Burch and Steve Dancz were on hand earlier this month for Hood’s visit, which was on the first day of class for the new program.

Burch graduated from UGA with a business education degree in 1975, but knew nothing about the music business before moving to Nashville in the 1970s to become a songwriter.

He eventually became a successful songwriter, writing number one hits for country star Reba McEntire, but not before running afoul of many of the hazards he hopes now to warn his students about.

“We want to arm you with knowledge and try to save you from the heartache,” Burch says.

Dancz first started thinking about a music business course back in the early 1990s, after returning to Athens to teach at UGA following working as a composer and musician on the West Coast scoring movies and TV shows.

Also playing an integral role in getting the music business program off the ground was Terry College alumnus George Fontaine Sr., a partner at independent record  label New West Records. Fontaine, who booked bands for the Georgia Theatre in 1977, made a private gift to support the certificate program in its start-up.

New West Records released the Drive-By Truckers’s sixth album, “The Dirty South,” and will issue its newest album, “A Blessing And A Curse,” in April. New West also re-released two of the band’s older albums, “Gangstabilly” and “Pizza Deliverance.”

Hood says he encourages musicians themselves to do as much as possible to advance their careers, however, rather than relying on record labels. With the help of the Internet and home recording software like ProTools, musicians no longer have to rely on others to promote and distribute their music.

“The more you can do yourselves, the better,” he says.

Hood disabused students of the notion that making records  leads to musicians making major money. He said he’s never made a significant amount of money from any of his records. Most of the money the band makes comes from selling merchandise like T-shirts.

“The records get the music out so people will come to your shows and buy T-shirts. So once you come to terms with being in the T-shirt business.  . . . ”says Hood, smiling and shrugging his shoulders.

Hood says he would have liked the opportunity to enroll in a music business program like UGA’s rather than learning how to be successful through trial and error. A native of Florence, Ala., Hood says he tried to get into the commercial music program at the University of North Alabama.

“They wouldn’t let me in it,” he says, still visibly chastened by the memory.

Hood is the first of a series of guest lecturers Burch and Dancz have lined up to speak to their students. Other scheduled speakers include Bertis Downs, general counsel for Athens band R.E.M. and adjunct professor at UGA’s School of Law; Buck Williams, co-manager and agent for Athens band Widespread Panic; and Velena Vego, booking agent for Athens music venue The 40 Watt Club and general manager of Pitch-A-Tent Records.