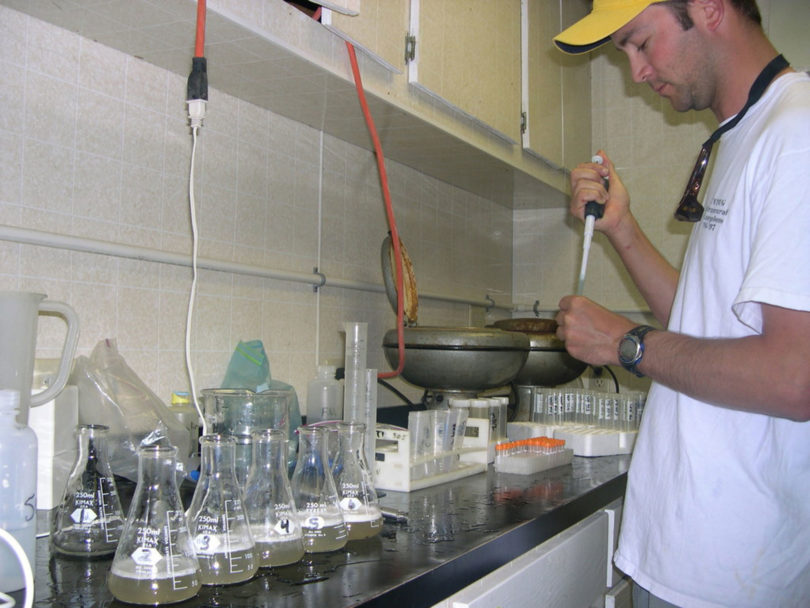 Kemp and his colleagues tested the responses of corals to various temperatures in the lab.

Athens, Ga. – Increased seawater temperatures are known to be a leading cause of the decline of coral reefs all over the world. Now, researchers at the University of Georgia have found that extreme low temperatures affect certain corals in much the same way that high temperatures do, with potentially catastrophic consequences for coral ecosystems. Their findings appear in the early online edition of the journal Global Change Biology.

Lead author Dustin Kemp, a postdoctoral associate in the UGA Odum School of Ecology, said the study was prompted by an abnormal episode of extended cold weather in January and February 2010. Temperatures on inshore reefs in the upper Florida Keys dropped below 12 C (54 F), and remained below 18 C (64 F) for two weeks. Kemp and his colleagues had planned to sample corals at Admiral Reef, an inshore reef off Key Largo, just three weeks after the cold snap. When they arrived, they discovered that the reef, once abundant in hard and soft corals, was essentially dead. “It was the saddest thing I’ve ever seen,” Kemp said. “The large, reef-building corals were gone. Some were estimated to be 200 to 300 years old and had survived other catastrophic events, such as the 1998 El Niño bleaching event. The severe cold water appeared to kill the corals quite rapidly.”

Odum School Professor William Fitt, Kemp’s doctoral advisor and one of the paper’s co-authors, realized that the team had a unique opportunity. “Nearly 100 years ago, Alfred Mayer described the temperature tolerance of different corals in the Dry Tortugas and found very similar results,” Kemp said. “We decided to take the next step and learn how and why the cold temperatures caused the corals to die.”

The researchers took samples of Siderastrea siderea-one of the few reef-building corals to survive-from Admiral Reef. They also took samples of three common Florida Keys corals, Montastraea faveolata, Siderastrea siderea and Porites astreoides from Little Grecian Reef, a nearby offshore reef that had not experienced the temperature anomaly to the extent of Admiral Reef. Kemp explained that Little Grecian Reef is far enough offshore that the cold-water temperatures were likely buffered by the warm waters of the Gulf Stream, which resulted in offshore coral reefs being less severely affected by the cold air mass that was pushed by an unusual weather pattern over much of the U.S. during that two-week period.

Back in the lab, they simulated the temperatures that had been recorded at Admiral Reef during the cold weather event, testing the different corals’ physiological responses at 12 C and 16 C (61 F), and then, after the corals’ exposure to the cold, returned the temperature to 20 C (68 F). They found that although responses varied depending on the coral species, in general the stress of extended cold temperatures had an effect similar to that of high temperatures.

Kemp explained that corals depend on Symbiodinium, a type of symbiotic algae that lives inside them, for nutrition. Through photosynthesis, the algae produce sugars, which are passed on to the corals. “The cold temperatures inhibited photosynthesis in the algae, leading to a potential net loss of carbon transferred from the algae to the coral,” said Kemp. He said that each coral species had its own unique type of Symbiodinium, some of which were better able to tolerate and recover from cold temperatures than others.

“Corals and their symbiotic algae have a range of stress tolerance,” said Kemp. “Some can handle moderate stress, some are highly sensitive, and some are in between. But extreme cold is just one stressor among many.” Other threats to coral health include increased seawater temperatures, diseases, ocean acidification, and pollution. “Adding stress from wintertime cold episodes could not only quickly kill corals but also may have long-term effects,” he said. “For corals found in the Florida Keys, winter is typically a ‘non-stressful’ time and corals bulk up on tissue reserves that are important for surviving potentially ‘stressful’ summertime conditions (i.e. coral bleaching).”

Kemp said that researchers at NOAA attribute the record-breaking cold anomaly to a negative trend in the North Atlantic oscillation, an atmospheric pressure pattern that influences the weather in the northern hemisphere. “They speculate that if the trend continues, these kinds of extreme cold events may become more frequent,” he said.

Kemp stressed that the study’s findings should not be interpreted to downplay the major role of higher temperatures on corals’ decline. “The study shows that warming may not be the only climate-related problem for coral reefs in the future,” he said.

Kemp also pointed out that it was not only the corals that were devastated by the cold snap. “The corals provide the framework for the entire reef ecosystem,” he said. “The lobster, shrimp, clams, fish-all the creatures that depend on the reef-were affected too. The potential consequences for coral ecosystems are extremely alarming.”

Besides Kemp and Fitt, the paper’s coauthors were Clinton Oakley and Gregory Schmidt of the UGA Department of Plant Biology, Daniel Thornhill of the nonprofit Defenders of Wildlife and Bowdoin College, and Laura Newcomb of Bowdoin College. The research was supported by the National Science Foundation and Bowdoin College.