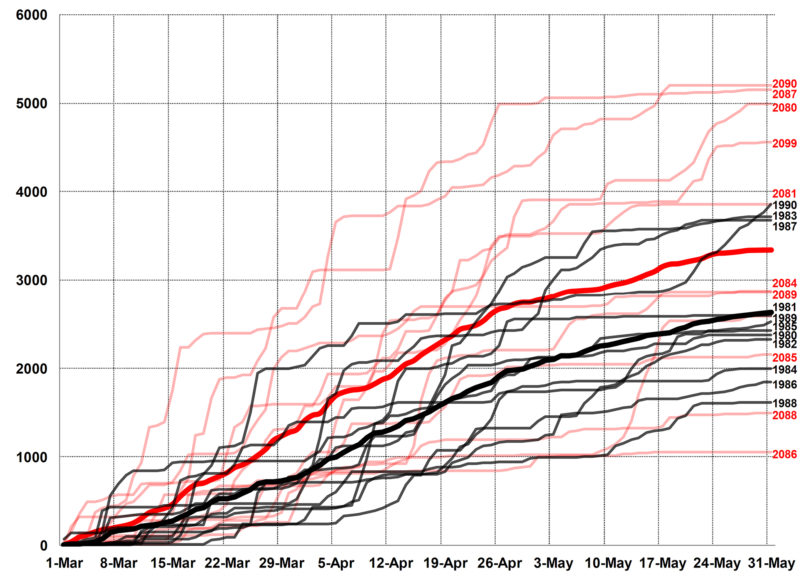 Athens, Ga. – More tornadoes will be commonplace by the year 2080 as a result of a changing climate, according to a new study from University of Georgia geography researchers.

They used climate models to examine severe weather patterns in the past-tornadoes, large hail and damaging wind-and how these patterns might change in the coming years.

Researchers found that if humans continue to emit carbon into the atmosphere, more severe weather can be expected, specifically by the end of the 21st century. Severe weather seasons are likely to be more variable, according to the study published in the journal Climatic Change.

Victor Gensini, who was a UGA doctoral student at the time of the study, worked with Thomas Mote, head of the UGA department of geography, to look at weather patterns more closely using a technique called downscaling.

This technique produces very high-resolution model data regarding tornado events from large-scale climate model data. Researchers compared tornado activity from 1980-1990 to project tornado activity for 2080-2090. These models give researchers more detail about the occurrence of particular weather event patterns like the rates of tornadoes.

“This is the first study of its kind, but several other studies using other methodologies have come to similar conclusions,” said Vittorio, who is now an assistant professor in the College of DuPage’s meteorology department. “This particular study is unique because it gives us the first idea of how severe weather might change on the local storm scale.

“Most of the research surrounding severe weather and climate change cannot directly examine what will happen at the tornado scale because the grid spacing inside of climate models is too coarse to resolve such features. From these downscaling simulations, we were able to find that severe weather is likely to happen more often in the next 60 years.”

The findings suggest severe weather season also is likely to be more variable, leading to years with large tornado counts and some years with very few tornadoes. The season is expected to peak earlier, in March instead of May.

“Previous work by other researchers has focused on future storm environments while this work was able to resolve individual events, in a synthetic fashion, and give us a better sense of the likelihood of severe weather in a changing climate,” said Mote, who is also a professor in the UGA Climatology Research Lab.

For more information on the University of Georgia geography department, see www.geography.uga.edu.