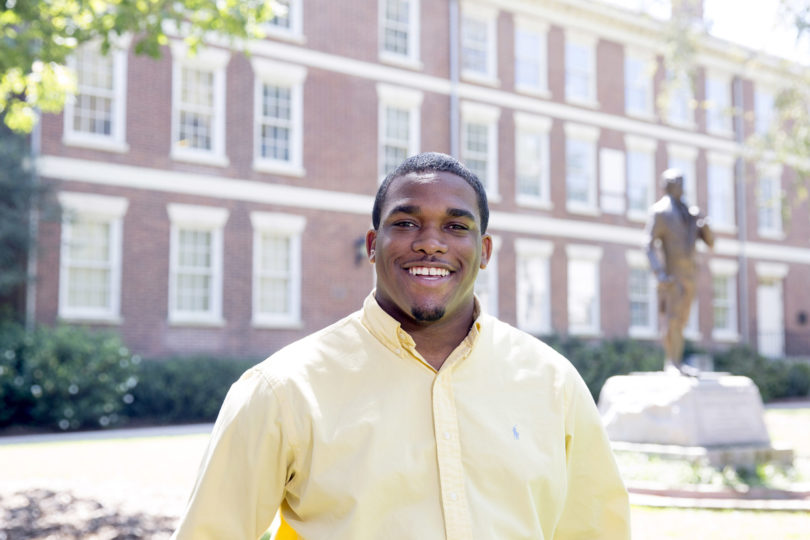 When Johnelle Simpson strolls on North Campus between classes, it’s easy to see what made him a good candidate to become the 2015-2016 Student Government Association president and the 2015 Homecoming King at UGA.

The affable Simpson seems to be waving or nodding at someone he knows every five or 10 steps.

He credits his tendency for getting to know lots of people with growing up in the small, southwestern Georgia town of Donalsonville. He describes it as a place where everybody knows everyone else.

“I carry that with me,” Simpson said. “I feel like I should know all the people I’m walking next to on campus.”

As SGA president, Simpson has been working to make his charm and his leadership pay off for his classmates and for future UGA students.

Simpson first came to UGA in high school through the Terry College of Business’ weeklong summer program, Terry Academy. The program introduces high school students to business concepts and gives them a chance to explore campus.

Simpson liked UGA so much that it was the only institution he applied to.

“I put all my eggs in one basket,” Simpson said. “It’s funny. Now one of my majors is risk management and insurance, which teaches the opposite.”

Simpson’s second major is political science through the School of Public and International Affairs. That interest in politics also grew out of his upbringing in Donalsonville, where his mother was a city councilwoman and twice ran for mayor.

Simpson plans to go to law school after he graduates.

With an appreciation for student governance, Simpson has been a man of action since he came to campus. In his first year, he applied for a position in student government. He didn’t get in, so he ran for president of his freshman dorm, Creswell Hall, under the campaign slogan “Johnelle for Creswell.” That same year, Simpson received the Student of the Year Award from UGA’s Residence Hall Association and National Residence Hall Honorary.

He continued to play a role in student governance throughout his UGA career and ran unopposed in the SGA presidential race last spring. Simpson’s administration, which includes Vice President Houston Gaines, a junior political science and economics major from Athens, and Treasurer Darby Miller, a junior marketing major from Rogers, Arkansas, has built a platform on improving student services—particularly in regard to student safety—strengthening SGA’s relationship with local and state governments, helping promote inclusive postsecondary education and connecting students to existing resources.

One major achievement the administration already has realized is bringing a free, after-hours car service to the Athens campus this fall. To improve security for students, SGA partnered with GOTCHA Ride to provide students with a free and sustainable mode of on-campus transportation during evening hours. The service, which employs student drivers, now picks up and drops riders off at designated spots throughout campus and provides service from 7 p.m. until 2 a.m. Riders are able to request a ride by using the GOTCHA Ride app available in the Apple and Android app stores.

Simpson also plans to continue to foster partnerships between student leaders and faculty and staff.

“They (faculty and staff) play a key role in student success,” he said. “It’s more than academics that create a finished product. No matter how much we do at SGA, we always benefit from faculty and staff assistance.”