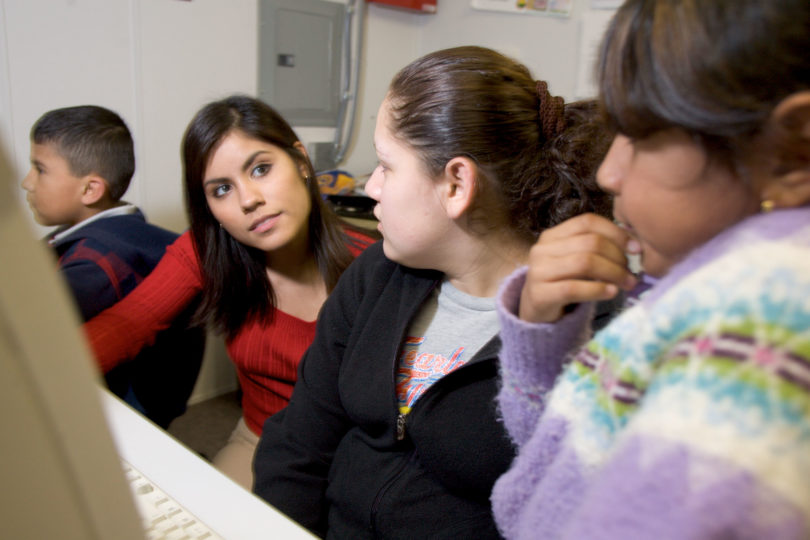 There, Duarte works as a library assistant, offers computer training and coordinates a UGA-sponsored tutoring program for the sons and daughters of the families in the community.

An international affairs major who has received both Goizueta Foundation and Gates Foundation scholarships, Duarte represents the kind of model student that UGA is currently recruiting as part of a Latino Initiative that has been in place for the past five years.

“I want to work with Latinos, to promote education,” says Duarte. “Whether you’re teaching them about better health care or computers so they can get a good job, it’s the only way to have a better life.”

Set in motion by Art Dunning, vice president for public service and outreach, with help from Coca-Cola executive and UGA alumnus Frank Ros and program director Maritza Soto Keen, the Latino Initiative has progressed with such swiftness and success that UGA recently received a $1.8 million grant to collaborate with the University of Texas at Austin. Funded by the Lilly Endowment as part of a $12.3 million Hispanic Scholarship Fund grant, the UGA/UT-A grant will create a pilot program aimed at recruiting, retaining, and graduating Latino students from colleges and universities across the U.S. No other schools in the nation have undertaken or been offered such a collaboration.

When the 2000 census revealed that Georgia’s Latino population had grown 300 percent since 1990, the University System of Georgia commissioned a study to determine the economic and social impact that the burgeoning Latino population was having on K-12 and higher education.

Dunning, then senior vice chancellor for human and external resources for the USG, was an integral leader on the committee, along with two prominent members of the Atlanta Latino community: Ros, whom many alumni remember as captain of UGA’s 1980 championship football team, and Keen, leader of the Latin American Association.

When Dunning assumed his position at UGA, he made certain that one issue of utmost importance from the regents’ study was at the forefront: economic impact of a large Latino population on the state of Georgia. The study revealed that because of cultural or language barriers, Latinos have difficulty understanding the health care and education systems. Rather than finishing high school, they often choose to take low-paying jobs to support their families and thus lack the skills required for higher-paying jobs.

“As a land-grant institution, we have a responsibility-an obligation-to examine the economic impact on health care, transportation, and education,” says Dunning. “We have to educate people to participate in our society. Education provides you options as you develop skills.”

UGA first addressed the needs of the Latino community at the 2001 “Power of Latinos for a Stronger Georgia” conference held on campus; in 2003, the Latino advisory board formed, consisting of representatives from nine departments.
According to Sara Martinez Tucker, president and CEO of the HSF, UGA was chosen based on the commitment and interest for addressing Latino issues.

“From the very beginning,” she says, “the level of commitment from [President] Adams and [Provost] Arnett Mace, as well as Art Dunning, has been extraordinary.”

Once the staff is in place for the collaboration, including a coordinator for each location (UGA, UT-A and HSF headquarters in San Francisco), an analysis will be conducted. A portion-$750,000-of the grant has been earmarked for scholarship support, and the rest of the money will be invested in programs as needs are identified.

“This is a great opportunity for UGA to step to the forefront of being progressive. We need to try to make an impact,” says Ros. “We should all give back more than what we take. At the end of the day, whether our reasons are altruistic or economic, what we give is good for the state.”

And thanks to students like Duarte-who plan to “pay it forward” using skills learned at UGA-the future looks much brighter for Georgia’s Latino citizens.