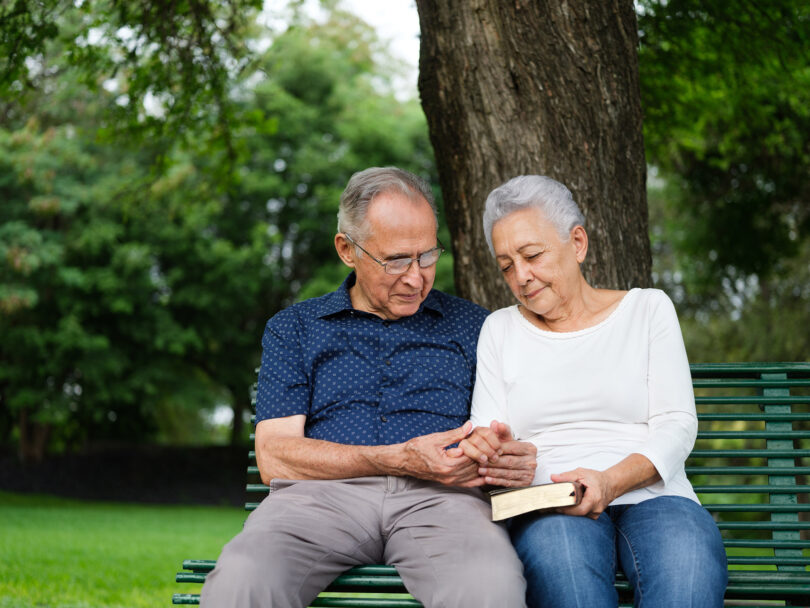 Shared religious experiences are one way couples can strengthen their marriages as they age. (Getty Images)

Couples that pray together stay together. It’s a common religious saying, but a new study from the University of Georgia is giving the proverb some scientific credence.

Churches, mosques and synagogues provide a kind of built-in social life for their members, with religious services, classes and various other gatherings. Going to those types of events with your partner can help strengthen your marriage, especially as you and your partner age, according to the study published by the American Psychological Association’s Journal of Psychology of Religion and Spirituality. The researchers also found that partners who didn’t originally identify as very religious but frequently engaged in common hobbies or activities together saw their participation in religion grow as a couple over the duration of the study.

“I see this with many retirees—they’re sitting in retirement and sometimes it seems as though they get stuck in a rut. At times it can seem like they don’t know what to do with all this time they have now.  This can be damaging not only to their own well-being, but it can take a toll on their relationship with their spouse,” said lead author Victoria King, a postdoctoral researcher at UGA’s Center for Family Research.

“Engaging in joint hobbies and finding things that they can do together is important and can help strengthen their relationship. Perhaps that hobby might be getting more involved in church. I know that my grandparents look forward to their church related activities that they do together.”

The researchers followed 371 couples, most of whom had been married for about 30 years. The study measured partners’ levels of religiosity by gauging how important religion is to them and how often they attended religious services.

They also examined how often couples participated in joint activities, such as going on walks or bike rides, taking weekend trips without their children and spending time on hobbies together, among other things. Additionally, study participants were asked how happy they were with their marital relationship and their overall satisfaction with the state of their marriage.

It is important to find those little times where families or couples can engage in some sort of joint activity together that they can enjoy.” — Victoria King, UGA Center for Family Research

Previous research has shown that as individuals age, the importance of religion in their lives often increases. Because most religions emphasize the sanctity of marriage and the family unit, it makes sense that religious involvement would encourage couples to place an added value on doing things together and keeping their families strong, King said.

“Families and couples now are always pulled in so many different directions, with jam-packed schedules, and family time is often pushed aside,” King said. “It is important to find those little times where families or couples can engage in some sort of joint activity together that they can enjoy.”

The findings also showed that the driving factor appeared to be the wives. They were the ones who reported being more religious or spending more time with their husbands, meaning that women may spend more time engaging in relationship maintenance than their spouses. Because of that, they may have been more likely to suggest doing things as a couple or becoming more involved in church.

The study was co-authored by Kandauda K.A.S. Wickrama, professor of human development and family science in UGA’s College of Family and Consumer Sciences, and Steven Beach, Distinguished Research Professor in UGA’s Department of Psychology in the Franklin College of Arts and Sciences and co-director of the Center for Family Research.