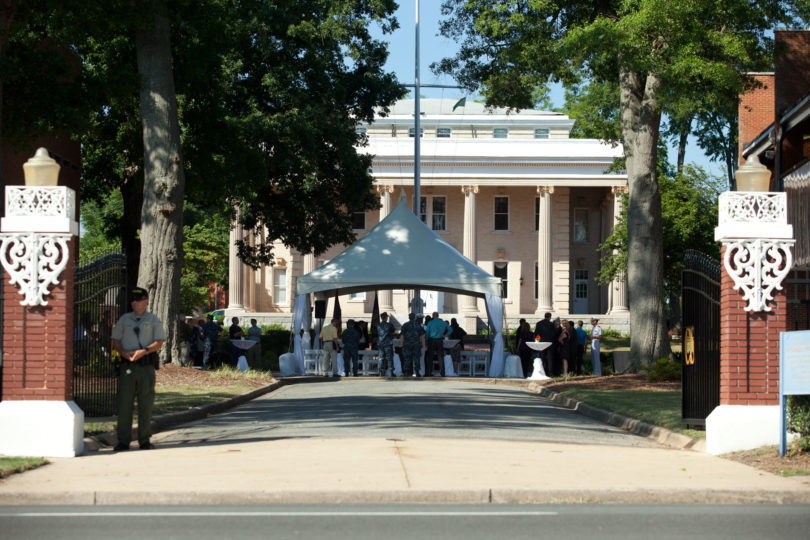 After 57 years, Athens and UGA will bid farewell to a community institution, but local leaders announced July 28 that they would not let the U.S. Navy Supply Corps School leave without a 57-day salute.

The base is closing under the federal Base Realignment and Closure process, and the property is returning to UGA to become the UGA Health Sciences Campus.

“Before the Navy ships out, it is important to recognize its legacy here in Athens,” Adams said. “We’ll have much more to discuss about the opening of the Health Sciences Campus over the coming year.”

The Navy Supply Corps School is being consolidated in Newport, R.I. Formal handover of the campus will take place in spring 2011, but UGA, the Navy and community representatives decided to host commemorative events this fall in advance of the final graduation ceremony for Supply Corps School trainees.

“For every ‘Suppo’ (supply corps officer) out in the fleet, Athens will always hold a special place in our memories,” said Hayes, himself an alumnus of the Supply Corps School and the outgoing commanding officer. “A move like this, although part of what we signed up for by joining the armed forces, is always bittersweet.”

Specific recognition efforts are designed to reach many different parts of the community. They include:

• Week of Aug. 29: In partnership with Georgia Power, the city will hang commemorative banners along key roads in the city recognizing the Navy School. Sponsorship of these banners is available through the Athens Area Chamber of Commerce.

• Beginning Sept. 3, the Athens Banner-Herald will publish an interesting fact about the Navy School campus for 57 days in its print edition.

• Sept. 4: The Navy Supply Corps School will be recognized at UGA’s home football opener with a jet flyover, and a Navy Color Guard will likely present the colors for the national anthem.

• Sept. 17: The Navy Supply Corps School campus will be open to the public for a picnic at 5 p.m. and for a community celebration and free concert headlined by Sister Hazel at 9 p.m.
Organizers are currently seeking local bands to serve as the opening acts.

• Week of Oct. 24: The Navy School will host a variety of events to celebrate the final week. Events will include a 5k road race and barbecue dinner on the base; a public golf outing; the Navy Ball at Pound Hall on the Navy School campus (open to the public for the first time); and final commencement exercises for the Navy Supply Corps School (closed to the public).