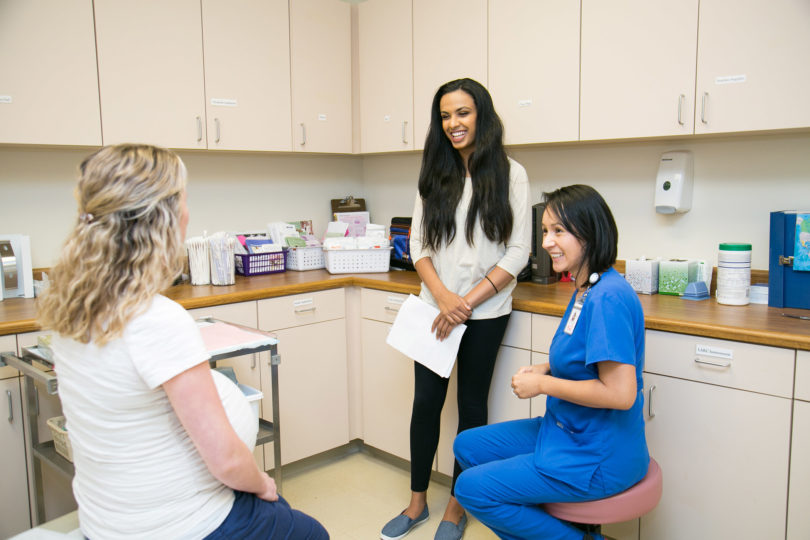 Shivani Rangaswamy researched public health needs in Archway communities and found that many suffered from babies born at a low birthweight.

University of Georgia undergraduate Shivani Rangaswamy is getting a head start on a career in medicine by helping pregnant women in rural Georgia understand how to lower their risk of having low birth weight babies.

Through an internship with UGA’s Archway Partnership, Rangaswamy created a resource guide to educate women about behaviors, such as smoking, stress and poor nutrition, that could result in babies weighing less than 5.1 pounds at birth. The guide, for pregnant women and health care workers, offers local resources ranging from Medicaid to local health departments and pregnancy centers. The guide includes phone numbers so readers don’t need internet access to use it.

Babies born at a low birth rate are more likely to have health problems later in life including diabetes, heart disease, high blood pressure, metabolic syndrome and obesity. That not only reduces quality of life but puts a strain on already stressed rural health care systems.

There is a dramatic divide between the number of low birth weight babies born in rural Georgia and those born in urban areas of the state, in part because resources to help pregnant women are not as accessible in many rural communities.

“I knew that birth weight gaps would exist,” Rangaswamy said. “I was surprised [the incidence of low birth weight] was 17 percent higher (in some rural areas), comparable to what you see in developing countries.”

“Georgia has some big counties,” Sikes said. “In Twiggs County, you may be in Dry Branch and the health department is 50 miles away in Jeffersonville. You might not know about these resources or how to navigate them.”

I love working in science labs, but it’s hard to see the end goal. The end goal here is changing someone’s life. There’s a tangible end goal as opposed to a published paper. — Shivani Rangaswamy

During the summer, Rangaswamy traveled to current and alumni Archway Partnership communities-Grady, Spalding, Colquitt and Clayton counties, as well as Houston County-where low birth weight babies had been identified as an issue during the local hospitals Community Health Need Assessments, a federally mandated program. In each community, she met with doctors and nurses and learned what resources for patients were available in the area.

She found that both health care providers and patients were unfamiliar with some of the resources she had discovered. The printed guide will help doctors and nurses in those counties point their patients directly toward targeted support services, many of them free, that otherwise may be hard to find or even unknown to patient and provider alike.

“Not only did she share her expertise, but she had an opportunity to see innovative work going on in that area in diverse communities across the state,” Elliott said. “I think she has a greater understanding of the challenge in rural communities now and how innovative they’ve been in adapting programs to needs in their communities.”

For Rangaswamy, the project was a way to make a difference right now instead of waiting until she’s a doctor.

“I love working in science labs, but it’s hard to see the end goal,” she said. “The end goal here is changing someone’s life. There’s a tangible end goal as opposed to a published paper.”

Rangaswamy became involved with the Archway Partnership as a 2016-17 Public Service and Outreach Student Scholar. During the fall semester she and the other student scholars learned about the eight PSO units’ outreach in general at UGA. During the spring, each was assigned to one of the eight units to do a 150-hour internship.

The Archway Partnership, established in 2005, is a program that connects Georgia communities to the vast resources of the university to address critical challenges as identified by that community.