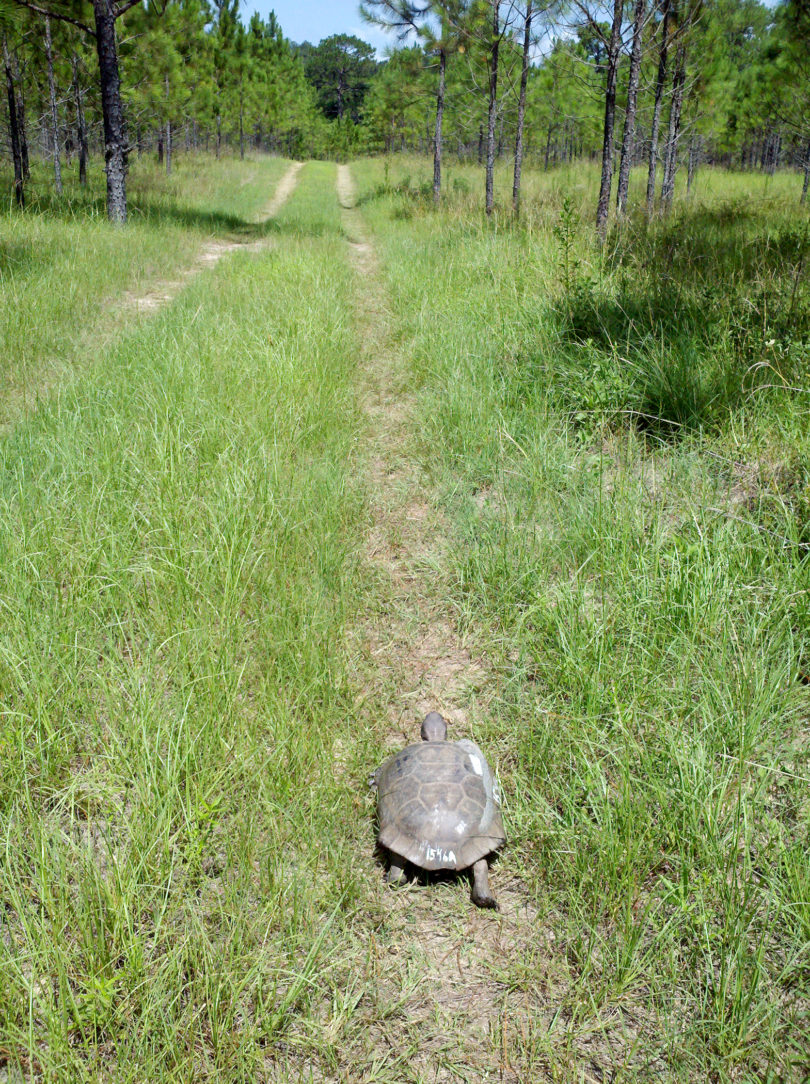 Athens, Ga. – Assumptions about how much and how far chronically ill gopher tortoises move around could be wrong, a new University of Georgia study has found. Following the movements of tortoises sick with upper respiratory tract diseases showed that the ailing reptiles migrate farther and could be spreading diseases more than originally thought.

Gopher tortoises are native to the southeastern U.S., and they are considered a keystone species because the burrows they make provide refuge for hundreds of other species, including frogs and snakes. Not only have tortoise populations been reduced by extensive habitat loss, but infections from these respiratory diseases may be contributing to population declines.

“Some of these tortoises are so sick one wouldn’t think that they would be able to move around much, but they can,” said Jessica McGuire, who led the study while earning her doctorate at the UGA Warnell School of Forestry and Natural Resources. “We didn’t know much about their behavior when they were symptomatic, prior to this study. The movement we documented could put adjacent populations at risk.”

McGuire, now with the Georgia Department of Natural Resources, and other researchers recently published two articles in the Journal of Wildlife Diseases on the prevalence of upper respiratory tract diseases in gopher tortoises and how these illnesses affect their movements.

Upper respiratory tract diseases are highly contagious and are typically caused by bacteria like Mycoplasma agassizii and Mycoplasma testudineum, as well as viruses. Sick gopher tortoises can suffer from discharge from their nasal cavities and eyes, conjunctivitis, lethargy, emaciation and even swelling of their eyelids and ocular glands. Because tortoises are very social and often touch noses, either while breeding or fighting, these respiratory diseases are easily spread among individuals.

Researchers had hypothesized that chronically ill tortoises would not move around as much as their healthy brethren, but McGuire used radio tracking to monitor 40 adult tortoises from a long-term study site at the Jones Ecological Research Center at Ichauway in southwest Georgia to find out how much and how far they really move.

Advisers on the project were Lora L. Smith from the Jones Ecological Research Center, Craig Guyer of Auburn University and Michael Yabsley, who has a joint appointment with the Warnell School and the Southeastern Cooperative Wildlife Disease Study in the UGA College of Veterinary Medicine.

The Jones Ecological Research Center has the state’s largest gopher tortoise population and has been the site of several previous studies, according to Smith, and the property is managed with frequent prescribed fire to maintain high-quality habitat for tortoises and other wildlife.

Yabsley said this was an excellent population to study because of the previous data on disease prevalence and tortoise behavior, as well as the high-quality habitat.

“If we are seeing disease in the Jones Center population, then there is potential for this disease to really have an impact on other populations that are more stressed,” McGuire said. “We hope this study sheds some light on the potential impact of this illness.”

Of the tortoises being tracked, 30 adults tested positive for disease but were either asymptomatic or had mild symptoms, while 10 showed severe signs of the illness.

“We were surprised to see some of the severely symptomatic tortoises moving so far,” McGuire said. “Out of the 10 severe tortoises tracked, six moved great distances. For example, one of these tortoises traveled more than a mile in a day. We are not really sure why a sick animal would make these kinds of movements. One idea is that they lose their sense of smell due to severe swelling of the nasal passages, which may impair their ability to navigate.”

McGuire said it’s unusual for tortoises to move around that much regardless of sickness, but these results should be considered when making wildlife management decisions.

“Tortoises generally do not move far from their burrows,” she said. “The recapture data for healthy tortoises in our study confirmed this. Some of the tortoises were using the same burrows that they used in the 1990s.”

However, gopher tortoises are frequently moved when their habitat is being developed.

“These results suggest caution when relocating tortoises and that health assessments—including blood collection and testing—should be required prior to moving tortoises between populations,” Yabsley said, adding that finding sites with tortoises that test negative for Mycoplasma agassizii should be a factor in choosing where tortoises are relocated.

“We want to keep the negative sites negative,” he said.

Yabsley said researchers need to study the long-term impacts of upper respiratory disease on tortoise populations, particularly as the clinical signs of the illness can come and go over a number of years. This could contribute to decreased fitness, life expectancy and reproduction.

This issue will be discussed at the upcoming Gopher Tortoise Council annual meeting Oct. 16-18 in Albany, McGuire said.

“It is important that land managers and people working with tortoises pay attention to clinical signs and report their observations,” she said. “We suspect that this disease has had some devastating impacts in some populations.”