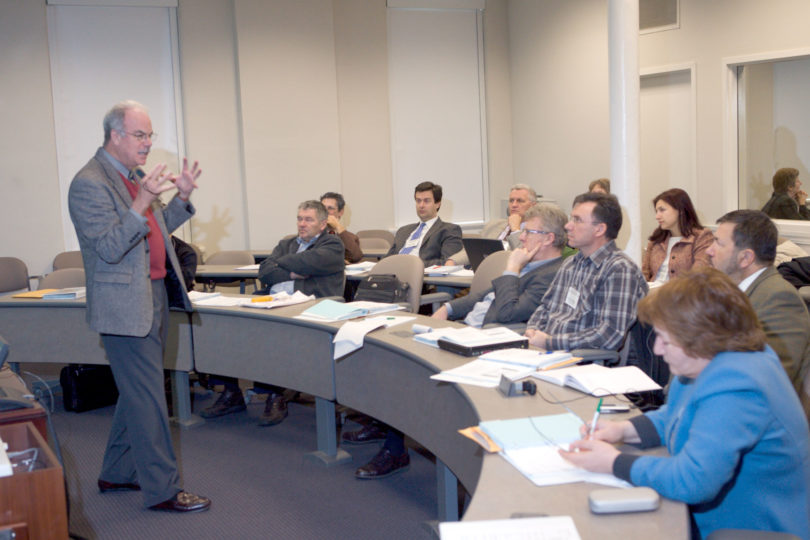 By the end of their week, the group of 16 visiting Croatians were literally surrounded by the signs of what they were up against.

Various workshops in institutional effectiveness, data management and performance indicators had produced large sheets of paper tacked to the wall, listing issues Croatians face as they continue educational reform: Their country’s relationship with the European Union. State budget limitations. Lack of communication and cooperation between units within universities. A society that is decreasing in numbers, has a low socio-economic status and uneven technological growth.

And yet, the room was full of optimistic discussion on how the visiting educators would take what they had learned at UGA and implement these strategies at home.

“All of you are motivated and are what I’d describe as a concentrated, focused minority at your institutions who could lead the revolution,” says Ed Simpson, UGA’s Institute of Higher Education Distinguished Public Service Fellow and organizer of the visit.

Simpson was referring to Croatia’s daunting task of meeting the tenets of the Bologna Accord, an agreement to which 40 European counties consented in an effort to standardize higher education there.

For Croatia, it indeed means a revolutionary restructuring of its system, which is why delegates attended a series of strategic workshops at UGA in mid-February.

Their visit was made possible by a ­Congressionally-directed grant to nurture UGA’s relationship with Croatia, which initially began for the Institute of Higher Education five years ago.

In February 2001, a delegation from the four then-existing universities in Croatia-Osiek, Rijeka, Split and Zagreb-visited UGA as part of a national tour to several U.S. universities. In the midst of their country’s shift from socialism to democracy, the group was seeking ideas on how to aid that process.

Simpson met with the group and began a relationship that would result in his visiting Croatia 10 times in five years, meeting with officials and participating in seminars, often with other IHE colleagues and graduate students.

“In my opinion, an institute such as ours is not worthy of the name in today’s world if there isn’t a strong international dimension,” says Simpson. “Croatia happened as a bit of wonderful serendipity.”

The Croatian visitors balanced workshops with dining at area restaurants, concerts at the Hugh Hodgson Concert Hall, a trip to scenic Madison and a day trip to Atlanta, which included visits to the Georgia Aquarium, the Commission on Colleges of the Southern Association, the Hard Rock Café and the high-rise Westin Sundial Room.

During the workshops, differences emerged between the U.S. and Croatian higher education systems.

Universities in Croatia answer to the Ministry of Science, Education and Sport. There, faculties-comparable to UGA’s schools and colleges-within a university have historically functioned as if they themselves were independent universities under the leadership of their deans.

As Sue Achtemeier, UGA’s director for planning and accreditation, explained the notion of planned outcomes to suit accreditation requirements, talk turned to the American concept of a broad education.

“In many European countries, in our country, we consider that we have to start at the very beginning, specializing,” says Danica Skara, vice rector of the University of Zadar. “In our country, when we started to reform our programs, many in our departments would say that students with bachelor’s degrees are not capable of doing anything because they’ve only had three years.”

Vlasta Vizek-Vidovic, professor and vice-rector for international relations at the University of Zagreb, who has visited UGA before and collaborated with Simpson in the past, noted that the concepts establishing outcomes are there, but in an informal sense in which teachers discuss what they expect students will be able to do in their classes.

“The crucial question is, how will you prove that a student understands the difference between this and that, and how will they apply that?” she says. “Then the fruitful discussion starts.”

UGA’s partnership with Croatian universities is not over, according to Simpson. He and Vizek-Vidovi have planned to develop an institute in Croatia, focusing on higher education.