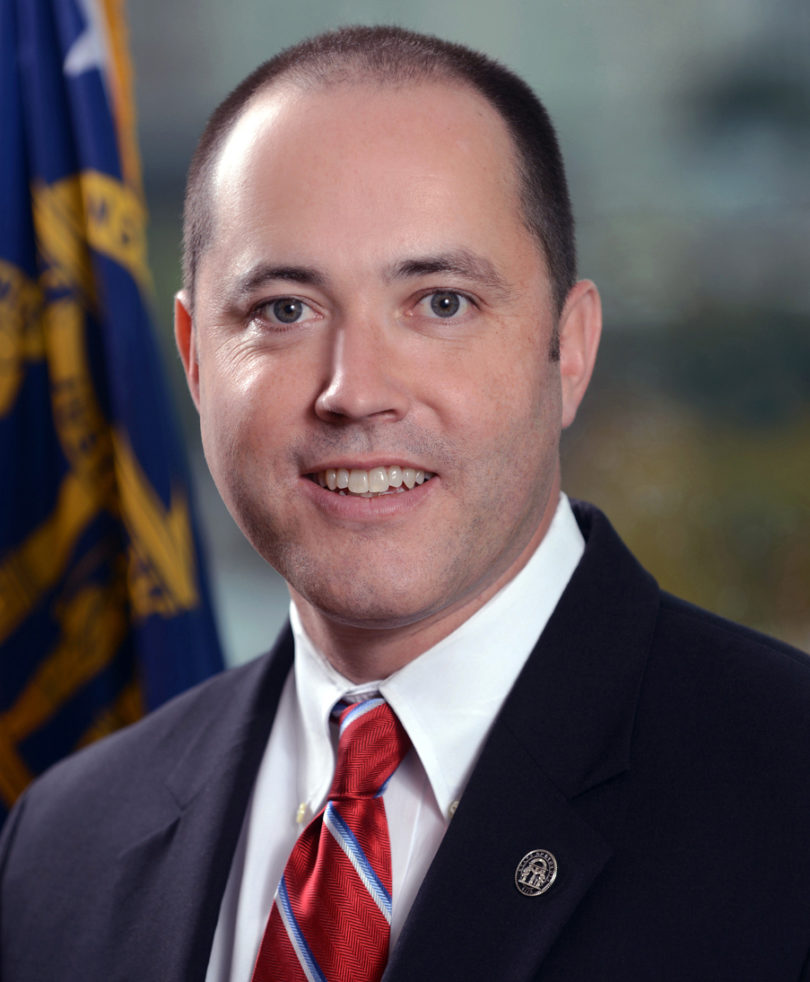 Six UGA alumni, including one who also is a UGA emeritus faculty member, will be honored Oct. 14 at the university’s annual Tucker Dorsey Blue Key Alumni Awards Banquet.

The event will take place in the Magnolia Ballroom of the UGA Center for Continuing Education. The 7:30 p.m. reception will be followed by dinner at 8:15 p.m.

The Blue Key Honor Society is a national organization whose members are committed to leadership in student life, high scholastic achievement, service to others and citizenship. It was established in 1924 at the University of Florida; the second chapter was established at UGA in 1926.

Banquet tickets are $30 for individuals. Sponsored eight-seat silver tables are $300, and eight-seat gold tables are $500. To reserve tickets, contact Janet Lance at 706-542-0017 or jholcomb@uga.edu.

Chris Carr
After being named commissioner of the Georgia Department of Economic Development by Gov. Nathan Deal, Carr joined the agency in November 2013. As commissioner, he leads the state agency responsible for creating jobs and investments in the state through business recruitment and expansion, international trade and tourism as well as the arts, film and music industries.

A 1995 graduate of UGA’s Terry College of Business, Carr also received his Juris Doctor from the UGA School of Law in 1999. The chief of staff for U.S. Sen. Johnny Isakson before joining the GDED, Carr also worked for Georgia-Pacific, practiced law with Alston & Bird LLP and was the vice ­president and ­general counsel for the Georgia Public Policy Foundation. He received the Blue Key Young Alumnus Award in 2005.

Jan Jones
Jones represents District 47 in the state House of Representatives, which includes Milton, Mountain Park and portions of Roswell and Alpharetta in northwest Fulton County.

She was first elected to office in 2003. In 2015, she was elected speaker pro tempore, the second highest position in the Georgia House of Representatives, by her colleagues.

Born in Warner Robins, Jones has lived in Fulton County for 25 years. She graduated with a bachelor’s degree in journalism from UGA’s Grady College of Journalism and Mass Communication in 1980 before receiving an MBA from Georgia State University.

Swann Seiler
The manager of corporate communications for Georgia Power’s coastal region in Savannah, Seiler has worked in public relations throughout her career.

Seiler also served on the Georgia Women of Achievement Board and the Georgia Humanities Council.

A 1978 graduate of UGA’s Grady College of Journalism and Mass Communication, she was named a Grady Fellow in 2008. Seiler currently serves on the Grady Board of Trust, the UGA Libraries Board of Visitors and is an emeritus member of the UGA Athletic Association and the UGA Foundation. She was the first female president of the UGA Alumni Association.

David Shafer
Shafer represents District 48 in the state Senate, which includes portions of Fulton and Gwinnett counties. First elected to office in 2002, he was elected president pro tem in 2013.

A business owner and investor, he has served on the Gwinnett Chamber of Commerce board of directors and is a member of the National Federation of Independent Business.

Shafer graduated from UGA in 1988 with a bachelor’s degree in political science. He has served as a member of the Young Alumni Council and a board member of the UGA Alumni Association. He currently serves on the UGA Board of Visitors.

James Cobb
Cobb received three history degrees from UGA: a bachelor’s degree in 1969, a master’s degree in 1972 and a doctorate in 1975. After teaching at several universities, he returned to UGA as the B. Phinizy Spalding Distinguished Professor in the History of the American South. A former president of the Southern Historical Association, he has written widely in academic and popular outlets about the history and culture of the South.

Cobb twice received the history department’s Parkes-Heggoy Award for Excellence in Graduate Teaching, and he was honored with UGA’s Albert Christ-Janer Award for Creative Research. While on the faculty, he was chair of Franklin College’s history department, was an advisory board member for Georgia Magazine and The Georgia Review as well as an editorial board member for the University of Georgia Press.

Although Cobb retired from UGA in 2015, he continues to direct dissertations and mentor students, and he serves on the UGA Retirees Association Council.

Jane Okpala
Okpala is the lead product specialist on social good and goodwill products at Facebook. Prior to that, she worked for law firms and a business consulting firm in San Francisco and New York City, advising clients ranging from Fortune 500 companies to startups on legal and business strategy across several industries.

Okpala earned a Juris Doctor from Yale Law School in 2007, where she served as a staff member of The Yale Law Journal and The Yale Journal of International Law.