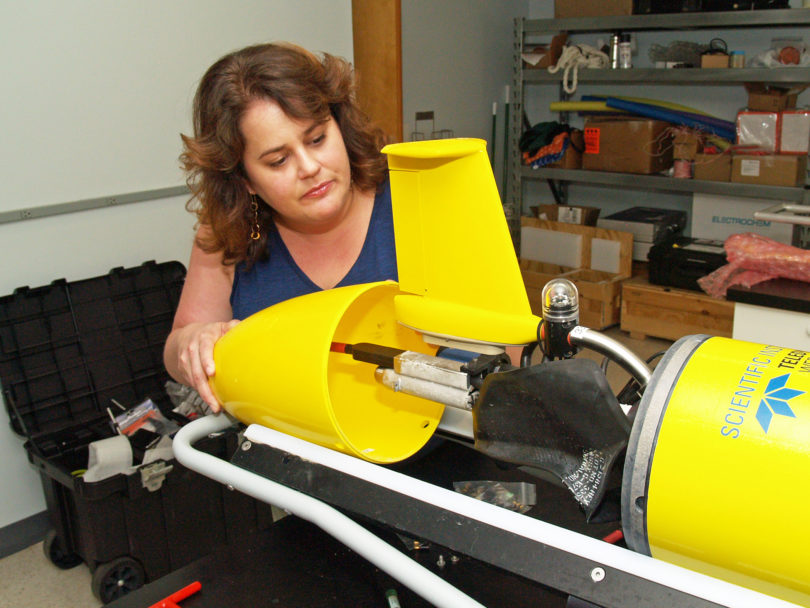 Savannah, Ga. – University of Georgia Skidaway Institute of Oceanography researcher Catherine Edwards is leading a team that has received a five-year, $750,000 grant from the Southeast Coastal Ocean Observing Regional Association, or SECOORA, to establish a regional glider network.

Also known as autonomous underwater vehicles, the gliders are torpedo-shaped crafts that can be packed with sensors and sent on underwater missions to collect oceanographic data. Equipped with satellite phones, the gliders surface periodically to transmit their recorded data and to receive new instructions during missions that can last from weeks to months.

The team will work collaboratively to operate regular glider missions on the continental shelf in an area from North Carolina to Florida known as the South Atlantic Bight. Regular coordinated experiments will involve simultaneous deployment of gliders at multiple locations off Florida, Georgia and North Carolina. Sensors on the gliders will allow the team to map temperature, salinity, density, dissolved oxygen and other scientific data over the entire South Atlantic Bight. The data will help scientists understand ocean processes and how the ocean physics may affect fisheries—for example, the location of fronts or areas of increased productivity where fish often congregate.

“This glider observatory is the first time regular glider efforts have been funded in the South Atlantic Bight and is complementary to larger SECOORA efforts in observing and modeling,” Edwards said. “The work is highly leveraged by contributions from each of the team members and partnerships with fisheries and observing groups at the National Oceanic and Atmospheric Administration and NASA.”

Edwards and her team have designed the deployments with input from fisheries management partners and interests of commercial and recreational fisheries. Gliders will also be outfitted with passive and active acoustic receivers that will record sound and measure signals from tagged fish. Fisheries managers at Gray’s Reef National Marine Sanctuary, state Department of Natural Resources offices, the South Atlantic Fisheries Management Council and others will be able use this information to better understand the ocean “soundscape,” fish migrations and key species use of their habitat.

“The glider missions will contribute important information related to research underway at Gray’s Reef,” said Sarah Fangman, superintendent of Gray’s Reef National Marine Sanctuary. “We have been studying fish movement patterns inside the sanctuary, and the gliders’ acoustic receivers will provide a valuable new tool to expand where we can observe fish movements.”

In addition to regular coordinated experiments with multiple gliders and maximum regional coverage, the project will leverage opportunities to develop regular transects in areas where glider data may be of interest, for example near marine protected areas like Gray’s Reef National Marine Sanctuary and other critical habitat zones designated by the South Atlantic Fisheries Management Council.

The glider data will provide valuable information for validation of ocean models—regional models of ocean circulation funded by SECOORA as well as the larger modeling community. Further, the data will be packaged and used to improve ocean model forecasts.

“We’re sending all of the glider data to the National Glider Data Assembly Center as it comes in so that it can be assimilated into the U.S. Navy’s operational models,” Edwards said. “The gliders will improve Navy forecasts on the fly with real time data.”

Data and maps from the project will be shared freely and made available to the research community, fisheries managers and other stakeholders and the general public in near-real time through SECOORA at http://secoora.org/ and the National Data Buoy Center.