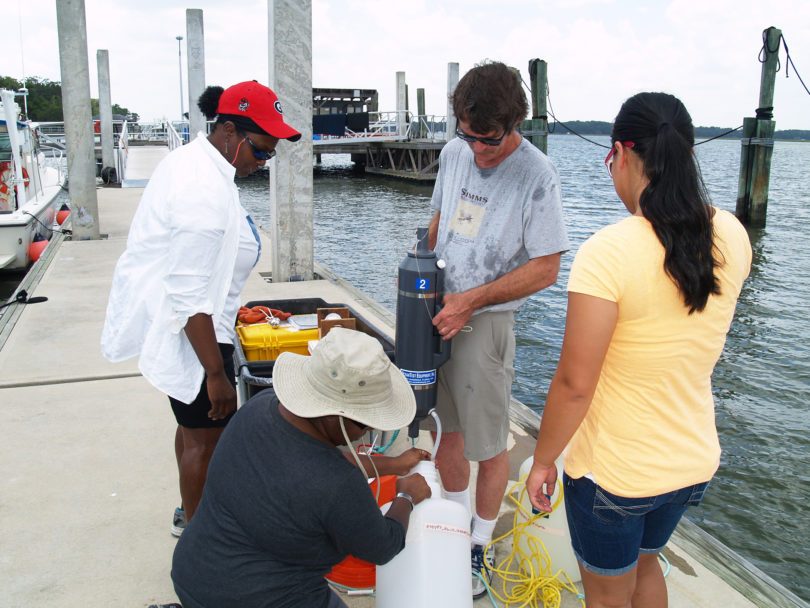 Scientists at the UGA Skidaway Institute of Oceanography joined researchers around the globe in a worldwide Ocean Sampling Day June 21, the summer solstice.

This was the second year Skidaway researchers have participated in the Ocean Sampling Day event. The first was conducted last year, also on the summer solstice. The event focuses on simultaneous sampling of microbes in ocean, coastal and Great Lakes waters.

This year, 191 marine research locations, from the Rothera Research Station in Antarctica to Goteborg University in Sweden, participated. The sampling program supports international missions to provide information on the diversity of microbes, their function and their potential economic benefits.

“It’s a global effort to take a snapshot of microbes across the world’s oceans at the same time, on the same day, in this case, the summer solstice,” said Marc Frischer, Skidaway Institute professor.
Frischer cited the significance of the project by describing microbes as the “engines of our planet” and said half the oxygen in the atmosphere is produced by microbes in the ocean.

“We helped Gray’s Reef by collecting and processing their samples in the way they needed to be done,” Frischer said. “You really need a laboratory for that, and we were able to provide that.”

One goal of the global project is to note the commonalities and the differences among the microbial communities around the globe. Some of those differences were seen just in the samples collected at Gray’s Reef and at the Skidaway campus, two sites only 40 miles apart.

“We generally observe a larger number of smaller organisms out in the ocean, which makes sense because they are adapting to a system with lower nutrients,” Frischer said. “We also saw a different kind of photosynthetic organism since there is much more light available in the ocean compared to the rather turbid waters in our estuary.”

All samples and data were sent to Bremen, Germany, for DNA extraction and sequencing to ensure maximum comparability. The resulting data will be made public as soon as quality checks are finished.

These cumulative samples, related in time, space and environmental parameters, will provide insights into fundamental rules describing microbial diversity and function and contribute to the blue, or oceanic, economy through the identification of novel, ocean-derived biotechnologies.

Jointly coordinated by Jacobs University in Bremen, Germany, and the University of Oxford in the U.K., Ocean Sampling Day is part of the European Union-funded Ocean of Tomorrow research project Micro B3.

“It is really important to have a global perspective,” Frischer said. “We are glad we can participate in what they are now calling ‘gigascience’ where we are collecting a snapshot from all over the world. It is amazing.”