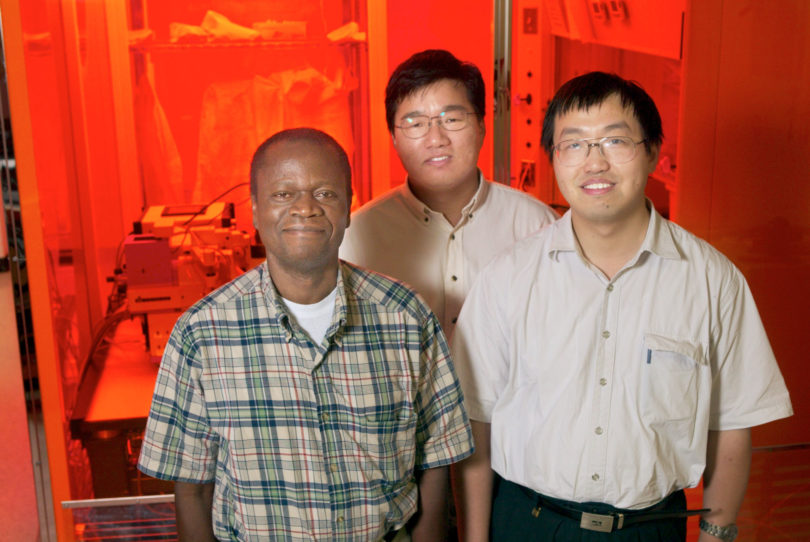 Diabetics who must frequently monitor their blood sugar levels can take heart. UGA researchers are developing tiny sensors that could eliminate the need for all those finger sticks.

“There are lots of problems with the current technology [for measuring blood sugar],” says Guigen Zhang, one of three main researchers on the project. “It’s not particularly accurate or stable, and it’s especially hard for children.”

Zhang and his colleagues, bioengineer William Kisaalita and physicist Yiping Zhao, are working to create the first generation of nanoscale biosensors, funded by a four-year, $1 million National Science Foundation grant.

Nanotechnology is the study and design of nanoscale systems-those ­literally measured in nanometers, or billionths of a meter.

“The idea is to create devices that can be imbedded in the body to monitor conditions-in this case, glucose for diabetes,” says Zhang, a bioengineer in the College of Agricultural and Environmental Sciences. “But the application potential for this nano­technology is very broad. We can imagine adapting it for food safety, to monitor the environment, for biodefense.”

So: how does one go about making something on such a small scale? And further: how does one make a functional structure at that scale?

That task, for this project, falls principally to Zhao, who uses a technology called glancing angle deposition, or GLAD, to create nanostructures. With GLAD, substances like metal or silicon are heated until they vaporize; they can then be manipulated to create structures.

“The unique part is that these are well-controlled structures, not random,” Zhang says. “The GLAD technology is not new. But using it to make nanostructured devices is relatively new, and using it as we are is very, very new.”

However, before the scientists start work on the structures, they must first address two basic problems that occur with any biosensor, large or small.

The first is biofouling, which occurs when the sensor mechanism gets blocked. Molecules-often proteins-can mar the surface of a nanoscale ­biosensor in the same way that dust ­particles can interfere with satellite reception.

When this happens, “it blocks the reaction of the sensor,” Zhang says, “and interferes with the sensor’s ability to track signals.”

The other critical issue is long-term calibration. Sensor devices must be calibrated regularly, in the same way bathroom scales must regularly be reset at zero.

Solving the problem of how to recalibrate minute, implanted nanodevices will have broad applications for the whole of nanotech­nology, particularly nanobiotech­nology, Zhang says.

Almost 17 million people in the United States have diabetes, according to the American Diabetes Association. Many must monitor their glucose level several times each day. And each time they must draw blood from a finger, hand or arm.

Helen Brittain, 54, has been sticking her finger five or six times a day for almost 20 years.

“You have to get used to it, but I’d rather not have to do it,” she says. “I spend a lot of energy keeping myself balanced.”

Nanobiosensors will provide more accurate readings than these traditional approaches, Zhang says, because many tiny sensors are better than one larger one and increase the sensitivity of the sensing. Creating more accurate and convenient measuring systems, he says, will have a “huge social impact.”

“We’re excited at many levels by this project,” he says. “By harnessing interdisciplinary expertise at UGA, we’ve not only brought federal dollars to Georgia but we have the opportunity to play a significant role in very cutting-edge technology.”