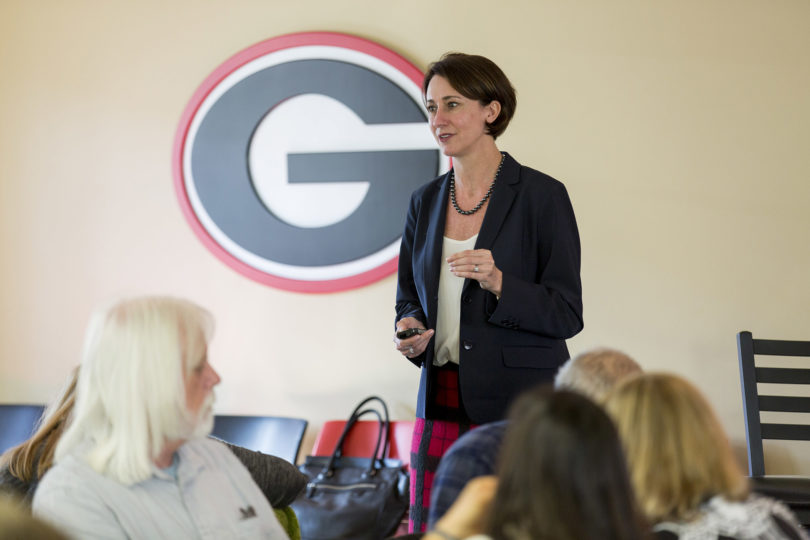 There is something special about the UGA experience and its impact on Georgia and beyond. Faculty and staff know it; so do students and alumni.

That something special is what makes Karri Hobson-Pape, UGA’s new vice president for marketing and communications, so eager to share the university’s story with the state and the nation.

“It’s so evident that there is a deep passion associated with the University of Georgia,” said Hobson-Pape, previously the co-founder and partner of Inflexion Point Marketing Group in Atlanta. “I believe something very special exists at this university. It’s more than loyalty. It’s more than a place to go to college. There’s a deep commitment that people share for generations at the University of Georgia.”

Hobson-Pape is leading efforts to define that special something—and find effective ways to tell that story. In the coming months, Hobson-Pape and the Division of Marketing & Communications will collaborate with faculty, staff, students and alumni as the university begins to roll out new marketing and branding strategies.

On Jan. 1, Hobson-Pape succeeded former Vice President for Public Affairs Tom Jackson in the renamed Division of Marketing & Communications. Under Hobson-Pape’s leadership, the division will continue to serve as the central communications office for the university but also will be implementing marketing strategies for the university as it gears up for a comprehensive fundraising campaign.

With 20-plus years in the field, Hobson-Pape describes marketing as a combination of art and analytics.

“It’s really the craft of beautiful and powerful creative work married with smart planning and metrics,” she said.

Hobson-Pape has always been attracted to the intersection of the humanities and numbers. As an undergraduate at Vanderbilt University, Hobson-Pape studied anthropology and communications before finding a career in marketing. She would go on to work with major companies like IBM and GE Capital. After she went to Emory University’s Goizueta Business School to get her M.B.A., she became the school’s executive director of external affairs and helped build the business school’s marketing capabilities.

Later, she co-founded a marketing consulting firm and remained plugged into academia-helping develop strategies for higher education institutions in Georgia. As executive director of the Sheth Foundation, which supports the academy of marketing, Hobson-Pape has been working with faculty at institutions across the nation.

What is special about public universities—particularly flagship universities—she said, is their capacity to improve their states and beyond. An eagerness to become part of shaping a better Georgia is what inspired Hobson-Pape to join UGA.

As she engages in her job at UGA, Hobson-Pape has two main goals for the coming year. The first is to help facilitate a strategic branding initiative to guide marketing efforts.

Hobson-Pape likens a branding initiative to an ethnographic study to excavate the values and distinctive qualities of an organization.

“A brand describes the reason for being,” she said. “It has to be authentic to an organization. It has a full inventory of experiences of that organization, including history, traditions and a vision to the future.”

A committee of people from a diverse cross-section of the university community already has begun work on the branding initiative using previous marketing research to help guide the efforts.

The results, Hobson-Pape said, will help the university tell its distinctive story.

“Building on the university’s existing strengths, loyalty and reputation, these branding efforts are aimed at elevating the national reputation of the university,” she said.

The progress of the initiative will be closely coordinated with the Division of Development and Alumni Relations in preparation for the public phase of UGA’s comprehensive campaign. But the results of the branding initiative will continue to be used for years to come.

“The purpose of this initiative is to create a positioning that can be used at the university level,” she said, “but is also customizable for individual colleges, schools and units.”

Hobson-Pape’s other goal is to set up marketing infrastructure to help activate effective communication across the university.

“We’re building upon the established foundation,” she said, “and adding the marketing functions of planning, research and analysis so that we can better implement communication channels and tactics.”

As a marketing insider, Hobson-Pape has been a participant in the rapidly evolving landscape in the field. Since the advent and rise of social media platforms, institutions can have greater interaction with their audiences. To excel at telling UGA’s story, university communicators need to be innovative in how they connect with their audiences.

In collaboration with the university’s schools and colleges, Hobson-Pape said, the Division of Marketing & Communications will be moving to a position where it can pilot new strategies and measure what is working. Those tools and best practices can be shared with communicators throughout UGA’s schools, colleges and units.

Once again, collaboration will be key.

“The greatest tools we have at a university—the greatest brand ambassadors—are faculty, staff, students and alumni,” Hobson-Pape said. “We need to make sure they are engaged in this process so they can help us share the story and share the message.”

There are a few strategies Hobson-Pape already believes will work.

Traditionally, universities promote themselves by touting their achievements, rankings and statistics. Those measures are important, said Hobson-Pape, but the university can go further.

“The transition is going to be sharing the impact we’re making in the world,” she said. “The work UGA is doing today is changing the world. It’s changing future generations. And we’re going to tell that story in a way that resonates with audiences.”