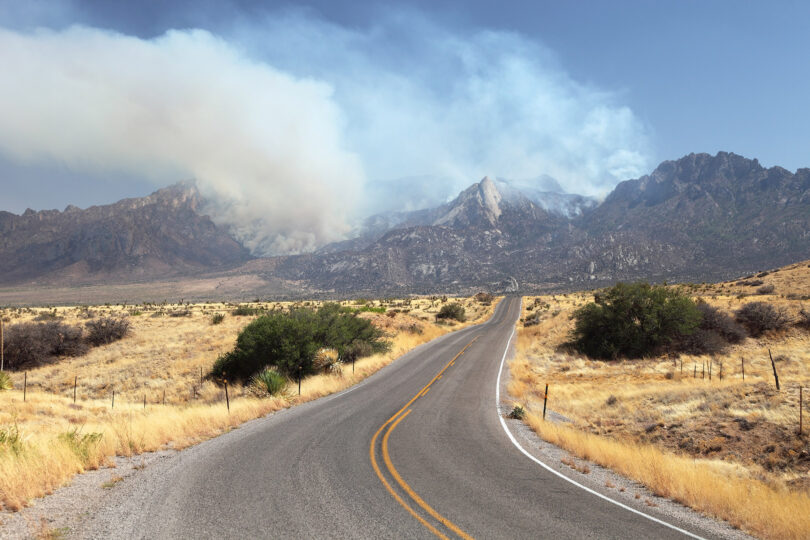 Emissions, like smoke from wildfires and exhaust from vehicles, go through chemical changes when they enter the atmosphere. New research from the University of Georgia shows, for the first time, that these changes may affect what kind of treatment patients need to combat exposure to such pollutants.

“We found that after emissions entered the atmosphere, there were changes in chemical composition that affected how they expressed their toxicity,” said Rawad Saleh, assistant professor in the College of Engineering. “The toxicity mechanisms are different if you’re exposed to smoke directly from a fire, versus after it spends time in the atmosphere.”

For the study, published in the journal Atmospheric Environment, Saleh and a team at UGA burned biomass—oak foliage, pine needles and hickory twigs—in an environmental chamber, then used UV radiation to initiate photochemical aging of the emissions. In a laboratory setting, they exposed human lung epithelial cells to the resulting aerosol.

How do wildfires affect the lungs?

The aerosol created by biomass burning is toxic to human lung epithelial cells, and the team’s results indicate that the type of exposure—fresh smoke versus aged smoke, for example—affects cells in different ways. Fresh smoke is worse at causing damage to mitochondria, which process food and produce energy at the cellular level. Aged smoke causes more oxidative stress, which can lead to cell death. Though damage from emissions exposure may be caused in different ways, on the surface it can appear to be the same.

“There may be multiple people exposed to emissions from a forest fire that develop chronic obstructive pulmonary disease,” Saleh said. “But our results suggest that someone exposed to fresh smoke, like a firefighter, might need different treatment for COPD than someone exposed to aged smoke 50 miles away from the fire. That’s because the mechanisms causing the disease are different.”

Elucidating these mechanisms will become more important, according to Saleh, as the pollutants in our atmosphere change over time. Human-caused emissions from sources like vehicles are being reduced as technology improves, but forest fires are increasing their share of pollution as climate change creates warmer, drier conditions.

“Historically, people used to think that emissions from forest fires or burning wood are not as toxic as burning fossil fuels, but they have similar levels of toxicity,” he said. “Ten to 20 years from now, most of the things we breathe that are harmful will probably come from a forest fire somewhere in the world.”