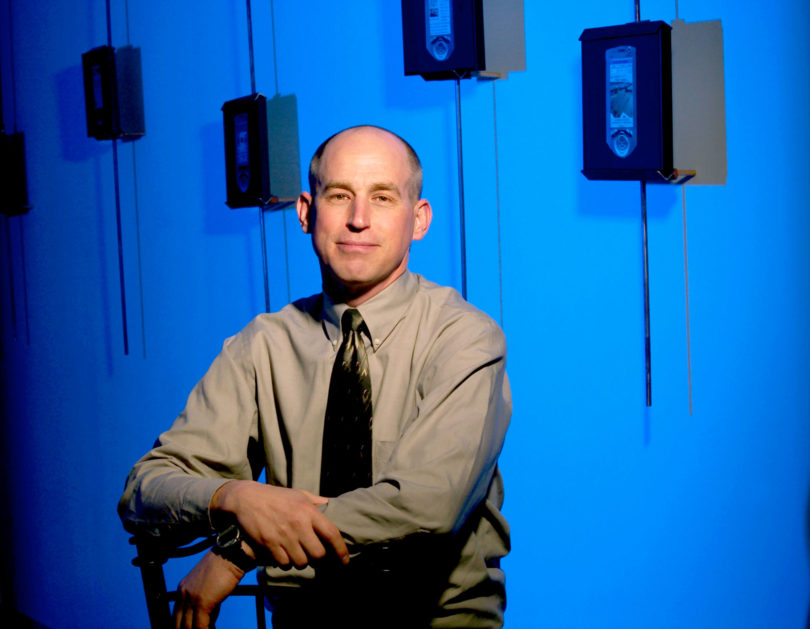 “How many people would say the world is really a better place because of cell phones?” asks Scott Shamp, director of UGA’s New Media Institute.

Hardly anyone, he answers. Instead, “most people consider their cell phone a necessary evil,” he says, “an annoyance and intrusion. But it doesn’t have to be that way.”

Indeed, the cell phone’s very ubiquity “is what gives it power as a social tool,” he says, and the NMI is exploring the ways that mobile media can improve people’s lives.

On Dec. 10, the NMI hosted the Positive Power Mobile Media Workshop, in which six teams of visiting scholars, artists, technicians and local experts made short video documentaries with their Nokia N90 video phones.

The themes of the documentaries covered poverty, homelessness, AIDS, alcohol and drug abuse, race relations and transportation issues, and are available for viewing online (www.nmi.uga.edu/mmworkshop/).

“And the crazy thing was that they had to shoot, edit and push their videos to phones in just 10 hours using only a cell phone camera,” says Shamp.

Shamp first saw still camera and video capabilities on cell phones at a wireless convention in New Orleans four years ago. However, seeing the kinds of photos most people were interested in taking on Bourbon Street convinced him that there must be a more socially responsible way to use the technology, he says.

Last year at a conference, Shamp and some digital media colleagues from around the country began discussing ways to encourage pro-social uses of mobile media.

“We realized that we need to jumpstart innovation in mobile media by bringing together creative individuals with technologists,” he says. “That is when we came up with the idea of Positive Power…(The workshop) was a really wild day, but it got people thinking hard about mobile media. It’s exciting to work with artists who have a commitment to improving social situations and are willing to try new things with new technology.”

Shamp recognizes that a national movement of using the cell phone as an instrument of social change requires “a radical re–examination of the way we think about cell phones.”

The movement may well start with UGA students who are benefiting from the Mobile Media Consortium, an academic and industry partnership that the NMI created last year with such companies as Intel, Cingular Wireless and Nokia.  The Mobile Media Scholars who participate in the consortium work with the companies on research and developing prototype applications.

“What really encourages me is that they’re willing to invest in finding pro-social applications,” says Shamp. “The industry gives us money and we bring in the students, and the students are like Petri dishes for mobile media ideas.”

The momentum provided by Positive Power workshop doesn’t end with the Web site of the documentaries. Shamp says that the films will be shown this April at the International Digital Media Arts Association conference in Oxford, Ohio.

Also this spring, the NMI plans to recreate the filmmaking workshop in a new, virtual way—by sending video phones to students at other colleges in advance, giving them 10 hours on a specific day to complete a movie and then having a video conference between student filmmakers and UGA judges.

The goal, says Shamp, is “to engage creative people in a bunch of other places to think about what this technology can do for them in their towns. That is how good things happen.”

Do you remember the first time you saw a cell phone?

It was a mobile phone that was a big device – a suitcase with a phone attached to it. It was a big deal. I can remember wondering why I’d ever need that. I couldn’t figure out what anyone would do with that. I wondered if this was a solution in search of a problem – if it was a technology people would ever need. I was wrong.

I have more than one, but I only use one. I have them all in my pocket spilling out at any given time. I use the Nokia 6620 – I can’t believe I ever started memorizing model names of phones. I’m in the process of segueing into the Nokia N90.

It’s all about convergence, more functionality built into one phone. I have my cell phone, my video phone, my iPod – I want all of those in one. National Public Radio each week does a podcast of book reviews, and my iPod automatically has the latest version… I’ve got to have that capability built into my cell phone. The functionality of the iPod. So, music, audio, and video. And bigger numbers. As you get older, you can’t see these numbers – I have to get out my glasses to send text messages. And a better battery. I dream a lot about it.

What is your favorite feature in existing cell phone technology?

I find text messaging to be really very interesting. It’s that new type of connectivity. I remember my first text message. I sent “I love you” to my oldest son. And the message I got back was, “Don’t ever do that again!” He was with his football buddies when he read the message. He told me I had to stop doing things like that.

I’ve got the dorkiest ring tone ever. I’ve got the default Nokia ring tone. My wife has a salsa on hers. My youngest son has gotten creative enough to have a music clip. I’m Mr. Default Ring Tone.