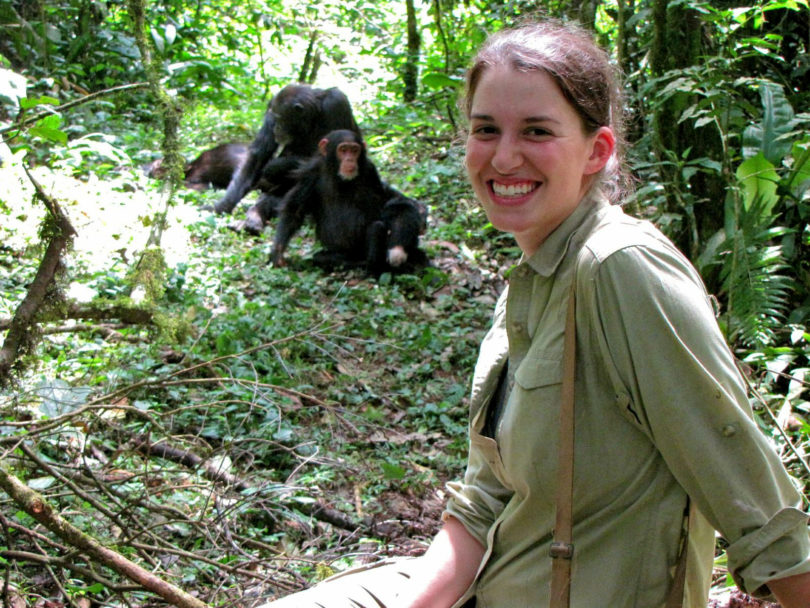 Athens, Ga. – Many think of social networks in terms of Facebook friends and Twitter followers, but for recent University of Georgia doctoral graduate Julie Rushmore, social networks are tools in the fight against infectious diseases.

Rushmore, who completed her doctorate in the Odum School of Ecology in May, analyzed the social networks of wild chimpanzees to determine which individuals were most likely to contract and spread pathogens. Her findings, published in the Journal of Animal Ecology on June 5, could help wildlife managers target their efforts to prevent outbreaks and potentially help public health officials prevent disease in human populations as well.

Effective disease intervention for this species is important for a number of reasons. Wild chimpanzees are highly endangered, and diseases—including some that also infect humans—are among the most serious threats to their survival. And due to habitat loss, chimpanzees increasingly overlap with human populations, so disease outbreaks could spread to people and livestock, and vice versa.

Disease prevention in wildlife is logistically challenging, and resources are scarce, Rushmore explained. Even when vaccines are available, it is impractical to vaccinate every individual in a wildlife population. She and her colleagues decided to use social network analysis to pinpoint individuals most important in disease transmission.

“Modeling studies in humans have shown that targeting central individuals for vaccination is significantly more effective than randomly vaccinating,” Rushmore said. “There have been a few social network studies in wildlife systems—bees, lions, meerkats, lizards and giraffes—but this is the first paper to map out social networks in the context of disease transmission and conservation for wild primates.”

Rushmore observed a community of wild chimpanzees in Kibale National Park in Uganda, recording the interactions of individuals and family groups over a nine-month period to determine which individuals—and which types of individuals—were most central.

“Chimpanzees are ideal for this study because to collect this observational behavioral data, you don’t need to collar them or use any invasive methods. You can essentially just observe chimpanzees in their natural environment and identify them individually based on their facial features,” she said.

Rushmore collected information about the traits of individual chimpanzees including age, sex, rank and family size. Rank for adult males was based on dominance, while for adult females and juveniles it was based on location: Those that lived and foraged in the interior of the community’s territory were considered of higher rank than those that roamed its edges.

From December 2009 to August 2010, Rushmore recorded the interactions of chimpanzees in the community at 15-minute intervals between 6 a.m. and 7:30 p.m., four to six days per week. She mapped her observations onto a diagram showing how often each individual associated with the others.

This analysis revealed that the most central figures in the network turned out to be high-ranking mothers and juveniles with large families. “They form nursing parties—essentially like day care—where several families will hang out together,” she said. “In that way they become quite central because they have contact with a large portion of the community.”

Second in centrality were the high-ranking males.

“There are many studies in humans, and at least one in chimpanzees, showing that from an immunological perspective, juveniles and children are really important for maintaining diseases in populations through play and things like that,” she said.

“In addition, high-ranking male chimpanzees are often immunosuppressed because they have high levels of testosterone and have been shown to have higher rates of parasitism. So it seems that in addition to being central to the network, the juveniles and the high-ranking males in particular could also have lower immunity than other individuals, which might help facilitate them acquiring and transmitting pathogens.”

Rushmore’s findings have implications for disease prevention beyond chimpanzees.

“This work can easily be applied to other systems,” she said. “You could use similar methods to identify which traits are predictive of centrality. The theme that would carry over from our findings is that these central individuals are likely important to target for vaccination or treatment.”

Rushmore and her colleagues are continuing their research into social networks and disease. They currently are using infectious disease models to simulate outbreaks on these networks and to develop targeted pathogen interventions.

“Ultimately, we want to develop vaccination strategies that could both prevent large outbreaks and lower the number of animals requiring vaccination,” Rushmore said.

Funding was provided by the U.S. Fish and Wildlife Service Conservation’s Wildlife Without Borders program, the Morris Animal Foundation, the Fulbright Scholars program, the Margot Marsh Biodiversity Foundation, the Primate Action Fund, Graduate Women in Science, the ARCS Foundation and the National Science Foundation, with support from the Kibale Chimpanzee Project, the Uganda Wildlife Authority, the Uganda National Council for Science and Technology and the Makerere University Biological Field Station.

For more information on the Odum School of Ecology, see http://www.ecology.uga.edu/.