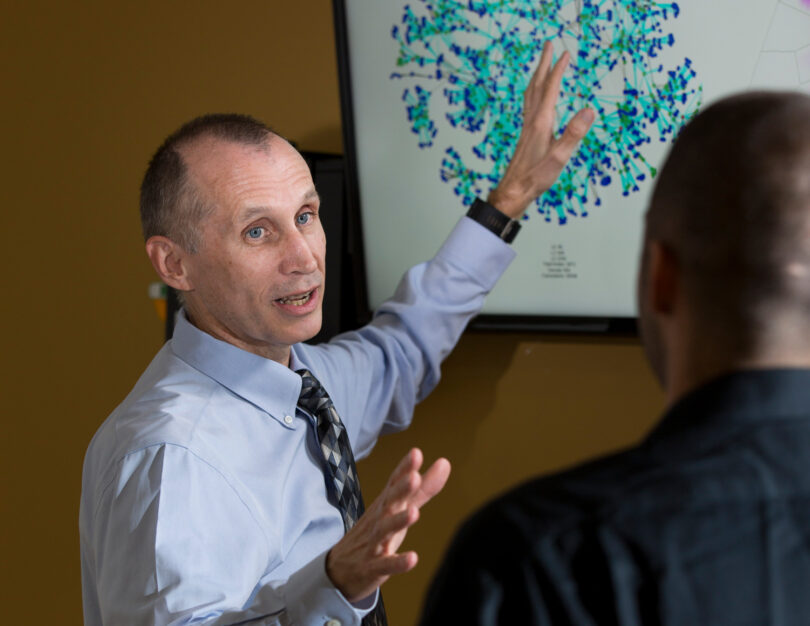 Christopher Whalen holds the Karen and Jim Holbrook Distinguished Professorship in Global Health, one of 94 endowed faculty positions created by private support during the Commit to Georgia Campaign. (Photo by Andrew Davis Tucker/UGA)

The final months of the Commit to Georgia Campaign were likely not what UGA leaders envisioned when the effort launched. After years of record-breaking fundraising and significant strides in every campaign priority, the novel coronavirus presented a sudden threat that required a total re-evaluation of how people live their lives.

As the world continues to reckon with COVID-19 and its effects, “Solving Grand Challenges,” the third Commit to Georgia Campaign priority, has become a more urgent mission. But even now, in the face of a global pandemic, the work of UGA donors has positioned the university to better tackle crises and build a brighter future.

Since the campaign’s launch, private support created 94 endowed faculty positions, an increase of 42%. These positions allow UGA to attract and retain world-class talents like Biao He, the Fred C. Davison Distinguished University Chair in Veterinary Medicine and a Georgia Research Alliance Distinguished Investigator, and Samantha Joye, the Athletic Association Professor of Arts and Sciences in UGA’s Department of Marine Sciences. These individuals will inspire generations of students and place UGA’s research enterprise among those of the nation’s finest public universities.

UGA faculty are training entrepreneurs to create new businesses that will invigorate Georgia’s economy, improve public health internationally, and support farmers and agricultural leaders to feed the world. Thanks to the productivity of its faculty, research and development expenditures at UGA reached $477.5 million in FY19, a 34% increase over the previous five years.

“As UGA grows its research enterprise, we are expanding our positive impact on the world while strengthening the economy of our home state,” says President Jere W. Morehead JD ’80. “Gains in agricultural productivity; improvements to health care; the creation of new, marketable products—these are just a few of the many benefits stemming from UGA’s research and development.”

The university generates an annual economic impact of more than $6.5 billion in Georgia —$1.25 billion more than at the campaign’s public launch—and research is a prime catalyst. Because of a commitment to translate research into real-world solutions, UGA has ranked among the top five American universities for bringing new products to market for five years in a row. Over 175 companies have been created based on UGA research, an increase of 150% since 2015.

Efforts to connect UGA research to industry have only increased during the campaign, and an initiative bolstered by campaign giving will enable those efforts to expand even further. The Innovation District comprises a comprehensive ecosystem of places, programs, and people partnering to foster innovation, entrepreneurship, and experiential learning. Its next phase of development will create a hub location for the program by renovating UGA’s Spring Street Building. Also, the new Student Industry Fellows Program will offer training to develop students’ innovation competencies, projects funded by a $3.5 million commitment from The Delta Air Lines Foundation.

Just as critical to UGA as making and commercializing research breakthroughs is ensuring that Georgians across the state benefit from the university’s resources. From the creation of an endowment to support community leadership programs across Georgia, to an endowment established to recognize outstanding consultants with the Small Business Development Center, to a planned gift supporting the Office of Service Learning, UGA’s supporters have proved again and again that the Commit to Georgia Campaign is about committing to all of Georgia.

But perhaps the best indicator of progress in the campaign’s third priority is that when a truly grand challenge emerged—the novel coronavirus—UGA was able to quickly join the global effort to combat it. Campaign donors believe UGA could become a national and global research leader, and their commitments empower researchers like Ted Ross, Georgia Research Alliance Eminent Scholar of Infectious Diseases. Ross was awarded a National Institutes of Health contract of up to $130 million to create a universal flu vaccine, but when the pandemic hit, he and other researchers in the UGA Center for Vaccines and Immunology and the Department of Infectious Diseases pivoted their work to focus on developing and testing COVID-19 vaccine candidates and therapeutics.

“Solving Grand Challenges” may feel much more urgent today than it did four years ago. And new grand challenges seem to arise every day. But because of UGA donors, and the hard work of our entire community, we are better equipped to overcome those challenges and be ready for the next one.

Whether conducting research or assisting Georgia communities, every area of campus contributes to UGA’s research enterprise and public service mission. Throughout the campaign, donors have empowered university units to solve grand challenges in our state and world.

College of Environment and Design

The Karen and Jim Holbrook Distinguished Professorship in Global Health, currently held by Christopher Whalen (left), was established by the Holbrooks to build upon existing strengths in global health research throughout the college and increase international collaborations. A similarly named graduate fellowship funded by the couple will expand experiential learning activities for students in international public health.

Kathryn ABJ ’82 and Darren Ash BBA ’81,MACC ’82 established the Ash Service Award to cultivate and support a culture of locally focused community service within the UGA Honors Program. Awards support two to four Honors students who intern full-time in the summer on behalf of a service organization in Georgia, supporting programming that improves local communities. 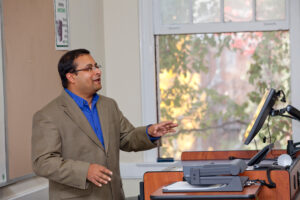 College of Family and Consumer Sciences

When Raj BBA ’94 and Shruti Chokshi established the Bluerock Professorship in Financial Planning, they funded the first-ever endowed professorship in UGA’s financial planning program. Swarn Chatterjee (left), who has been at UGA since 2007 and has won multiple awards in teaching and research, was named to the position in August 2019.

College of Agricultural and Environmental Sciences 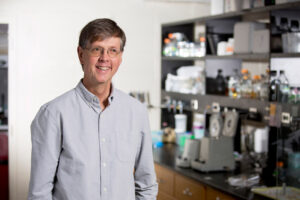 A gift from the family of Michael and Elaine Pulliam established the H.M. Pulliam Chair, the college’s first endowed chair. In late 2019, Michael Strand (right), a professor of entomology and a member of the National Academy of Sciences, was named the inaugural chair.

The Thomas P. Holland Distinguished Professorship in Nonprofit Management and Leadership was created by gifts from School of Social Work donors to honor Tom Holland, a beloved professor emeritus, architect of two of the school’s graduate degree programs, and founder of the Institute for Nonprofit Organizations.

Over the course of the campaign, contributions from numerous donors helped create 16 new named professorships in Franklin College’s many schools, including the Carl and Sally Gable Distinguished Chair in Southern Colonial American History. Renowned historian and anthropologist James F. Brooks was named the inaugural chair in 2019.

School of Public and International Affairs

The Thomas P. and M. Jean Lauth Public Affairs Professorship, named for SPIA Founding Dean and Professor Emeritus Thomas Lauth and his wife Jeannie, was created through gifts from Maj. Gen. Arnold MA ’76 and Jan Punaro. Amanda Murdie (left) became the inaugural Lauth Professor of Public Affairs in December 2018. Murdie, head of SPIA’s international affairs department, has published over 50 articles in the Journal of Politics, British Journal of Political Science, International Organizationand more, and she is the editor-in-chief of International Studies Review.

A $1.5 million gift from Jack and Nancy Fontaine to The Fontaine Center allowed the center—which provides substance misuse prevention, early intervention, counseling and recovery support services, and violence prevention services—to increase the capacity of its Collegiate Recovery Community, as well as expand its programming on campus and throughout the state. The Fontaines have provided nearly $6 million to the center since its 2006 opening.