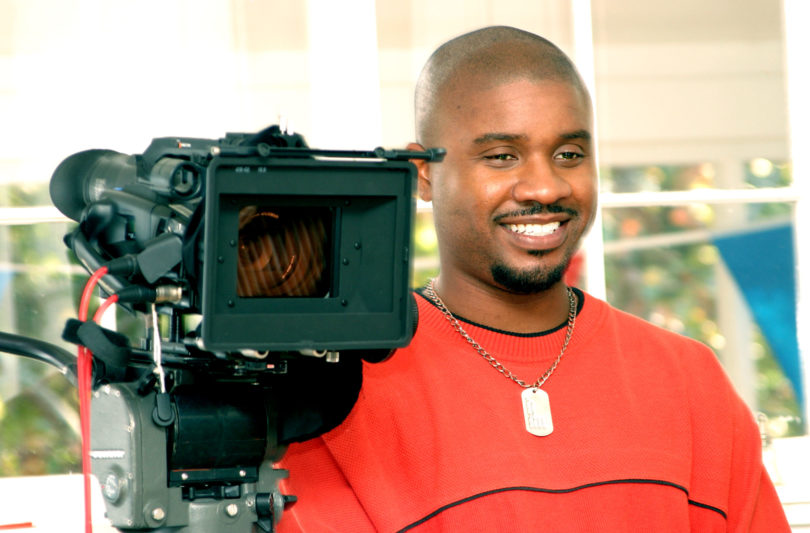 Hadjii Hand’s first name is a nickname that his father gave him as a child. There are a lot of different meanings for the word, he says, but “the one I roll with is, ‘Messenger from God.’

“What does Nate mean?” he immediately teases, glancing at Nate Kohn, associate professor of telecommunications. “Nate means nothing!”

Hadjii (who goes by his first name alone) was in the first class Kohn ever taught at the university—writing for electronic media, the same class Hadjii teaches now at UGA as an adjunct professor. It wasn’t long before the two formed an easy friendship that outlived Hadjii’s 1998 graduation, and that led to the production of the film Somebodies, which has the prestigious honor of being screened at Sundance Film Festival in Park City, Utah, held Jan. 19-29.

More than 3,100 films were submitted to the festival; of the 1,004 submitted films for the dramatic category of the independent feature film competition, only 16 were selected to be screened. Kohn does not act surprised that Hadjii’s is among the chosen few—after all, this is the man Kohn calls a “triple threat.” Hadjii wrote, directed and starred in the college comedy set in Athens; Kohn and his wife, Pamela, produced it.

Kohn recognized Hadjii’s talent when he was his student.

“He came after class and said, ‘Read this’,” he recalls. “It was an episode of Seinfeld he had written, and it was really good. I encouraged him to write not just about Jewish folks in New York, but people he knows.”

Hadjii had tried his hand at writing about his own experiences before. His interest in writing began as a child, when he would draw comic books and occasionally find and read the short stories that his father had written and left lying around the house.

In middle school came the pivotal moment—seeing the Spike Lee film Do the Right Thing. He found he could relate to it at once.

“It was the first time I saw a movie about people, a neighborhood, complaining about how hot it was outside,” he says. “I thought, ‘I could deal with this.’ ”

Viewing John Singleton’s Boyz n the Hood soon after inspired him to try writing his own screenplay, and as a high school student, he wrote his first script: The Weekend, about a Friday night some mischievous South Georgia teenaged boys spend in Florida—not so far removed from his own reality, he notes.

Hadjii would later write and film the mockumentary The Making of Brick City, which earned a spot in the Hollywood Black Film Festival and was reviewed in L.A. Weekly magazine. Yet Hadjii says that he feels most comfortable in writing for television; indeed, Somebodies began life as a script for a television pilot.

In fact, he sent the script for the television version of Somebodies to various networks, “who liked it but didn’t know what to do with it,” Hadjii says. So, he switched tactics and made his television script a film script.

When Hadjii approached the Kohns to produce the film, “We agreed,” says Nate Kohn. “He’s just an extraordinarily talented writer and has proven to be a talented director.

“In the script,” he continues, “he showed us a world I’d never seen before, of African Americans from a strong family and church background who are trying to make it in the world today. He’s very strong at writing dialogue that’s realistic, funny and insightful. His scripts work on many levels. On the surface, they’re very funny. Beneath that, there’s a social conscience at work.”

The film revolves around Hadjii’s Scottie, a college student floating directionless through life, and the varied characters who attempt to guide him—including girlfriend Diva (played by Atlanta actress Kaira Whitehead), as well as an eccentric collection of ministers, roommates, aunts, uncles, cousins and even an inmate or two.

Production and post-productions lasted a year, and they submitted Somebodies to Sundance last fall. Hadjii and Kohn found out it was accepted—an honor film critic Roger Ebert has called “the most important thing that can happen to an independent film”—the day after Thanksgiving.

“It was a big surprise,” recalls Hadjii.  “I didn’t believe it, to be perfectly honest…it was too good to be true.”

“We view Sundance as a launching pad for both Hadjii’s career and the career of Somebodies the television series,” adds Kohn.

Hadjii is already working on scripts for the television version of Somebodies; he also has a semi–autobiographical novel ready to shop around called Staged Persona: A Manual Biography. Spurred by the momentum from Somebodies, another feature film set in Athens (and written by another one of Kohn’s former students, Allison Firor) is in the works, and Hadjii is set to direct.

“What we’re really wanting to do with Hadjii is to build a regional film industry based out of Athens,” says Kohn. “The technology now allows us to do that, and Georgia is as good a place as nay to create an independent motion picture industry.”

In the meantime, Hadjii is simply hoping for a national release of Somebodies so that his family can finally see it.

“God willing, we’ll have a big premiere in Athens, with the red carpet and all of that stuff,” he says.