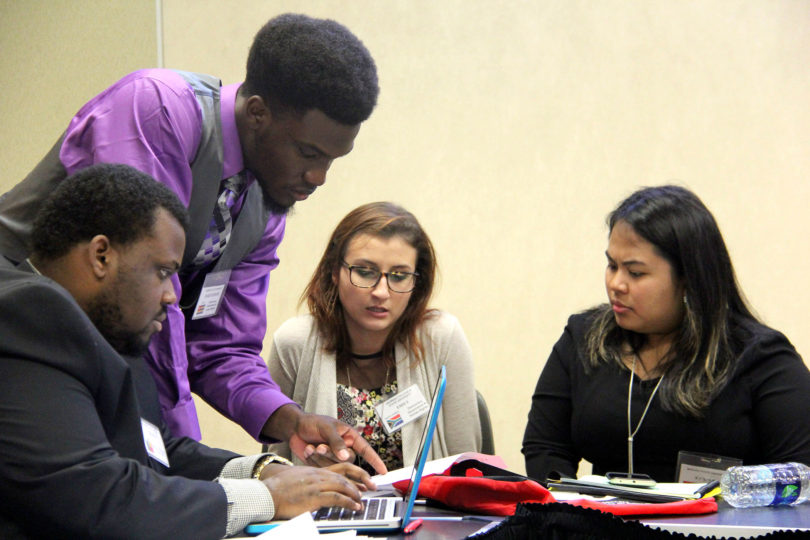 Members of the Committee on Democracy

“We’re so much more connected than I think we realize. One thing that I’ve learned from this model is that a problem on a continent halfway across the world affects me. There is something I can do to collaborate with individuals who are from there and figure out how to come together to solve these world issues,” she said. “It really is an all-around, holistic, beneficial experience for students.”

The 20th annual SEMAU, held Nov. 3-5 at the Georgia Center, brought together 118 students and 29 advisers from 11 schools—nine in the University System of Georgia—to participate in discussions about Boko Haram in West Africa and then draft and vote on resolutions in what co-director Jean Kidula called a “seminar on diplomacy.” Four teams from UGA consisting of 28 students participated in the event, representing Burkina Faso, Cabo Verde, Ethiopia and Niger. The event is modeled on the African Union, the international organization founded as the Organization of African Unity to promote cooperation among the independent nations of the continent, and is a precursor to the national Model African Union held in Washington, D.C., in February.

“There aren’t many things in the world more refreshing to experience than to be surrounded by like-minded people, and this is one of the reasons why I look so forward to being part of this incredible experience,” said Brown, a management information systems student who will graduate in May. During SEMAU, she represented Burkina Faso.

“I feel like I spend a lot of time learning about problems in the world in my international affairs and sociology classes, but what we don’t do is think of solutions for them. To have this intellectual community coming together thinking of the future can help improve the situation,” she said.

Committees spent a day and a half debating issues and writing resolutions. The committees then presented those resolutions to the Executive Council. The resolutions were then presented to Heads of State for a vote. For example, the Committee on Democracy, Governance and Human Rights proposed five resolutions—two passed, two failed and one did not receive a vote.

“Students learn the art of diplomacy and enhance their debating skills. These students research agenda topics outlined by the African Union. They research the position of their country of choice. They are then required to present that position, negotiate with delegates from other countries and find the best possible solution that works ideally for their country, for the continent and globally,” said Kidula, a professor of music in the Hugh Hodgson School of Music. “The African Union is modeled after the United Nations, and the protocol in the A.U. is similar to that of the U.N. So beyond just learning how diplomacy works in Africa, students are introduced to such functionings as conducted at forums like the U.N., NATO, etc.”

Michael Nwanze, a professor at Howard University and founder of the African Model Union, spoke to participants during the opening ceremony about how the event can broaden horizons.

“You learn to set aside your own nationality and assume the nationality of someone else in a country you may not have visited or that you may not have heard of before today and then to see the world through the eyes of that individual, ” he said. “The issue before you today is what are Africa’s solutions to African problems, and that is what you are here to do.”