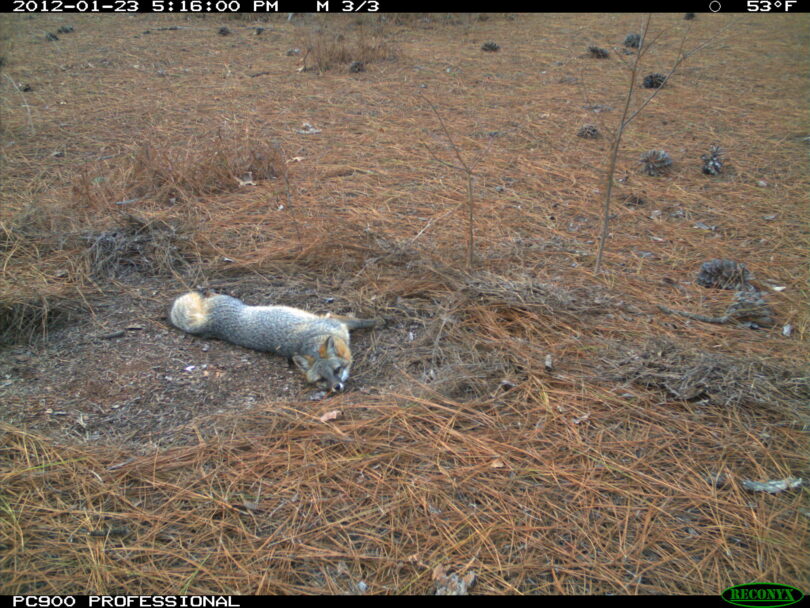 Gray fox populations seem to be declining in the Southeast, according to University of Georgia research. (Photo by Sarah Webster)

For generations, gray foxes have been part of the Southeastern landscape. They, along with red foxes, are among the carnivores that dine on a range of smaller animals, plants and berries.

But a new study published by researchers from the University of Georgia suggests competition for food from coyotes—a relative newcomer to the Southeast—may be putting pressure on foxes, particularly the gray fox.

“Gray fox populations, especially in the Southeast, seem to be declining, and have been for some decades,” said James Beasley, an associate professor in the UGA Warnell School of Forestry and Natural Resources whose doctoral student, Sarah Webster, wrote the study as part of her dissertation.

The study, published in the Journal of Mammology, was co-authored by Beasley as well as Warnell professor Michael Chamberlain and Warnell alumnus Joseph Hinton.

“Here on the Savannah River Site, there are excellent historical trapping records and gray foxes used to be really abundant,” said Beasley. “But now we don’t see them nearly as frequently. That’s prompted questions of why—why are we seeing the reduction in these numbers?”

At the Savannah River Ecology Lab in Aiken, South Carolina, where the study took place, Beasley said habitats have changed dramatically over the years, from agricultural areas preferred by red foxes to forested areas more conducive to tree-climbing gray foxes. Also, food is abundant for generalist carnivores such as coyotes and foxes, which will eat a variety of plants and animals, and coyotes are now abundant in this landscape.

In the Midwest, where foxes and coyotes have lived together for hundreds of years, the species have found a way to carve out food sources without overlapping too much—scientists call this “partitioning.” But coyotes have only been in the Southeast since the 1970s, giving them far less time to sort out their overlapping food preferences. 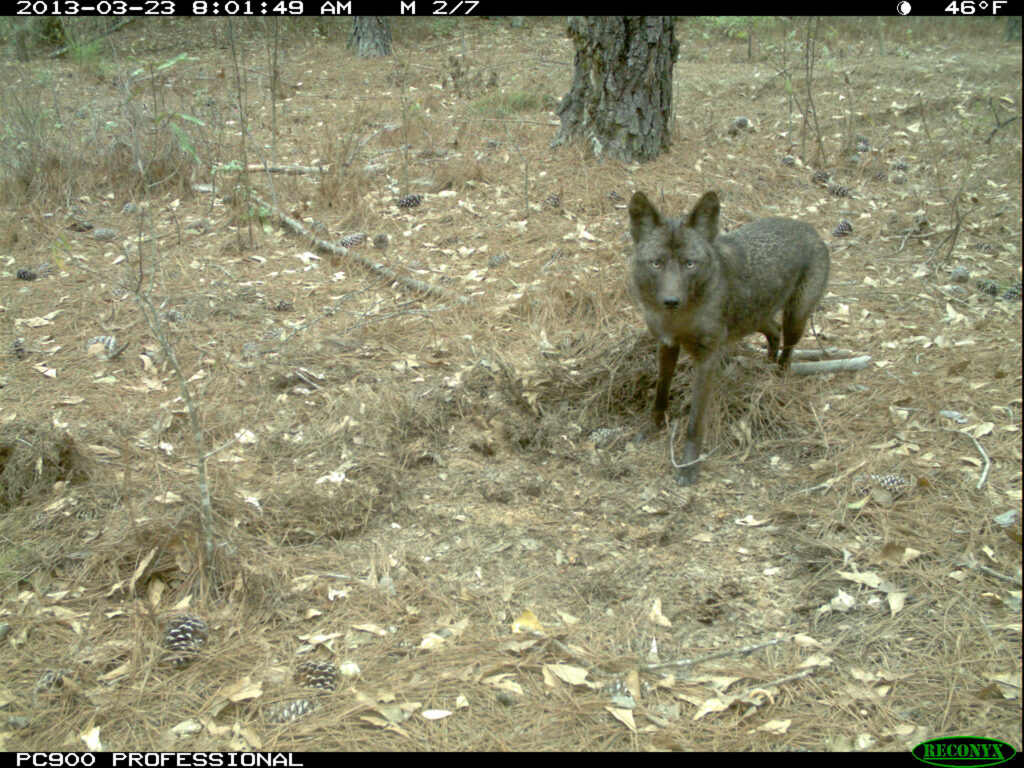 Competition from coyotes (pictured) may be contributing to declining numbers in gray fox populations. (Photo by Sarah Webster)

Still, Webster wanted more information about how coyotes’ and foxes’ food sources might differ between the regions. So, she used hair samples gathered from red and gray foxes and coyotes from both regions and from a variety of decades, including preserved samples from the Georgia Museum of Natural History. By measuring the amounts of carbon or nitrogen in the hair, Webster was able to assess the amount of overlap in diet between each species.

For example, a diet high in protein would manifest as a higher nitrogen content. Vegetation, such as fruits or grasses, translates as carbon in the hair samples. By noting the relative amounts of carbon and nitrogen content in hair samples, Webster was able to assemble a picture of how much diet overlap there was between each species in each region.

The results? There are significant regional differences in how coyotes and foxes dine.

“In the Midwest, we found there were significant differences in diet between species, whereas in the Southeast they overlapped significantly,” she said. In the Southeast, red and gray foxes had a large amount of overlap in their diets prior to the onset of coyotes, and that overlapping continued once coyotes arrived, according to more recent samples. “So, all three species are overlapping now in the Southeast.”

Beasley noted that the diet partitioning that takes place among these species in the Midwest is something that developed over hundreds of years, as coyotes and foxes learned to navigate the landscape around each other. There apparently hasn’t been enough time for that dynamic to play out in the Southeast.

“The question is, will that happen fast enough, before the gray fox populations continue to decline further?” he added. “It’s not exceptionally dire for the gray fox, but we now often find them closer to buildings or other marginalized areas. So, they may be finding other mechanisms to coexist with coyotes. But they do need forested areas.”

Habitat is one way, said Webster, that we can work to ensure future populations of gray foxes remain stable. When we understand the dynamics at play between the species, we can better plan for the future.

“We don’t have good evidence that we can effectively manage coyote populations on a large scale. They’re generalists, and they’re too flexible in their behavior and patterns. They will survive just fine,” said Webster. “So, a more effective approach likely would be to focus on the gray fox. Step one is to better understand how the gray fox population is doing by studying their population dynamics, and then going forward from there and trying to build effective management around the gray fox to ensure they continue to thrive in the Southeast.”