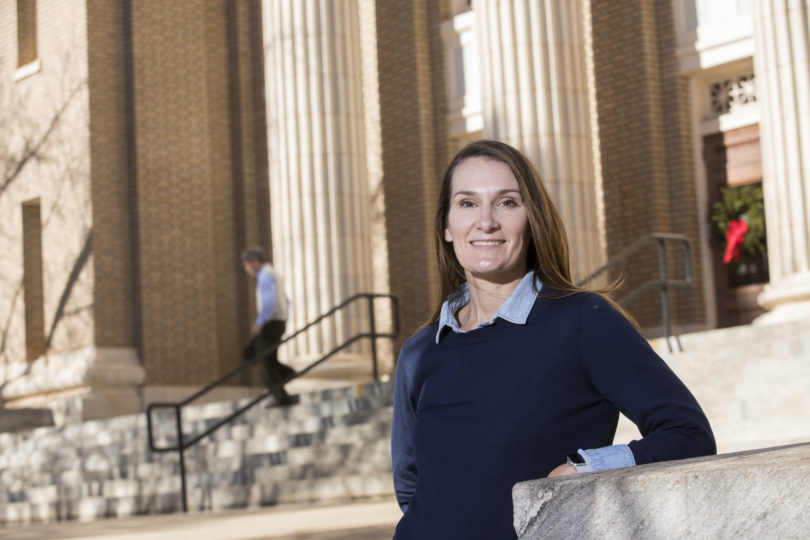 “For Halloween last year, I had an Honors class that on its own decided to dress up in constitutional-law themed costumes,” she said. 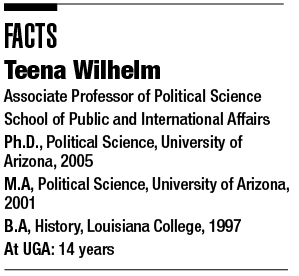 Another time a tornado warning interrupted a moot court simulation in her class, forcing her students out of the classroom and into the basement and hallways.

“They continued the moot court activity, not missing a beat,” Wilhelm said. “Students from other classes were watching and even videoing my students as they stood in the hallways, acting like Supreme Court justices and interacting with attorney oral arguments. They chose to do it; I didn’t make them. They just wanted to keep going. That was such a fulfilling day of teaching.”

While Wilhelm got her doctoral degree in Arizona, she grew up in the South and wanted to return here to raise her children. She liked Athens, and she was interested in working at UGA’s School of Public and International Affairs, which at that time was fairly new.

“SPIA is a special school. You don’t encounter schools that have international affairs, political science and public administration separated in a school all their own,” Wilhelm said. “That allows more resources and more faculty, and that was a big attraction.”

She also loved the unique culture of the university itself.

“UGA has this really nice balance between a school that knows how to have fun but is also very serious about its academics and service,” she said. “That’s not something you (always) find.”

Wilhelm’s research focuses on courts as institutions and examines how courts function in their political environments.

“We typically think of legal studies as related to court decisions, strictly speaking,” she said. “In my research, I try to understand law and policy as a function of politics, and the interplay of our political institutions.”

For this reason, she is interested in the effect of separation of powers on public policy. Her recent research examines whether attempts by state legislators to punish or “curb” state courts (when they disagree with court decisions) affects the ability of state judiciaries to remain independent in their decisions.

Wilhelm often does research alongside her colleague, Rich Vining. She believes that having a large political science department, including a sizeable subset of individuals who are interested in the same kinds of research, is another aspect that makes her job special.

“When you’re working with great, supportive colleagues, trying to think through tough questions, it doesn’t feel like work,” she said. “It feels like creativity, and it isn’t hard to be inspired.”