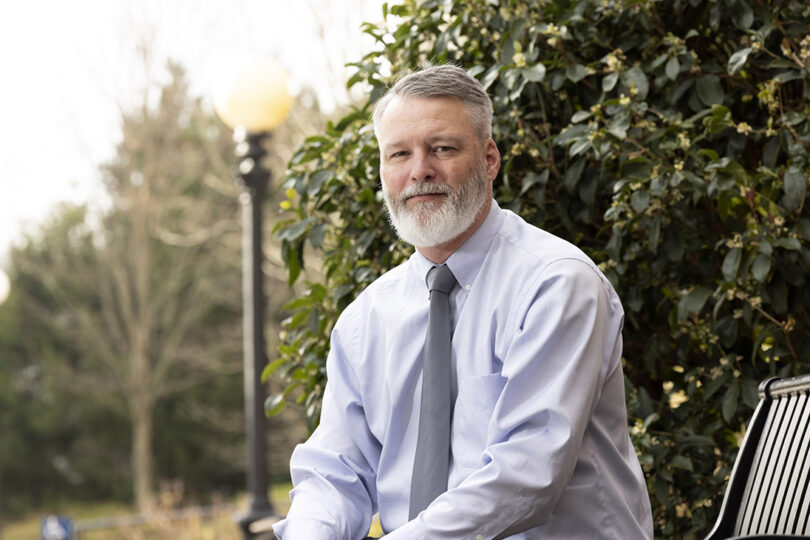 Paul Welch exudes enthusiasm for the University of Georgia

It might be hard to find a bigger Dawg fan than Paul Welch.

“We have a big group of friends that we meet for every home game,” said Welch. “In 2008, Georgia played at Arizona State, and we ate well and went to the Grand Canyon and made a trip out of it.”

As the director of student affairs in the School of Public and International Affairs, Welch is passionate about more than just college football on the University of Georgia campus.

Welch celebrates 20 years of working with SPIA this year. Over that time, he has helped thousands of students earn their degrees and has watched the program grow and change.

“We have a lot more students than we’ve ever had,” said Welch. “When I was hired, we had somewhere around 600 to 700, and we only had one major—political science. Now we’re somewhere between 1,600 and 1,700 students and three undergraduate programs.”

Welch works with students directly, much like the role of an advisor, to plan their coursework and path through SPIA. He also oversees other advisors, works with staff for graduation services, helps students find applied opportunities and internships for credit and handles academic questions that arise.

SPIA continues to offer new and exciting opportunities for their students.

“We just got approved for a minor in human rights. I think it’s going to be really exciting, and we have a lot of students who are interested in that, for sure,” said Welch. “I think a lot of it is our faculty listening to students and hearing what students are interested in—but also looking at themselves and seeing what their strengths are.”

Welch has a background in history and social science education, but after spending time in a classroom student teaching, he wasn’t fulfilled.

“I just kind of fell into being an advisor,” he said. “I thought, well, it would be kind of fun to talk to students individually about their pathways and what courses they want to take, because I was always kind of interested in those things.

“When I got here, all that opportunity that I missed out on as an undergraduate made me interested in working with students and maybe do things off the beaten path sometimes,” Welch said, impressed by the wide range of majors, languages and opportunities offered at UGA that weren’t available during his undergraduate experience at a smaller school. 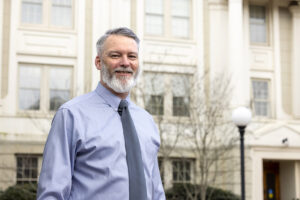 Welch’s work is essential for student success at the School of Public and International Affairs (Photo by Dorothy Kozlowski/UGA).

“I really like the work that I do now. I like working with students in that advising or counseling type of role,” Welch said about finding his strengths and continuing to offer opportunities to students 20 years later.

“It’s an easy thing to do at Georgia, because at least the students that I work with in our school are all really interesting people, and they’re usually open to ideas and doing fun stuff,” he said. “It’s kind of fun to do.”

Welch has seen many changes during the past two decades, but nothing as drastic as the COVID-19 pandemic. He was unable to have the interactions he was used to having with students every day, and he’s hopeful that he will soon be able to meet in person again.

“I’ve had a few face-to-face meetings with students that have reminded me of how much I feed off of that energy,” Welch said. “You can see when the lights go on.”

Welch spent time in Texas and Sweden before calling Athens home, but it is here that he has settled and built a family. During the fall, he packs his two sons up in the car to follow the Dawgs around the country. He says it’s a great way to see places he never would have traveled to before.

“We go to places that we don’t get to very often, and we’ll always try and make that trip. It’s more fun when we go a long way,” he said.

He also knows that his two sons will someday be Bulldogs themselves. “Where are they going to go? I mean, what college town could they possibly go to at this point that would not be a disappointment?” he said.

Without the bustle of the football season, Welch and his family spend the rest of the year traveling, particularly to the mountains, and enjoying some of Athens’ popular restaurants like home.made and Seabear Oyster Bar.