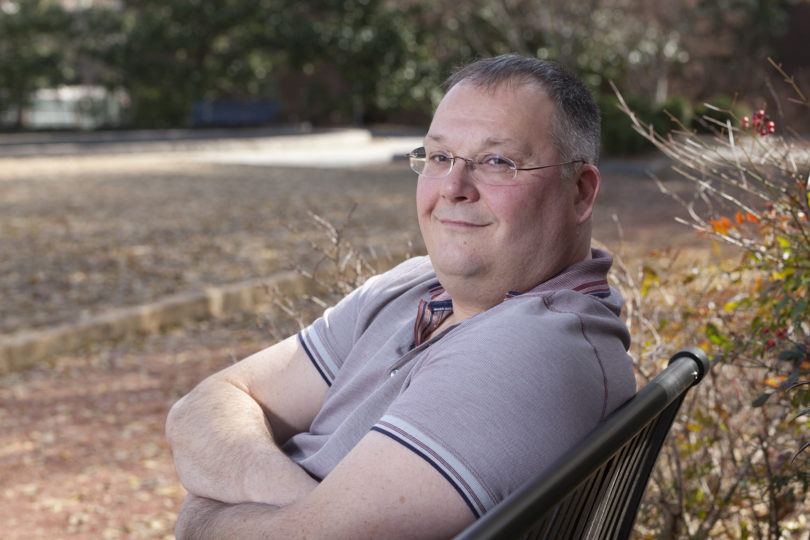 Cas Mudde, an assistant professor in the School of Public and International Affairs, doesn’t shy away from challenging conventional wisdom.

Whereas many scholars, political elites and the media decry what they describe as a rise of far-right groups in Europe, Mudde said these groups are not able to inflict that much harm.

“I make my career, by and large, arguing that my topic is not that relevant,” he said. “I can do that because virtually everyone says that it is.”

An overreaction to political dissent from an extremist group can threaten a democracy’s ideals if the country chooses to restrict the speech of nonviolent extremist groups or ban them altogether, Mudde said.

In his own words, the question Mudde poses in his research is this: “How can liberal democracies defend themselves against extremist challenges without undermining their own core values?”

Mudde has published two books on this subject, Populist Radical Right Parties in Europe in 2007 and The Ideology of the Extreme Right in 2000.

Growing up in the Netherlands, Mudde noticed that far-right groups garnered a lot of attention from the media and elite politicians even though those groups yielded little influence.

“What sparked my interest is the kind of visceral overreaction related to right-wing extremism in the Netherlands,” he said. “It always fascinated me why people would have, what in my opinion is, such a strong, irrational response.”

Conventional wisdom says that extremist political parties have gained influence in the midst of the European debt crisis.

However, at a European conference in Cologne, Germany, where Mudde spoke during spring break, he contended that there is no increased threat from right-wing extremism.

“(Far-right parties) are not profiting overall from the financial crisis, and I do not expect them to win that much in the upcoming European elections,” he said.

Perhaps not surprisingly, Mudde’s penchant for playing devil’s advocate comes through in the classroom as well, where he teaches courses in public opinion and participation, post-industrial democracies and qualitative methods in international affairs.

“If I have a teaching style, it is to question everything,” he said.

During class discussions, Mudde will ask students to question assumptions from the news they consume, their professors, their parents and even themselves.

As a European-born instructor, Mudde also can bring a fresh perspective to students, who only may be familiar with American political discourse.

“Often what I try to do is point out what is specifically American and what isn’t,” he said.

But Mudde doesn’t stop at questioning everyone else. At times in class discussion, he said he will offer viewpoints that oppose his own.