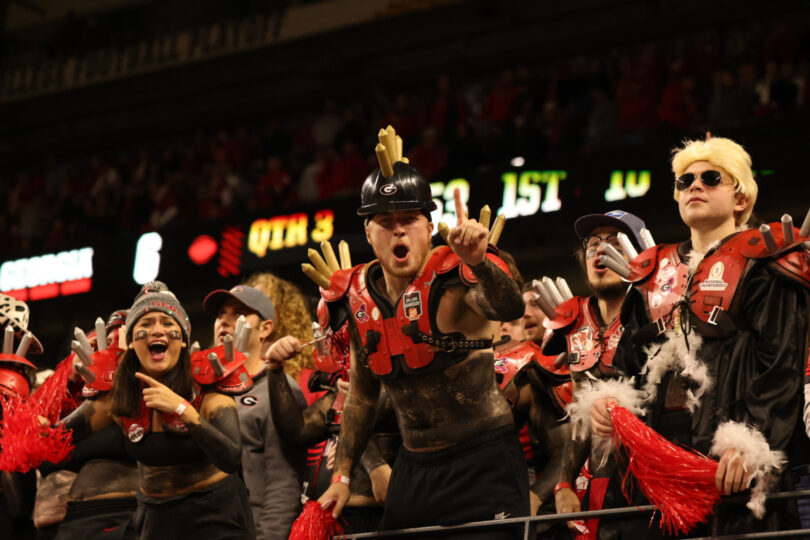 Noah White (center) cheers with the Spike Squad at the National Championship in Indianapolis. (Photo by Dorothy Kozlowski/UGA)

Back home in his Athens apartment a day after returning from Indianapolis for the University of Georgia’s historic, and oh-so-satisfying, win over Alabama, Spike Squad co-president Noah White was relieved his classes were online and, he hoped, wouldn’t require much talking. 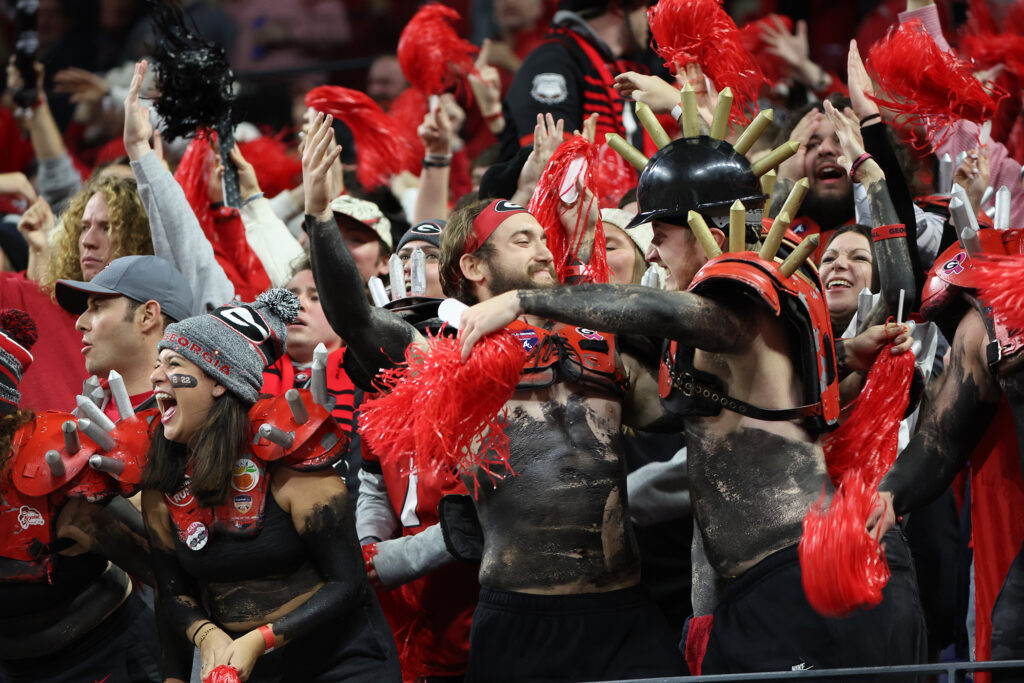 Brandon Nash, left, and Noah White cheer on the Dawgs together in Indianapolis. (Photo by Brett Szczepansk/UGA)

“My voice was gone by halftime. I yelled more than I’ve ever yelled at any Georgia game,” said White, who in his four years on the Spike Squad has done a lot of yelling on behalf of the Dawgs. The student group that’s “dedicated to being the loudest, craziest fans in Sanford Stadium!” does that by donning red and black face paint, spiked shoulder pads and very loudly occupying Section 109 on game days.

All games are a big deal to him, but this one felt different. Maybe it was because the stakes were so high – UGA hadn’t won the National Championship in 41 years – and White was ultra-focused on every play and trying to bring as much energy as he could. “I still feel like I’m dreaming,” said White who drove other members to and from Indianapolis in the space of a few days. “It was the craziest 72 hours of my life, but I’d do it all over again in a heartbeat.” 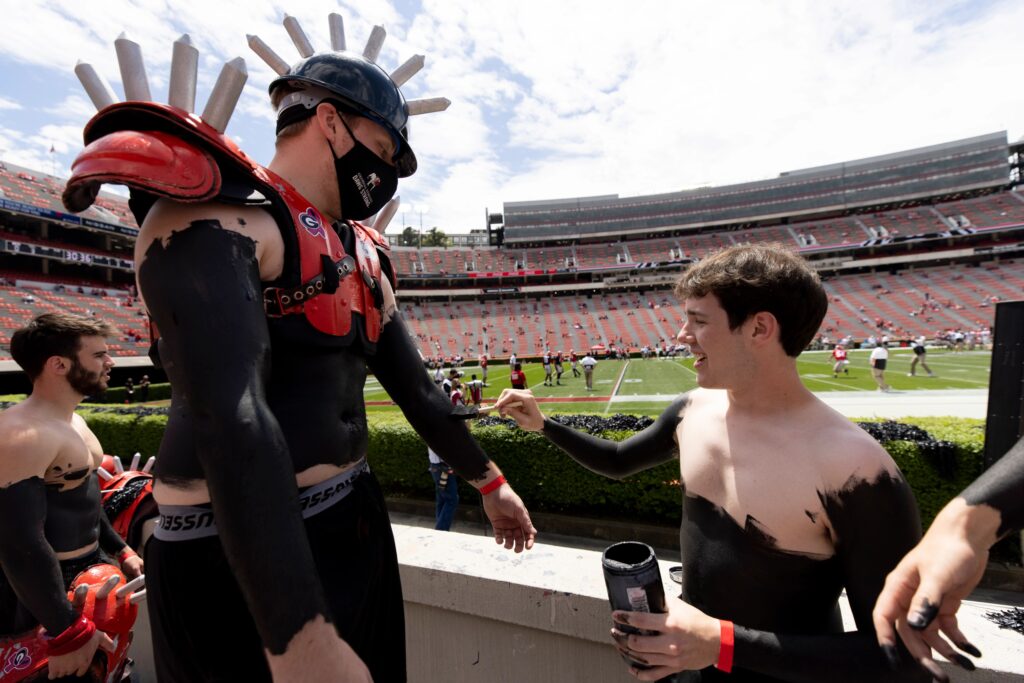 Noah White gets painted up by Garrett Cribbs of the Spike Squad before the start of the G-Day Football Game in April. (Photo by Andrew Davis Tucker/UGA)

The drama began before the game even started. It wasn’t certain that the Squad would be able make it to the game in the first place. They needed money for a hotel, travel expenses and tickets. But at the Orange Bowl, executive council member Caroline Bufano had an idea. She held up a sign saying “We need natty tickets” and the group’s Venmo tag.

The TV camera lingered on the sign for about five seconds and that was enough to get things started. “I was watching the game in Athens and our financial director called me and said ‘We’re receiving donations by the second.’” Thirty minutes after the game they’d already received $3,000 in donations. That kicked off a bit of a local media blitz and they ended up with $17,000, even more than the $15,000 they needed. A meeting is in the works to figure out how to distribute the rest of the money. “We plan to donate the leftover funds to Athens-area charities and give back,” said White. 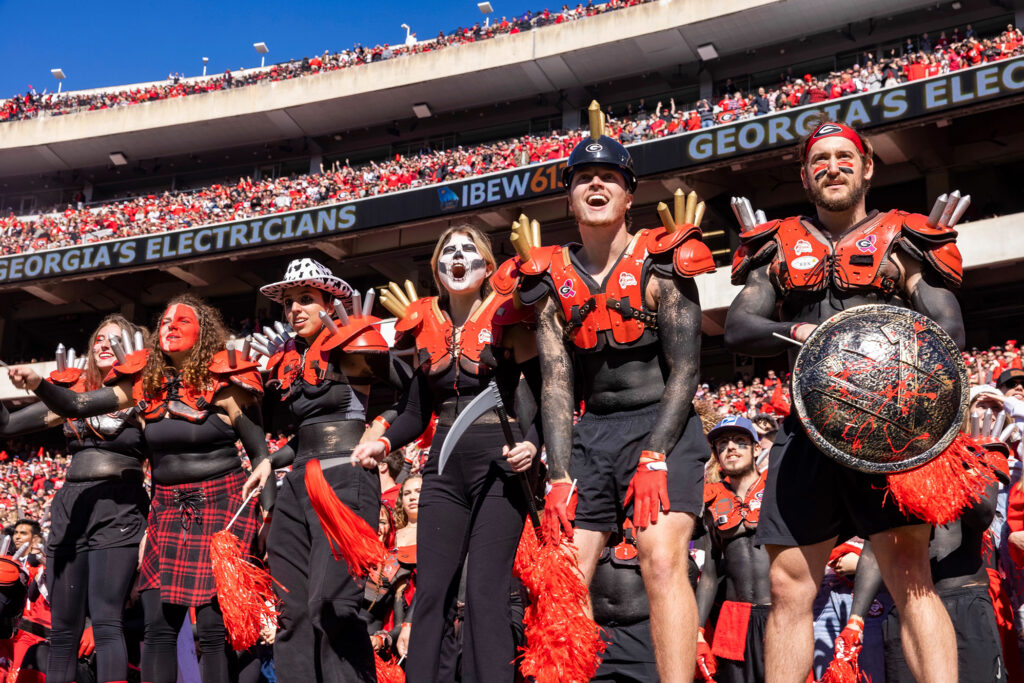 Members of the Spike Squad cheer in the stands. (Photo by Dorothy Kozlowski/UGA)

White will graduate with a degree in management information systems and already has a job lined up post-graduation as a supply chain consultant. He says he chose UGA “because the education here is one of the best in the nation.” But that was just part of it. “My parents raised me on Georgia football. When a good game was in town, we went,” said White, who grew up in Loganville. “I’m glad they did because I love this school and I love this team.” 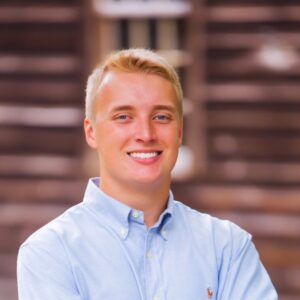 Noah White without the spikes and makeup. (Submitted photo)

White had been following the Spike Squad’s Twitter feed since high school and when he was a UGA freshman saw that they were having an information session for new members. “I thought to myself, as big of a Georgia fan as I am, I owe it to myself to at least try to be a part of this. I’m so glad I did; these past four years have been some of the best and most unique of my life.”

Now White is on the other side of the member selecting process. What does it take to be a great candidate? “A willingness to show up early and to be loud,” said White. “But also ‘Could I spend six hours in car with this person without them driving me crazy?’ We’re just looking for a group of friends to go to games with, be crazy, be loud and be the best Dawg fans we can be.”