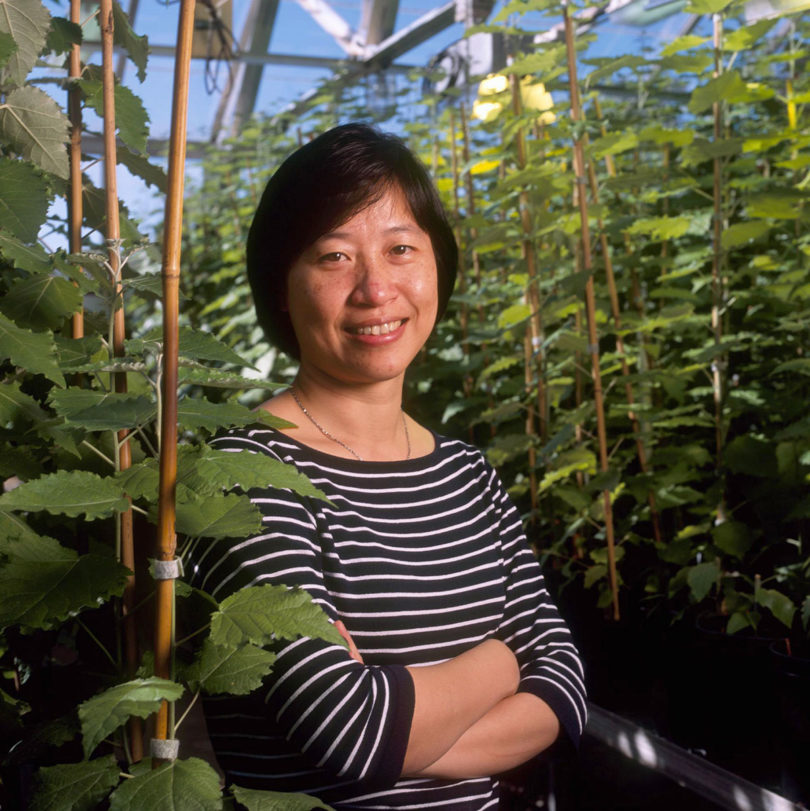 UGA scientists looking to understand the genetic mechanisms of plant defense and growth have found an inverse relationship between gene duplication and alternative splicing in plants. The finding has implications for diversity not only in plants, but in animals as well.

The research was published earlier this winter in Proceedings of the National Academy of Sciences.

“This inverse relationship previously has been reported in animals,” said Chung-Jui Tsai, senior author. “And in animal genes, when there’s a single copy, more often than not you see a higher degree of alternative splicing.”

Alternative splicing is the molecular process that allows a single gene to produce many gene products or proteins with potentially different functions. It is thought to be an efficient mechanism for the cell to rapidly create greater structural and functional diversity without evolving new genes.

Tsai is W.N. Haynes Professor and Georgia Research Alliance Eminent Scholar in the Warnell School of Forestry and Natural Resources, and professor of genetics in the Franklin College of Arts and Sciences.

Tsai’s team set out to investigate the role of a gene that encodes for the enzyme isochorismate synthase (ICS), which has two distinct functions: synthesis of vitamin K for photosynthesis and synthesis of salicylic acid, an aspirin-like compound found naturally in most plants that is important for its resistance to diseases.

In Arabidopsis, a tiny flowering annual plant widely used as a model for studying plants, salicylic acid is derived primarily from ICS. The investigators wanted to know the role of the ICS gene in the Populus tree species.

The team took their cues from Arabidopsis, which has two copies of the ICS gene, while Populus has only one.

When subjected to stresses, the Arabidopsis plant produced normal stress-fighting proteins, but from only one of the ICS duplicates. However, the Populus spontaneously produced a mixture of the normal and alternative forms of gene product in equal proportions, and it did not respond to stresses.

“When the correctly spliced Populus ICS gene was inserted, it worked as expected in Arabidopsis. This suggested that some of the signal recognition for splicing is not in the weed any more,” said Tsai. “When these species get attacked, it’s important for them to respond quickly and massively using a dedicated ICS gene.”

In contrast, woody perennial trees like Populus, which face environmental stress throughout their long lifetimes, have evolved other pathways to synthesize chemicals for “constitutive” defense—meaning these compounds are produced all the time—and the primary ICS function is photosynthesis.

But the major finding of the research—the relationship between gene copy number, gene sequence and how splicing may have contributed to gene evolution—is what she finds exciting.

“The finding that the Populus ICS gene cannot be properly spliced in Arabidopsis opens up new prospects in the quest for what makes a tree a tree,” she said.