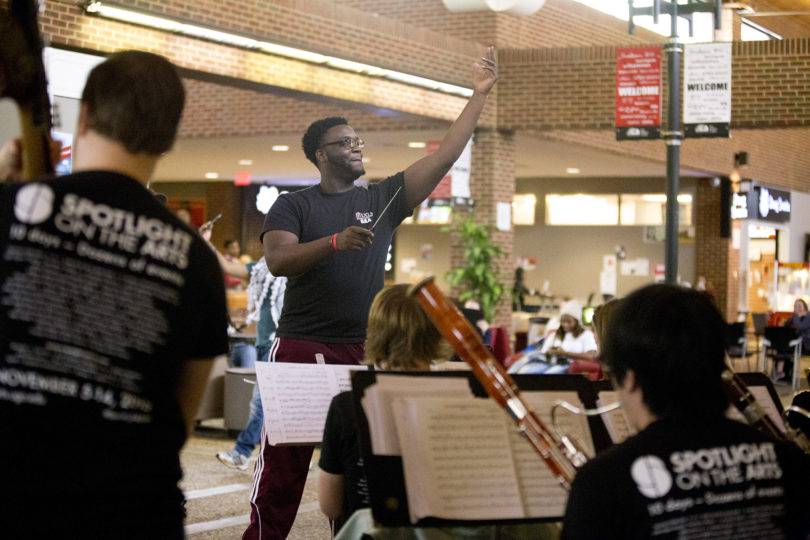 The festival was held Nov. 5-14 and reached 21,828 people through more than 100 events and exhibitions, including an opening celebration, concerts, plays, dance performances, book talks, art openings and more.

“The 2015 Spotlight on the Arts festival was a tremendous success thanks to the dedication of our Arts Council members and students from across campus,” said Pamela Whitten, senior vice president for academic affairs and provost. “I hope that this world-class festival has inspired people in the campus community and beyond to engage with our arts programs throughout the year.”

For the first time in the festival’s four-year history, the UGA Arts Council held a Spotlight on the Arts Opening Celebration, and the event drew more than 600 UGA students, faculty and staff members, donors and patrons to the Performing Arts Center Nov. 4.

Other highlights of the 2015 festival included performances from the University Theatre, UGA Opera Theatre and department of dance, a Shakespeare symposium, a popular open house at the Lamar Dodd School of Art and events surrounding the “Samurai: The Way of the Warrior” exhibition, which remains on display at the Georgia Museum of Art through Jan. 3. Special guests included the Atlanta Symphony Orchestra and the King’s Singers and several visiting writers, including those inducted into the Georgia Writers Hall of Fame.

“The fourth annual festival brought a bright spotlight on the arts during a very wet and cloudy November in Athens. The council is so appreciative of the tremendous talent showcased during the festival, and the community that came out to support and enjoy,” said Russ Mumper, chair of the UGA Arts Council and vice provost at UGA.

The University of Georgia convened the Arts Council in 2011 and held its first Spotlight on the Arts festival, which reached an audience of 14,788, in 2012.

Planning is underway for the 2016 Spotlight on the Arts festival, and information about arts events year-round can be found at www.arts.uga.edu or by following UGA Arts on Twitter, Instagram or Facebook.