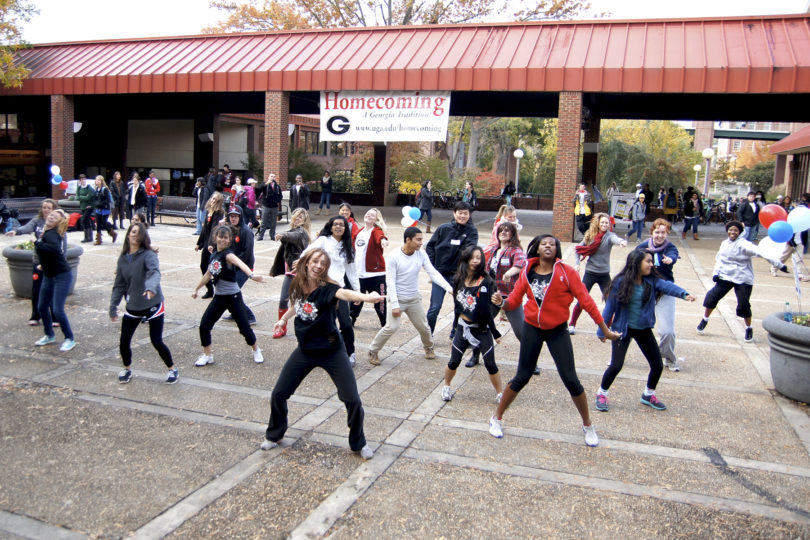 Events like the "dance mob" at the Tate Student Center last year will pop up around campus during the Spotlight on the Arts festival. Kristyl Tift

Last year it was Blue Man Group. This year, it’s Two Man Group as Brad Sherwood and Colin Mochrie from Whose Line Is It Anyway? help kick off the 2013 Spotlight on the Arts festival with an evening of improvisational comedy at the Classic Center Theatre in downtown Athens. The performance, arranged through a partnership between the Classic Center and UGA’s Performing Arts Center, is one of more than 60 events scheduled during the nine-day festival that runs Nov. 7-15.

The inaugural Spotlight festival, held last November, drew 15,000 people from the university and surrounding community to a range of arts-related events and activities planned by the UGA Arts Council at venues on and off campus. In addition, student groups organized impromptu performances at the Tate Center Plaza, in front of the Fine Arts Building and other campus locations. More Student Spotlight events are planned this year.

Here are some of the highlights of this year’s festival and the presenting units:

In addition to Two Man Group, the Performing Arts Center will present a signature event on Nov. 15 as veteran actor Hal Holbrook takes the stage in Hodgson Hall to perform his one-man show, “Mark Twain Tonight.” Holbrook, now in his 80s, has been portraying Twain for close to 50 years. The PAC also will present trumpeter Caleb Hudson, the newest member of the Canadian Brass, at Ramsey Hall on
Nov. 11. Tickets for Hudson’s concert can be purchased at pac.uga.edu; “Mark Twain Tonight” has sold out.

University Theatre will present Pride and Prejudice during the festival, plus matinee performances Nov. 10 and Nov. 17. Directed by theatre department faculty member George Contini, the production features a cast of undergraduate and graduate students. It will be presented in the Fine Arts Theatre, and tickets can be purchased through the Performing Arts Center box office.

The Hugh Hodgson School of Music will present a concert version of Bizet’s Carmen by the UGA Opera Theatre on Nov. 14 with an open dress rehearsal ($5 tickets) the previous evening. Other School of Music events include an afternoon concert by the UGA Wind Ensemble on Nov. 10 and an open house that day presented by the Community Music School with performances and an instrument petting zoo. Concert tickets can be purchased through the Performing Arts Center box office.

The Department of Dance will present its annual Young Choreographers Series Dance Concert during the first two evenings of the festival. Tickets can be purchased through the Performing Arts Center box office.

Free performances include a Dance Sampler on Nov. 8 and a sneak preview of an upcoming production by the CORE Contemporary and Aerial Dance Company on Nov. 14. The dance department also will host open classes in ballet, ballroom, folk dance and hip-hop.

The UGA Press, which is celebrating its 75th anniversary, will hold its popular “Dirty Book Sale” Nov. 7 and 8 at Tate Plaza featuring slightly damaged merchandise at discounted prices. The Press also will present an exhibition of the best graphic design work from university presses around the country in its offices on the third floor of the main library Nov. 11-15, and a film festival, featuring
movies based on books published by the Press, Nov. 12-15 in the auditorium of the special collections libraries.

The special collections libraries, home to the Georgia Writers Hall of Fame, will induct Georgia Poet Laureate Judson Mitcham into the Hall of Fame in a ceremony on Nov. 11, and will host a discussion with Mitcham on Nov. 10. A “Peabody Decades” event is planned Nov. 12, with a screening of the documentary Frances Albert Sinatra Does His Thing, which won a Peabody Award in 1968. The Peabody archives are housed in the special collections libraries.

The Georgia Review will host a free screening of That Evening Sun, a film based on a short story published in the Review and starring Holbrook, on Nov. 14, the day before Holbrook’s one-man show at the Performing Arts Center. The Review also will present a Georgia Poetry Circuit reading by Andrew Hudgins on Nov. 11 at Ciné, in downtown Athens. Hudgins will give a talk on “Poetry and Humor” earlier that day at the Miller Learning Center.

The Georgia Museum of Art will host Student Night at the Museum on Nov. 7, an extended family day on Nov. 10 and Museum Mix on Nov. 14, when the museum will be open from 8 p.m. till midnight. Visitors also will have the opportunity to participate in tours of the museum most afternoons during the festival, including one led by museum Director William Eiland on Nov. 13.

The Willson Center for Humanities and Arts has planned several events including a symposium with Willson Center Fellows engaged in arts-related research projects, a special exhibition in conjunction with ATHICA and the Georgia Virtual History Project, a Global Georgia Initiative lecture by author Karima Bennoune and a film festival focused on the work of Jim McKay in partnership with community organization Whatever It Takes. The four-day film fest begins on the last day of the Spotlight on the Arts festival, bringing home the point that UGA arts programming is year-round.