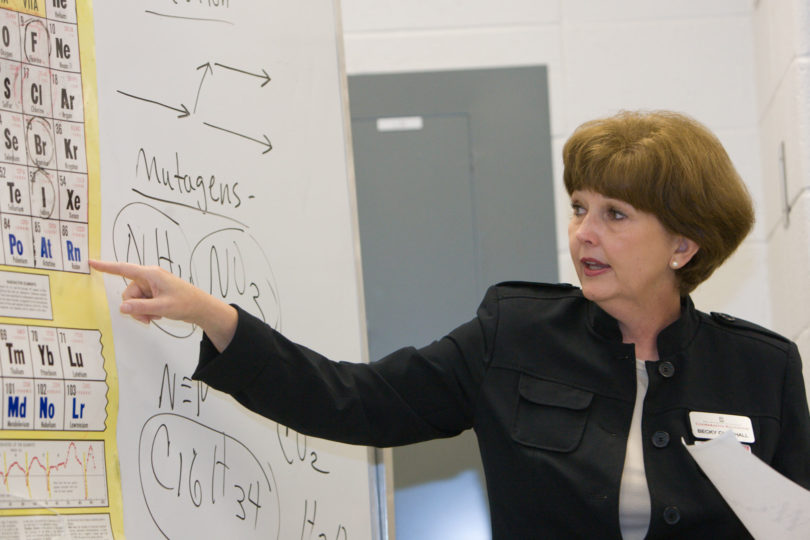 It’s hard to imagine a gas that’s invisible, odorless, tasteless, kills more people each year than drunk driving, and could be found in nearly any home in the U.S.

Radon gas, however, is a known cancer-causing agent and the second leading cause of lung cancer, according to the U.S. Environmental Protection Agency. In fact, the EPA estimates that radon kills 21,000 U.S. citizens annually.

Since 2003, the EPA has provided funding to states, including Georgia, to increase awareness of the risks of radon.

“During the 1980s researchers found dangerous radon levels inside American homes,” said Becky Chenhall, a radon educator with the College of Family and Consumer Sciences. “When more research was done in the 1990s, the EPA realized how important it was to spread the word to the public.”

Radon is a gas that’s produced from decaying uranium in the soil which then enters the home through foundations and well water. Regions with a great deal of granite, such as Georgia, are at a higher risk of radon. In fact, Georgia is ranked first among Southeastern states for radon-induced lung cancer with 822 deaths a year.

“Radon is truly a silent killer,” said Chenhall. “It’s so easy to ignore because you can’t see, smell or taste it. The only way to know the radon level in your home is to test for it.”

The EPA estimates that one in every 15 homes throughout the nation has a high radon level so high that immediate action should be taken. High radon levels include those that have a measure of radioactive emission of 4 picocuries per liter of air, which is the equivalent to smoking a half a pack of cigarettes per day.

The New York Times raised new questions about radon with an article focusing on the amount of radon emitted by some granite countertops. Although the article points out that most experts agree that the majority of the emissions from granite countertops is insignificant, it also quotes an EPA analyst as having heard from people around the country concerned about high readings.

“We know the vast majority of granites are safe, but there are some new exotic varieties coming in now that we’ve never seen before,” said Jim Hogan, president of the Marble Institute of America, in the article. “And we need to use sound science to evaluate them.”

“The New York Times article has helped to create greater radon awareness and an increased interest in testing,” Chenhall said. “But it is important to note that all homes should be tested for radon regardless of whether the home has granite countertops or not.”

In addition to working with the media to increase awareness of the silent carcinogen, radon educators also provide complimentary radon test kits.

Since 2003, the radon program has distributed 22,000 test kits and conducted more than 1,000 programs statewide.