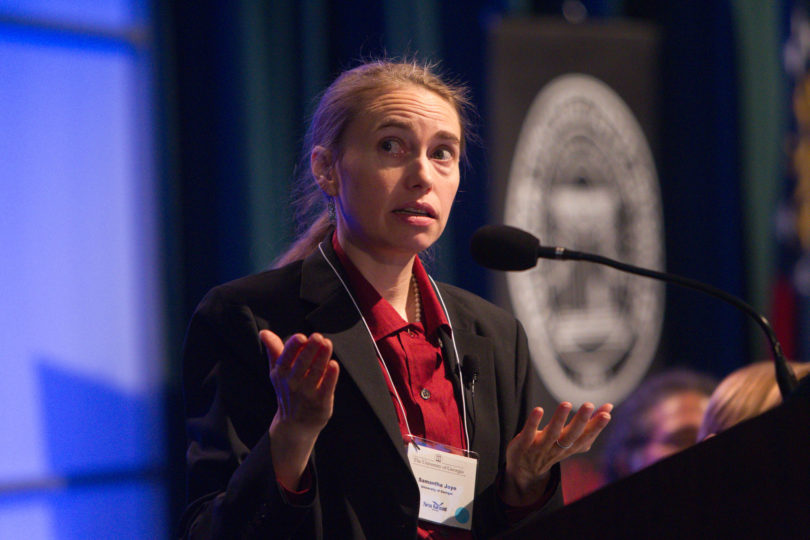 A new UGA study that is the first to examine comprehensively the magnitude of hydrocarbon gases released during the Deepwater Horizon Gulf of Mexico oil discharge has found that up to 500,000 tons of gaseous hydrocarbons were emitted into the deep ocean. The authors conclude that such a large gas discharge-which generated concentrations 75,000 times the norm-could result in small-scale zones of “extensive and persistent depletion of oxygen” as microbial processes degrade the gaseous hydrocarbons.

The Macondo Well blowout discharged not only liquid oil, but also hydrocarbon gases, such as methane and pentane, which were deposited in the water column. Gases are normally not quantified for oil spills, but the researchers note that in this instance, documenting the amount of hydrocarbon gases released by the blowout is critical to understanding the discharge’s true extent, the fate of the released hydrocarbons and potential impacts on the deep oceanic systems. The researchers explained that the 1,480-meter depth of the blowout (nearly one mile) is highly significant because deep sea processes (high pressure, low temperature) entrapped the released gaseous hydrocarbons in a deep (1,000-1,300m) layer of the water column. In the supplementary online materials, the researchers provide high-definition photographic evidence of the oil and ice-like gas hydrate flakes in the plume waters.

Joye said the methane and other gases likely will remain deep in the water column and be consumed by microbes in a process known as oxidation, which en masse can lead to low-oxygen waters.

“We’re not talking about extensive hypoxic areas offshore in the Gulf of Mexico,” Joye said. “But the microbial oxidation of the methane and other alkanes will remove oxygen from the system for quite a while because the time-scale for the replenishment of oxygen at that depth is many decades.”

Leifer added that some of the larger gaseous hydrocarbons documented, such as pentane, have significant health implications for humans and potentially for marine life.

The study concludes that separating the gas-induced oxygen depletion from that due to liquid hydrocarbons is difficult, absent further research, because all hydrocarbons contribute to oxygen depletion. Therefore, documenting the total mass of hydrocarbons discharged is critical for understanding the long-term implications for the Gulf’s microbial communities, food chain and overall system.

Joye’s team examined samples from 70 sites around the leaking wellhead during a research cruise aboard the R/V Walton Smith during late May and early June of 2010. They combined their data with estimates of the volume of oil released to arrive at a figure that allows scientists to quantify, for the first time, the gas discharge in terms of equivalent barrels of oil.

“This study highlights the value of knowledge gained from deep sea hydrate seepage research but also how poorly deep sea processes are understood,” Leifer said. “Deepwater Horizon underscored how ill-prepared the nation is to respond to future accidents. As a nation, we need to hear this deep sea Sputnik wake-up call.”