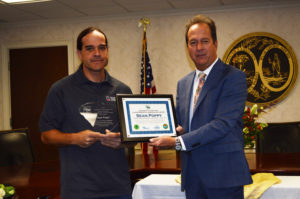 David Wilson, the acting director of the South Carolina Department of Health and Environmental Control, presented the award to Poppy at a recent ceremony in Columbia, South Carolina.

Established in 1992 by the South Carolina General Assembly, the award recognizes outstanding contributions made toward the protection, conservation and improvement of the state’s natural resources. An awards committee comprised of representatives from South Carolina’s natural resource agencies reviews nominations that are submitted from the public.

The committee considers innovation, leadership and accomplishments that influence positive changes that affect the natural environment.

Poppy conducts more than 300 presentations a year to educate the public about the natural ­ecosystems of South Carolina and Georgia, ­including wildlife. His animal-featured presentations reach nearly 40,000 individuals, including students and K-12 educators.