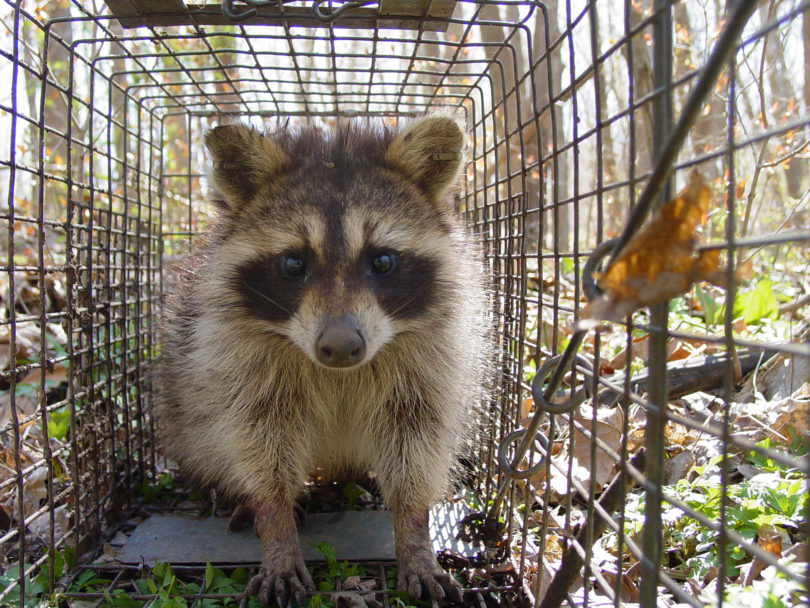 A captured raccoon peers out of the trap before being tested for the presence of placebo bait. (Credit: James C. Beasley)

Researchers at the University of Georgia Savannah River Ecology Laboratory are evaluating new methods to reduce the spread of rabies in wildlife populations.

Their project examines aerial baiting, a technique that involves distributing vaccine-filled bait at select points throughout the wilderness so that free-ranging wildlife gain immunity to rabies simply by eating food. Used in the eastern United States, this strategy has been successful in reducing the westward expansion of rabies in raccoons-the primary carrier of the disease in North America-but current practices don’t do enough to eliminate the disease.

Working to overcome this challenge, wildlife ecologists James Beasley and Olin Rhodes from UGA’s Savannah River Ecology Laboratory worked with researchers from the U.S. Department of Agriculture Animal Plant and Health Inspection Service and Purdue University to distribute placebo baits identical to those distributed in the aerial baiting program in the Upper Wabash River Basin in north-central Indiana.

“We know that wildlife don’t utilize the landscape randomly, but they selectively spend a disproportionate amount of their time in habitats containing preferred resources,” Beasley said. “So, our interest was in determining whether we could increase the number of raccoons that consume baits by placing a disproportionate number of baits in areas of preferred habitat.”

Researchers set up study sites within eight forested tracks for the study. Four cells were randomly chosen as treatment sites. Baits in these cells were distributed based on the observed movements of the raccoons. The four remaining control cells received uniform bait distribution.

The placebo baits were made of 150 milligrams of Rhodamine B, a harmless biomarker detected in whiskers or hair. It was placed in a fishmeal polymer matrix, and baits were distributed three days after an initial 10-day trapping period that was used to determine raccoon density.

Two weeks after the baits were distributed, the subjects were recaptured and samples were collected to determine bait uptake.

The study also addressed the issue of bait consumption by the non-targeted opossum, a non-carrier of the disease that exists in high density in the area. The effective range of the treated area was also evaluated by looking at bait consumption among individuals at varying distances from the targeted area.

Surprisingly, using models of observed movement to determine bait distribution did not increase the number of raccoons that consumed baits, which ranged from 12 to 39 percent among sites.

“This was most likely due to the fact that animal movements are already limited in highly fragmented agricultural landscapes where animals spend a great deal of their time in forested habitats or along forest-agriculture edges,” Beasley said. “The results do indicate that repeated bait distribution is necessary to achieve the level of immunity needed in the population to eradicate the disease.”

The opossum’s consumption of baits did reduce the availability of baits for raccoons, but their consumption rates were not high enough to explain the low bait consumption by raccoons. The study did reveal that bait uptake decreases with increased distance from the center of the bait zone, but the effective treated area can be three to 10 times larger than the actual treatment zone itself.