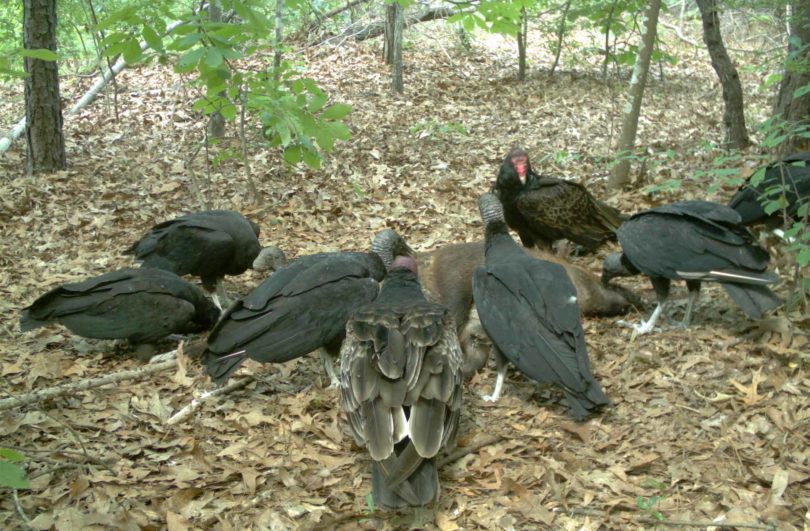 Both turkey and black vultures discover and partake in this feast. (Photo by James Beasley)

Two species of vulture—the turkey vulture and the black vulture—are able to coexist because their respective traits reduce the need for them to compete for nutritional resources, according to a study by University of Georgia researchers.

In North America, humans frequently see vultures on the side of the road and view them as wild scavengers. This vantage point doesn’t attribute the species with value. Yet, in other parts of the world like Asia –where population declines in vultures have given rise to diseases like rabies, the value of their role as scavengers in an ecosystem is quite clear. Vultures serve as garbage disposals, eliminating rotting flesh and reducing the spread of diseases.

A team of UGA researchers investigated how the turkey vulture and the black vulture—which have similar outward appearances—are able to coexist in a geographic region based on unique physical traits, skills and behavioral characteristics.

The team was led by Mike Byrne, a postdoctoral researcher at the Savannah River Ecology Laboratory at the time of the study. Rabbit and pig carcasses were placed as bait in open canopy and forested habitats. Byrne used an advanced GPS tracking system with high-resolution capability and remote cameras to examine the birds’ foraging behavior and movement patterns. 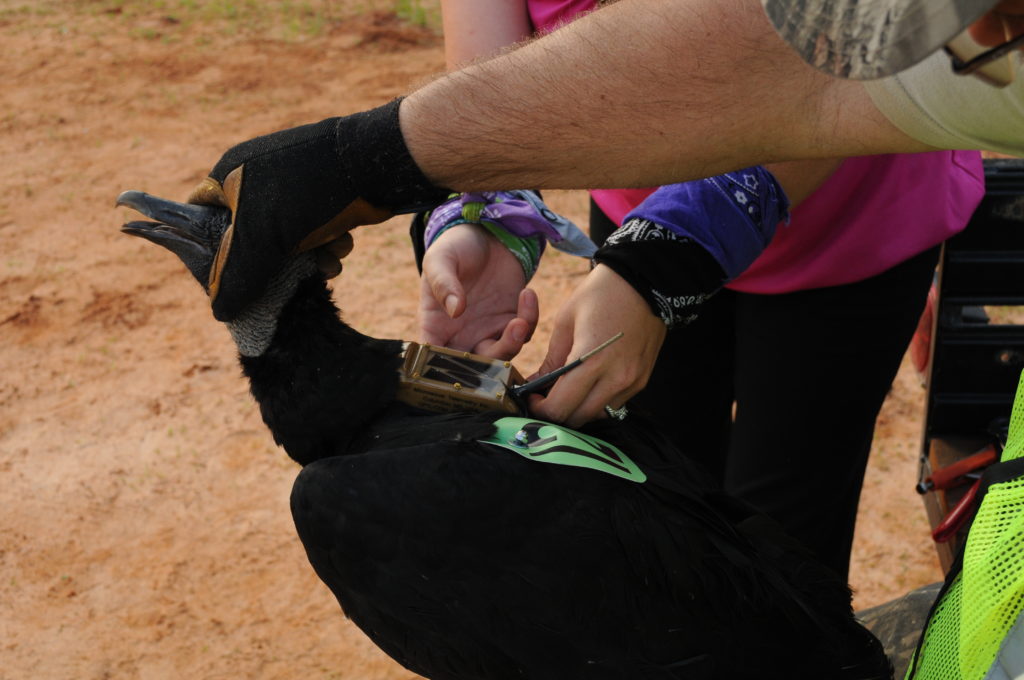 A black vulture is badged and fitted with the GPS tracking device before it takes flight. (Photo by James C. Beasley)

“Our results reveal how their physical and behavioral differences interact to reduce direct foraging competition between the species,” he said. “In particular, turkey vultures appear to use their superior sense of smell to locate smaller carcasses, as well as carcasses in forested areas that are difficult to see overhead. Black vultures appear more specialized at utilizing larger carrion.”

The turkey vulture’s body mass relative to its wing surface area is much lighter than a black vulture’s, according to Byrne, now an assistant professor of wildlife ecology at the University of Missouri. This physical trait allows them to soar more efficiently than black vultures, enabling them to cover a larger land mass and zoom in on small carcasses.

Their keen sense of smell, coupled with their flight skills, means that they’re the first to arrive at the buffet. The study revealed that turkey vultures arrived first at 94% of the carcasses.

But black vultures are adept at foraging larger carcasses, and they have other traits that allow them to successfully compete with turkey vultures, according to James Beasley, Byrne’s supervisor at the time of the study.

“Black vultures are much more social than turkey vultures,” said Beasley, associate professor at SREL and the Warnell School of Forestry and Natural Resources. “They are able to locate potential carrion by keying in on the movements of turkey vultures or through communication at communal roosts, and then they usurp larger carrion from turkey vultures through their more aggressive nature.”

Understanding how functionally similar vulture species are able to coexist can provide insight to European conservationists, who are using feeding programs to offset population declines, the researchers said.

The study, published in Ecosphere, is available at https://esajournals.onlinelibrary.wiley.com/doi/full/10.1002/ecs2.2548