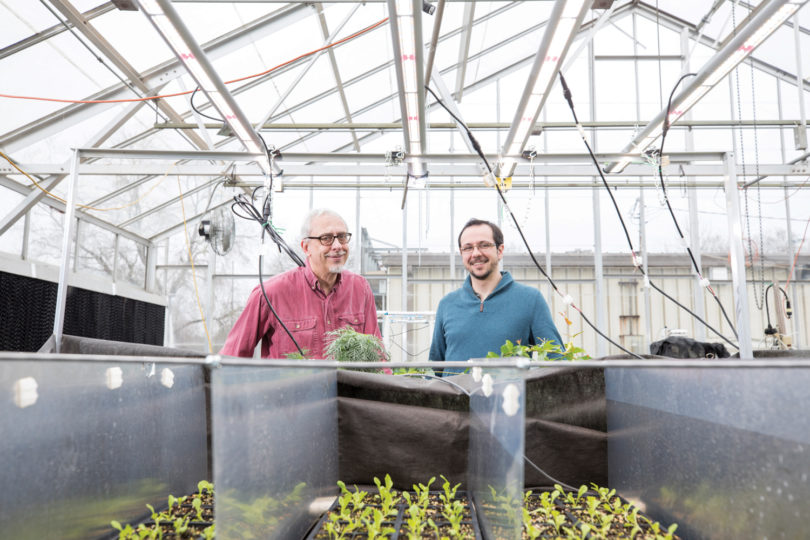 As UGA commits to the promise of innovation, one program is helping entrepreneurs get their startups off the ground.

The illuminated light bulb. It’s the symbol of a great idea come to life.

Erico Mattos’ big idea doesn’t reinvent that iconic bulb exactly but reimagines how it can be used.

Around the globe, greenhouses grow fruits and vegetables to provide a healthy food supply year-round. But as reliable as the sun is for providing light and energy for plants to grow, a rainy day or just a cloudy afternoon can slow a plant’s growth little by little. Those cloudy days add up and can affect how quickly a plant grows—including how deep its roots take hold—and how much it can produce. Some greenhouse growers use artificial lighting. But to shine a light on a plant that’s already getting ample sunlight is a waste of energy … and money.

After finishing his doctorate in bioengineering at the University of Georgia, Mattos PhD ’13 teamed up with Marc van Iersel, the Dooley Professor of Horticulture, to develop a lighting controller that can respond to sunlight and provide just enough supplemental light to keep plants happy. The lights dim under sunny conditions and get brighter under cloudy conditions.

“We provide the plants just the amount of light that they need,” says Mattos. “No more. No less.”

The idea has the potential to give the nearly $15 billion greenhouse farming industry a reliable, energy-saving process, which could ensure peak growth and profit margins and provide a more stable global food supply. Or at least that’s what Mattos suspected. Still, he wasn’t entirely sure if his lab work would translate into the real-world needs of greenhouse growers.

This could have been “a really cool idea and a bunch of academic papers,” van Iersel says. Instead, Mattos and van Iersel committed to bringing the idea to market by creating a startup. They named their company Candidus, Latin for “radiant.”

Finding a path to success

Mattos and van Iersel turned to a UGA program that’s helping faculty and students take their big ideas and entrepreneurial aspirations and pressure test them for the market. Innovation Corps, or I-Corps, was developed by the National Science Foundation to help scientists and engineers in the U.S. extend their academic research for economic and societal benefits. At UGA, teams go through a six-week accelerator program to identify market need and potential customers for their idea.

Across industries, the failure rate for startup companies is grim, 90% by some estimates. But data show 40% fail because customers don’t need—or at least think they don’t need—what’s being sold.

“You are going to fail if you have something that nobody cares about,” says Biggs. If he sounds blunt, it’s from years of experience in entrepreneurship and startups on both sides of the Atlantic Ocean. Before coming to Athens, the Oxford-educated Biggs worked in finance for several international banks and was part of a handful of animal breeding startups—including the team that brought the world’s first cloned sheep, Dolly, to life.

As rapidly as technology seems to be evolving, the process for bringing university ideas to consumers has gotten more complex, Biggs says. Years ago, big industry partners would shop around for the best ideas in academia and then buy the rights to take those ideas, potentially prototype them, and then determine if they were market ready. These days, companies are less likely to invest in ideas unless they are sure things. Through its Innovation District Initiative, UGA is stepping up to help faculty and students develop their research to have the greatest impact on society.

The success in this effort speaks for itsecan I recycle this?

lf. Last year, UGA ranked first among 193 U.S. institutions for the number of commercial products reaching the market, according to a survey released by the nonprofit AUTM, which tracks technology transfer. In the same survey, UGA ranked fourth in the number of new intellectual property licenses executed to industry. So far, the bulk of that success comes from existing companies licensing UGA technology, but the university is strengthening its efforts to support startup companies based on university research.

I-Corps is a key first step for faculty entrepreneurs, and it’s the perfect Startup 101 course for academics.

Hour after hour, year after year, scientists painstakingly commit to their research and their ideas. For Mattos, it was time spent understanding how plants respond and grow in light and how to measure and monitor that response.

“When you are really passionate about something, you think your work, your technology, will save the world,” says Mattos. “That doesn’t mean the market is ready for it yet.”

Since 2017, 62 groups have gone through the I-Corps program. The ideas are diverse, ranging from using drone technology to assess animal health to using recycled plastics for modular homes, from a vaccine additive to reduce side effects to a better delivery system for probiotics. One graduate of the program is the all-female team of engineers that launched Can I Recycle This?

Co-founder Katherine Shayne BSEE ’16, MSEE ’18 developed an artificial intelligence-based system to educate consumers on what can or cannot be recycled in their area and how to do it properly. Shayne and the rest of the team were able to determine a potential path to create a sustainable company. They’re currently developing their software and working with potential municipal and industry partners to help consumers understand what’s recyclable.

“Without this program, you would have research and innovation that just sits there and isn’t used,” says Shayne. “Without the lessons we learned in I-Corps, I don’t think it would be what it is today as a company. We knew we had a support system.” 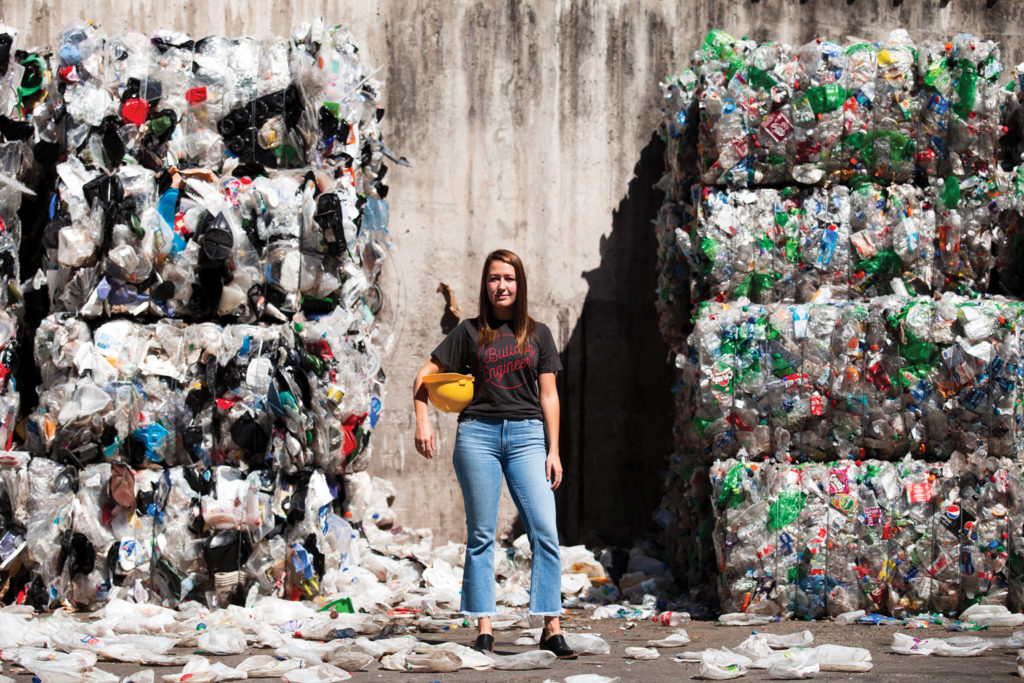 Katherine Shayne co-founded and developed an artificial intelligence-based system to educate consumers on what can or cannot be recycled in their area and how to do it properly. (Photo by Edwin Hammond)

For Mattos, I-Corps was an opportunity to get out of his labs and connect with greenhouse growers so he could figure out if the adaptive lighting system would be useful to them. He found that growers were intrigued by the system but seemed to be drawn to different benefits. Some wanted the accelerated crop cycle it could provide, others wanted a predictable crop schedule, and still others wanted to reduce their energy consumption.

For Mattos, those conversations emphasized that his growers were diverse, and the more people he could learn from, the better. That’s how he was able to construct a revenue model and business plan.

Like a researcher devising the perfect conditions for an experiment, he kept pitching new ideas to growers and getting their input.

“It was the exercise of making a hypothesis, getting feedback, validating, and then repeating,” says Mattos. “I-Corps didn’t provide the answers. It helped us ask the right questions.”

Since then, Candidus has won funding from the Georgia Research Alliance and the U.S. Department of Agriculture for project development and commercialization. They’ve been testing their system with a handful of Georgia growers and are poised to offer their services to a broader market.

There’s still so much work to be done before Candidus can reach its potential. But Mattos believes he’s developing the business sense to match his technical expertise.

And who knows? Maybe his idea can change the world. 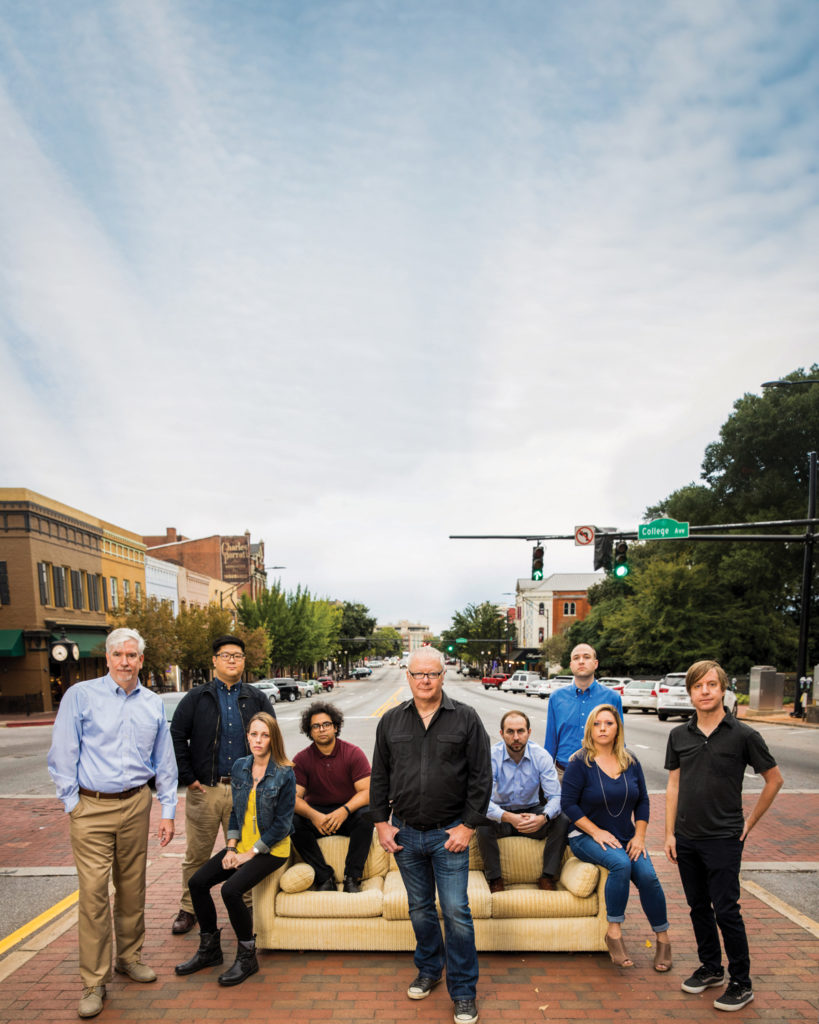 Ian Biggs (center) and the Startup Program team at the intersection of campus and downtown Athens. (Photo by Dorothy Kozlowski/UGA)

I-Corps is just one of the first steps offered in UGA’s Startup Program, part of the university’s Innovation Gateway. The Startup Program helps UGA faculty and students launch and grow startup companies. These startups typically are built around intellectual property arising from UGA research and student project.

Groups that graduate from I-Corps with a clear market demand can seek additional funding and incorporate into companies. With the assistance from Innovation Gateway staff, UGA startups can use the university’s incubation space and other resources to cultivate them into functioning company.