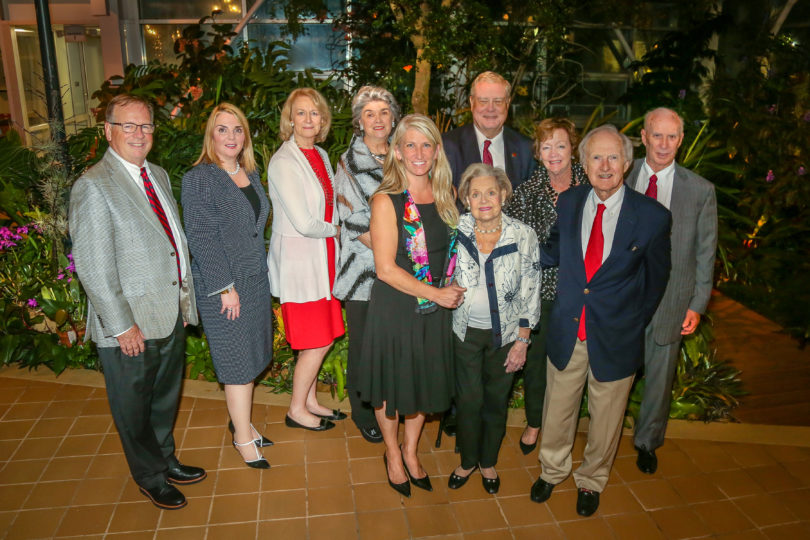 Six longtime supporters of the State Botanical Garden of Georgia were honored recently during the biennial “Giving Tree” celebration that recognizes patrons who have given their time and money to the garden.

“We are fortunate to have a strong group of supporters who are so generous with their time and financial resources,” said Jennifer Cruse-Sanders, director of the State Botanical Garden of Georgia, a unit of University of Georgia Public Service and Outreach. “They recognize the importance of the garden and its contribution to education, conservation and research for the university and across the state.”

James B. Miller Jr., a charter member of the State Botanical Garden board of advisers, was the 2018 Distinguished Honoree, the garden’s highest honor bestowed on donors. Miller, who helped establish the board, has shown generosity to the garden personally and through Fidelity Southern Corporation, where he serves as chairman and CEO. Miller lives in Atlanta.

In addition to supporting the International Garden, Heritage Garden, Flower Garden and Alice H. Richards Children’s Garden and the annual balls, Miller was one of the first to contribute to the accessibility initiative at the garden. He co-chaired the 1989 Gardens of the World Ball with former UGA Vice President for Services S. Eugene Younts, who recently passed away.

Three board members received the 2018 Southern Magnolia Award, which honors philanthropic contributions of more than $100,000 and continued service to the garden. The 2018 honorees are Martha Brumley Ellis, Brenda Magill and Sissie Morris.

Ellis has been on the garden’s board of advisers for 17 years, supporting the Gardens of the World Ball each of those years in addition to the Flower Garden and children’s garden campaigns. Ellis lives in in Sea Island, Georgia, and Highlands, North Carolina.

Magill has served on the board for 21 years, championing Orchid Madness, the Gardens of the World Balls, the children’s garden campaign, the Heritage Garden campaign as well as the horticulture and conservation funds. She co-chaired the 2011 ball with Betsy Ellison. Magill lives in Athens.

Kathy and Neely Young received the Garden of Georgia medal, the highest award for service and support. Kathy Young previously served as chair of the board and spearheaded the development committee of the garden’s most recent campaign, the Alice H. Richards Children’s Garden. In addition, Kathy Young co-chaired the 2009 Gardens of the World Ball with Betty Sponcler, celebrating the ball’s 25th anniversary with a book chronicling its history. Kathy Young and her husband Neely Young have also demonstrated support of the garden through the voice of Georgia Trend, a statewide business publication they owned and managed until 2017. The Youngs live in Marietta, Georgia, and Cashiers, North Carolina.