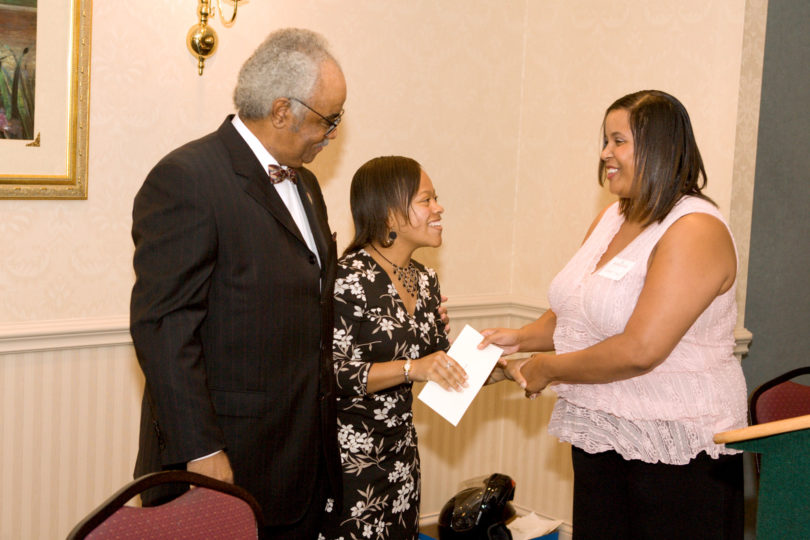 “Those of us who have had an opportunity to make money also have an obligation to help those who need it,” said Brooks, who is president of the Georgia Association of Black Elected ­Officials.

This year’s recipient of the ­undergraduate scholarship was Nekeisha Lynne Randall. A junior from Fort Valley, Randall is majoring in agricultural communications with a concentration in public relations.

Bridgétte B. ­Johnson-Israel of Savannah received the graduate scholarship. A third-year student in the College of Pharmacy, Johnson-Israel is working towards a Ph.D. in pharmaceutical and biomedical sciences. She earned a bachelor’s degree in chemistry from Georgia Southern University and a master’s degree in chemistry from North Carolina A&T University.

“This contribution you make is so important, not only to the people who receive checks that allow them to continue their education, but because it’s an indication that those who have been successful, who have been educated, who have a conscience, will not let the work these students do go unnoticed,” Brooks said.

“African Americans are about 30 percent of the state’s population, but only 6 percent of elected officials. . . . What about jails? There it’s about 70 percent. Your contributions can help change these numbers,” he said.

Brooks asked members of the audience to encourage local black business owners to support efforts like the luncheon, which he said could contribute to the reduction of children born to single mothers, the illiteracy rate and poverty.

“I want to make sure you know that this is being felt beyond the campus and beyond Athens-Clarke County,” he said. “You’re doing missionary work. That’s what BFSO does; it helps children.”

The $30-a-plate luncheon was the fourth in the organization’s history. The luncheon is typically held in the summer and awards scholarships to one undergraduate and one graduate student.

“This was established to publicly acknowledge the recipients and generate money for the fund, which is an annual event now,” said Deborah Strong, a clinical assistant professor in the College of Pharmacy and chair of BFSO’s scholarship committee.

Brooks has been an activist for civil and human rights since age 15, when he volunteered with the Southern Christian Leadership Conference. He became a full-time staffer of the organization in 1967 under the leadership of the Rev. Martin Luther King Jr.

Brooks is an active member of the Georgia Legislative Black Caucus, co-founder of the Coalition for the People’s Agenda and serves in many other organizations.