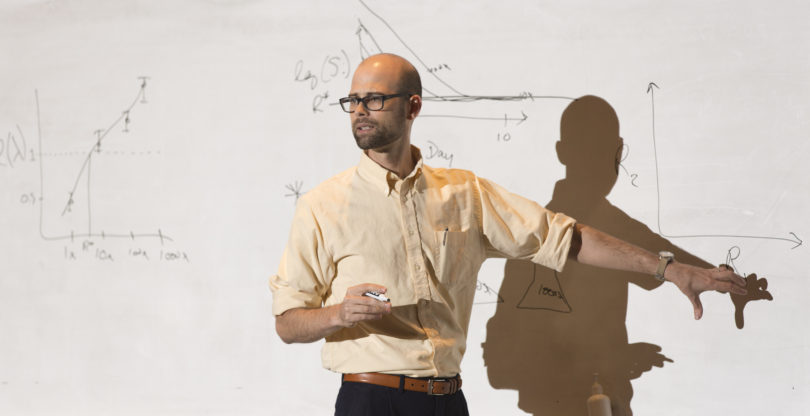 John Drake in the Ecology Auditorium at UGA. (Photo by Andrew Davis Tucker)

Several University of Georgia researchers teamed up to create a statistical method that may allow public health and infectious disease forecasters to better predict disease reemergence, especially for preventable childhood infections such as measles and pertussis.

As described in the journal PLOS Computational Biology, their five-year project resulted in a model that shows how subtle changes in the stream of reported cases of a disease may be predictive of both an approaching epidemic and of the final success of a disease eradication campaign.

“We hope that in the near future, we will be available to monitor and track warning signals for emerging diseases identified by this model,” said John Drake, Distinguished Research Professor of Ecology and director for the Center for the Ecology of Infectious Diseases who researches the dynamics of biological epidemics. His current projects include studies of Ebola virus in West Africa and Middle East respiratory syndrome-related coronavirus in the horn of Africa.

In recent years, the reemergence of measles, mumps, polio, whooping cough and other vaccine-preventable diseases has sparked a refocus on emergency preparedness.

“Research has been done in ecology and climate science about tipping points in climate change,” he said. “We realized this is mathematically similar to disease dynamics.”

Drake and colleagues focused on “critical slowing down,” or the loss of stability that occurs in a system as a tipping point is reached. This slowing down can result from pathogen evolution, changes in contact rates of infected individuals, and declines in vaccination. All these changes may affect the spread of a disease, but they often take place gradually and without much consequence until a tipping point is crossed.

Most data analysis methods are designed to characterize disease spread after the tipping point has already been crossed.

“We saw a need to improve the ways of measuring how well-controlled a disease is, which can be difficult to do in a very complex system, especially when we observe a small fraction of the true number of cases that occur,” said Eamon O’Dea, a postdoctoral researcher in Drake’s laboratory who focuses on disease ecology.

The research team found that their predictions were consistent with well-known findings of British epidemiologists Roy Anderson and Robert May, who compared the duration of epidemic cycles in measles, rubella, mumps, smallpox, chickenpox, scarlet fever, diphtheria and pertussis from the 1880s to 1980s. For instance, Anderson and May found that measles in England and Wales slowed down after extensive immunization in 1968. Similarly, the model shows that infectious diseases slow as an immunization threshold is approached. Slight variations in infection levels could be useful early warning signals for disease reemergence that results from a decline in vaccine uptake, they wrote.

“Our goal is to validate this on smaller scales so states and cities can potentially predict disease, which is practical in terms of how to make decisions about vaccines,” O’Dea said. “This could be particularly useful in countries where measles is still a high cause of mortality.”

To illustrate how the infectious disease model behaves, the team created a visualization that looks like a series of bowls with balls rolling in them. In the model, vaccine coverage affects the shallowness of the bowl and the speed of the ball rolling in it.

“Very often, the conceptual side of science is not emphasized as much as it should be, and we were pleased to find the right visuals to help others understand the science,” said Eric Marty, an ecology researcher who specializes in data visualization.

As part of Project AERO, which stands for Anticipating Emerging and Re-emerging Outbreaks, Drake and colleagues are creating interactive tools based on critical slowing down for researchers and policymakers to use in the field and guide decisions. For instance, the team is developing an interactive dashboard that will help non-scientists plot and analyze data to understand the current trends for a certain infectious disease. They’re presenting a prototype to fellow researchers now and anticipating a public release within the next year.

“If a computer model of a particular disease was sufficiently detailed and accurate, it would be possible to predict the course of an outbreak using simulation,” Marty said. “But if you don’t have a good model, as is often the case, then the statistics of critical slowing down might still give us early warning of an outbreak.”