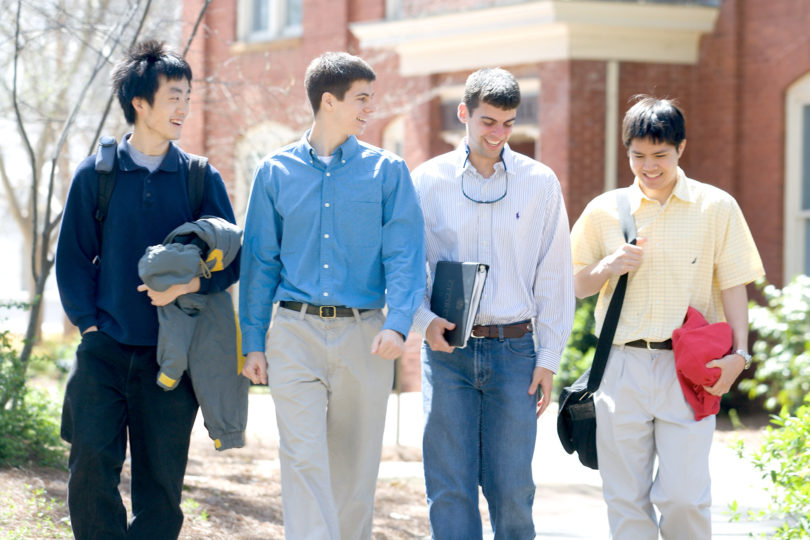 Four UGA Honors students have been awarded the 2006-2007 Barry M. Goldwater Scholarship, one of the most prestigious scholarships in the country for undergraduates in mathematics, science and engineering.

UGA is among a handful of institutions nationally with the maximum number of Goldwater Scholars allowed per school this year. A total of 30 UGA students have received the award since 1995.

UGA’s Goldwater Scholars are Yunjiang “John” Jiang, a sophomore majoring in mathematics; Phillip B. “Ben” Ham and Douglas M. Jackson, juniors majoring in chemistry; and Teerawit “Tim” Supakorndej, a junior majoring in genetics and biology. They are among 323 sophomores and juniors from across the country selected for the scholarship, which encourages academically outstanding undergraduates to pursue careers in math- and science-related fields. The one- and two-year scholarships cover tuition and other costs up to $7,500 per year.

“I’m very proud that UGA students have again earned this notable honor,” says President Michael F. Adams. “The stellar record of Goldwater Scholars at this institution is a tribute both to the caliber of our students and to the quality of undergraduate education at UGA, particularly in our Honors Program.”

David Williams, director of UGA’s Honors Program, notes that this is the fourth time in recent years that all UGA nominees were successful in winning the scholarship.

“This underscores that our students, and those faculty members who mentor them, are among the very best in the country,” he says.

Jiang has been accepted into a 10-month “master class” in symplectic geometry and physics next year, a highly competitive program in Utrecht, Netherlands. In his freshman year, he participated in two consecutive National Science Foundation Research Experience for Undergraduate programs, one at UGA and one at Central Michigan University. He also has been a math and science tutor for UGA’s Division of Academic Enhancement.

Both Jackson and Ham are pursuing combined bachelor’s/master’s degrees in chemistry. Jackson is a Foundation Fellow and has participated in UGA’s Center for Undergraduate Research Opportunities as a summer fellow. He also is a student representative on the CURO advisory board. He has been engaged in undergraduate research since his first semester with Nigel Adams in chemistry, working on the graduate level. He recently presented his research at the NASA Workshop on Laboratory Astrophysics and also will present at the national meeting of the American Chemical Society.

Ham has worked with ­Michael Duncan’s research group since fall 2004 and has learned in a short time the required advanced instrumentation and principles of chemistry not normally ­introduced until senior year or graduate school. Along with presenting his research at conferences, Ham is president of UGA’s chapter of the Student Affiliates of the American Chemical Society and has studied abroad in Tanzania and Peru.

Supakorndej is a Bernard Ramsey Honors Scholar. His work with Michael Terns in biochemistry and molecular biology earned him a CURO summer fellowship. He also has participated in a summer research program at Memorial Sloan-Kettering Cancer Center in New York. His volunteer commitments include Habitat for Humanity and Recording for the Blind and Dyslexic.

“These students are unique in their own ways, performing at the graduate level at UGA,” says Karl Espelie, faculty chair of the UGA selection committee and professor of entomology and biological sciences. “They will undoubtedly excel in their respective disciplines in graduate school, and I’m very pleased that the Goldwater Scholarship recognizes their incredible academic achievements.”