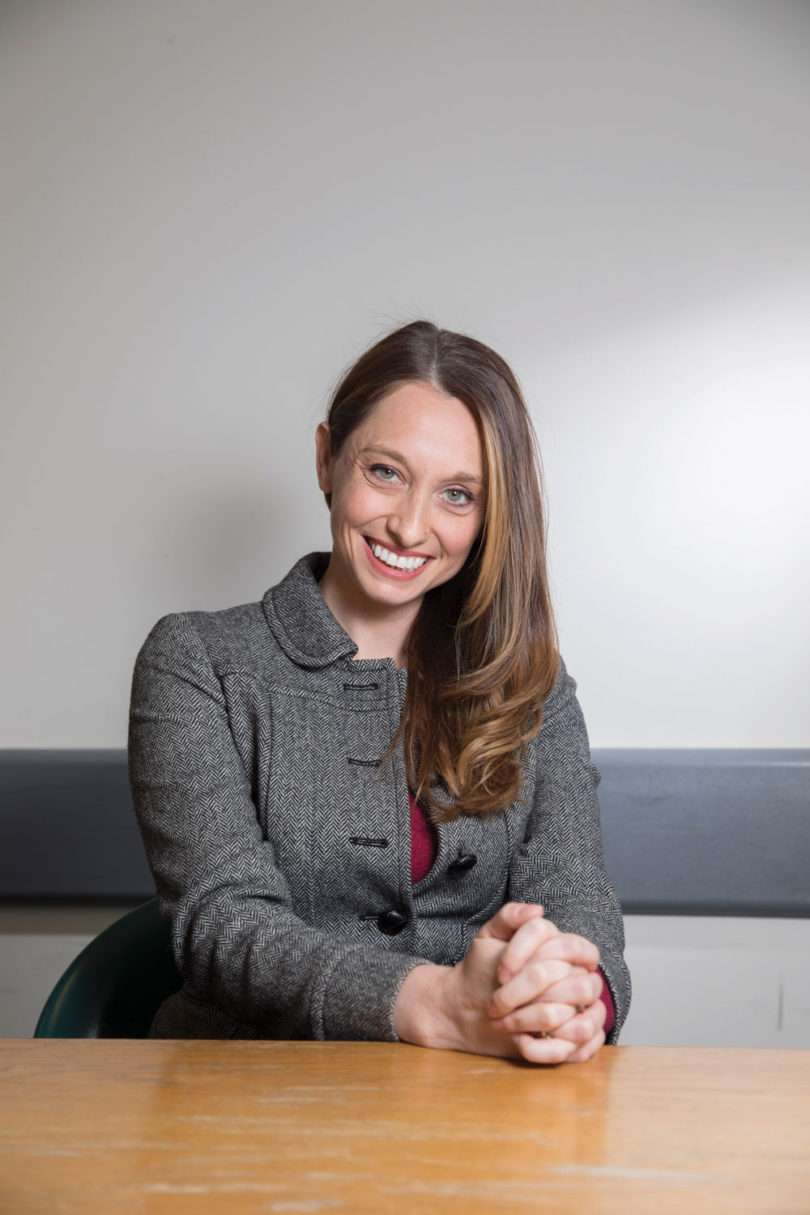 A member of UGA's 40 Under 40 class for 2018, Stephanie Yarnell-Mac Grory BS '06 triple-majored at UGA and is now a leading researcher and clinician in addiction psychiatry at the Yale University School of Medicine. (Photo by Peter Frey/UGA)

As a student at UGA, Stephanie Yarnell-Mac Grory envisioned working at the Centers for Disease Control and Prevention (CDC). She wanted to track down and fight epidemics, and she angled her schoolwork in that direction, excelling at every step. She was a UGA Presidential Scholar, a CURO Scholar, and a member of the Honors Program. She triple-majored in ecology, biology, and microbiology, and after graduating with highest honors, she entered a combined MD/PhD program, which are notoriously difficult to get into.

Her doctoral work involved tracking down and identifying the cause of an emerging epidemic, but through the process, she realized infectious disease research was not what she wanted to do with her life. After successfully defending her dissertation in record time, she returned to clinical rotations. With only nine months before she had to declare the medical specialty that would determine the rest of her career, Yarnell-Mac Grory BS ’06, understandably, felt the pressure. But her clinical rotation on the psychosis ward was a turning point; she became fascinated by the ways in which the brain could malfunction—and found a new purpose.

“Then I started looking into the research and realized that the brain is one of those areas where there is so much left to explore,” she says. “From there, it was easy to decide what I was going to do.”

After graduating first in her medical school class, she joined Yale University’s Neuroscience Research Training Program and completed her residency, as well as fellowships in forensic and addiction psychiatry. Yarnell-Mac Grory is now the chief fellow in the Addiction Psychiatry Fellowship Program at the Yale University School of Medicine, where she works with patients struggling with substance abuse. Many are veterans who battle not just addiction but war-related injuries that are not necessarily physical. In the clinic, she treats their symptoms, and then she goes to her lab, where she researches their causes.

“I am humbled listening to their stories,” she says. “Some of the things they have experienced are catastrophic. Many of the veterans coming back from Iraq and Afghanistan are suffering from traumatic brain injuries—and many other conditions—that psychiatrists can address.”

In 2018, Yale named Yarnell-Mac Grory an emerging biomedical scholar (one of its highest awards for young researchers) and sent her to Washington, D.C., to advocate for the role of science in policy. She also spends a lot of time talking to Yale medical students and residents, encouraging them to enter psychiatry, an underrepresented but much-needed field.

On the research side, Yarnell-Mac Grory is the principle investigator on two current studies. One uses functional neuroimaging techniques to investigate the effects of oleoylethanolamide on alcohol use in real time. The other involves tracking and characterizing the fentanyl epidemic, something Yarnell-Mac Grory is particularly passionate about addressing, as she is involved in community projects in Connecticut to fight the opioid epidemic.

“Psychiatry is a field where you can make a dramatic difference in people’s lives,” Yarnell-Mac Grory says. “You can also make an incredible difference in the field. There are so many projects that need to be done—we are only just getting started.”