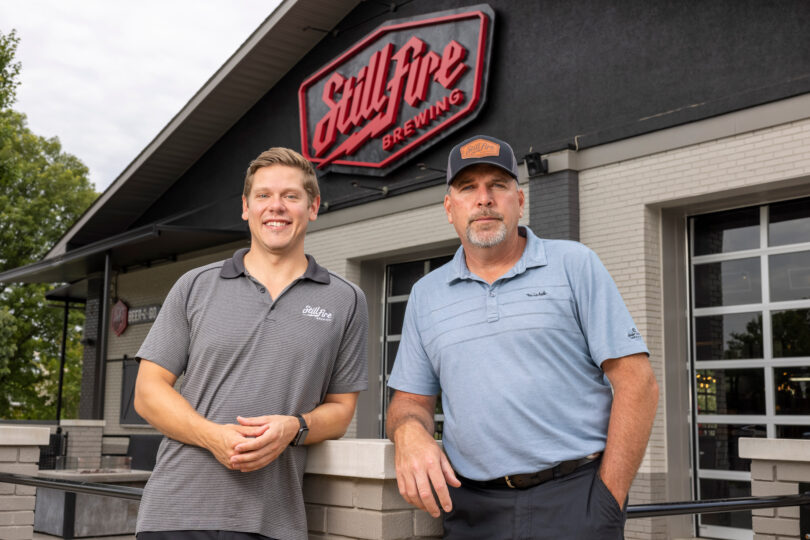 John Bisges, right, co-founded StillFire Brewing with his nephew, Aaron Bisges. The StillFire location in Suwanee has been such a success that the pair recently announced plans to open a second location in Smyrna next fall. (Photo by Peter Frey/UGA)

John Bisges wasn’t a brew-beer-at-home kind of person. But he did think craft brewing would be a good investment. Enjoying the job is just a bonus.

“I started my career in retail, but this is more of a passion. I get to grow this business without having to worry about supporting my family with it,” says Bisges.

In addition to having co-founded StillFire, he is managing director of Dynacraft, a company based in the Savannah area that is one of the world’s largest distributors of bicycles, scooters, and ride-ons—even one resembling UGA’s famed mascot, Uga

Built in an old fire station (hence the name StillFire), the brewery provides an open-air atmosphere with indoor-outdoor spaces inspired by Napa Valley wineries. The dog-friendly atmosphere and fenced-in children’s playground add more local flavor and speak directly to StillFire’s suburban location and aim to be a family destination.

“The old social model of going to dive bars and hanging out in this enclosed dark place just wasn’t very inviting especially for families and kids,” says Aaron Bisges, StillFire’s general manager and John’s nephew. “Breweries now offer more of a social and community aspect than just a place to drink.”

StillFire anchors a downtown renaissance in Suwannee. A lot across the street that had been vacant for more than a decade is being redeveloped into a café/restaurant. Beyond that, a row of more than a dozen locally owned shops unfolds in the shadow of City Hall.

Aaron Bisges joined what would become StillFire during his third year of law school at UGA. John invited him to work on start-up concepts, and Aaron’s law background helped with the business plan.

“When I first saw the site, and then going back and forth with the city, and building this out and putting it on paper, that’s the most exciting part,” Aaron says. “You’re creating something of your own.

He’s not done creating, either. In June, StillFire and Derek Norton BBA ’02, the mayor of Smyrna, announced plans for a new brewery in the heart of that northwestern Atlanta suburb. Its targeted opening date is in fall 2022.