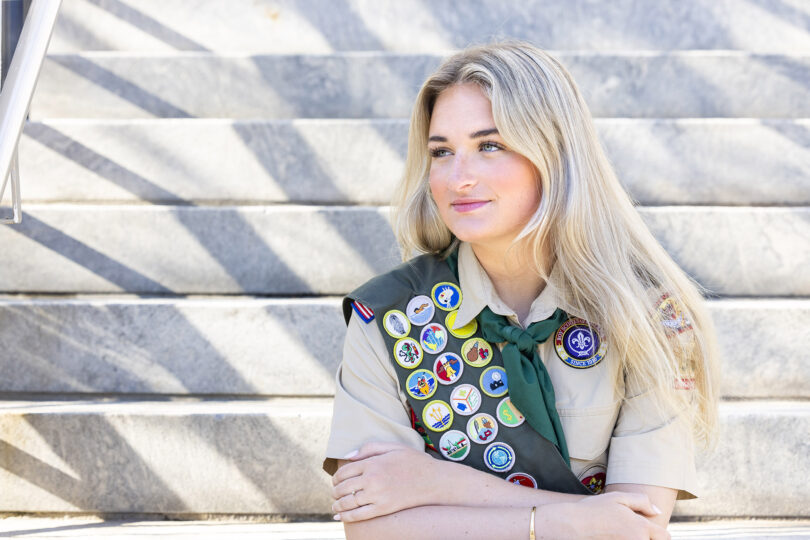 Becoming an Eagle Scout in Boy Scouts is a rare achievement for anyone – only about 6% of eligible Scouts become Eagle Scouts – but for University of Georgia freshman Catherine Hagerty, the journey was extra challenging.

Girls were only allowed to enter the Boy Scouts in 2019, so Hagerty had to complete the extensive list of requirements in two years instead of the usual six, becoming one of the first females in the country to become an Eagle Scout. 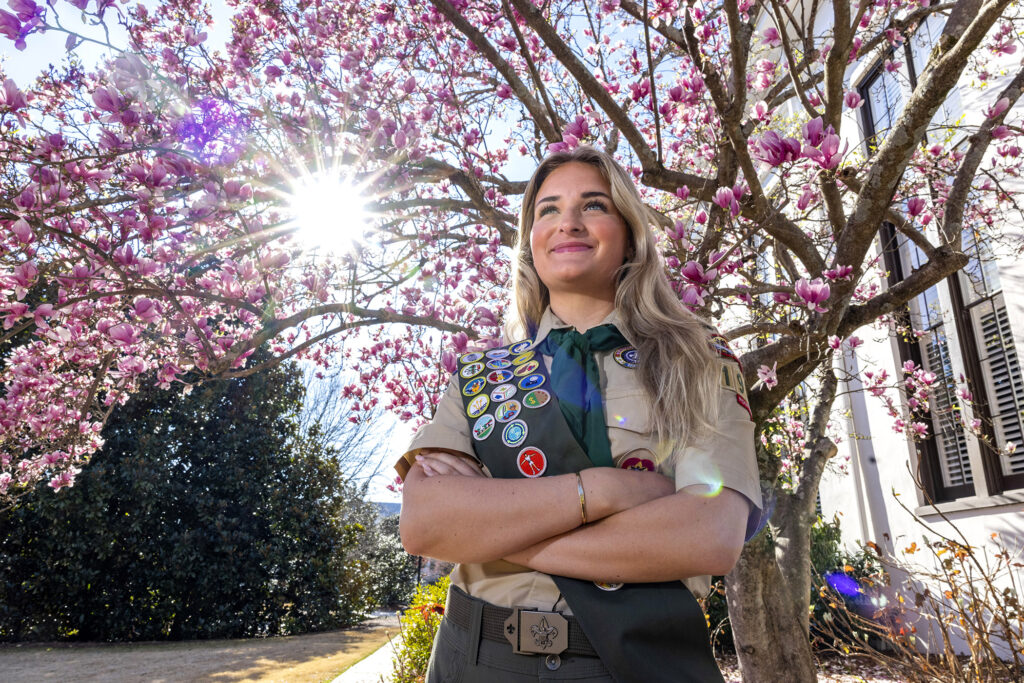 Catherine Hagerty, one of the first female Eagle Scouts. (Photo by Dorothy Kozlowkski/UGA)

The requirements include serving in a leadership position as a Life Scout, completing a service project and earning 21 merit badges in a diverse array of topics including Lifesaving, Personal Fitness and Citizenship in the World.

Hagerty was inspired to give it a try when she attended her brother’s Eagle Scout ceremony. (Brother Michael Hagerty is a recent UGA grad who played on the football team.) “I saw the respect he earned and how appreciative people were towards his achievement so I immediately joined,” she said.

She gathered a group of five other girls and started a troop but her military family moved and her progress was lost due to chartering issues. Hagerty was undeterred and founded a new troop, Troop 1988 in Mechanicsburg, Pennsylvania, leading a group of 15 girls. “I realized that everything I had to do, I had to do very quickly in order to make the age timeline,” she said.

That quick turnaround made it tricky to meet the requirement for badges in time – especially the camping badge, which requires camping for 20 nights, either under the stars or in a self-pitched tent, as well as choosing from a list of additional requirements like “Hike up a mountain where, at some point, you are at least 1,000 feet higher in elevation from where you started” or “Backpack, snowshoe, or cross-country ski for at least four miles.” 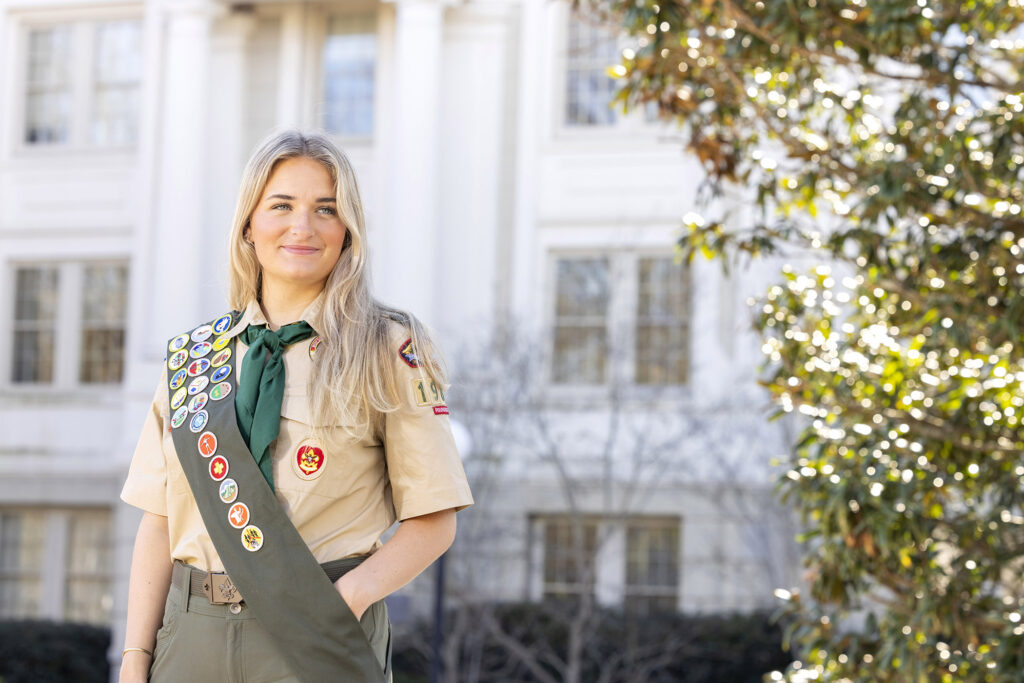 “The experiences were fun but under the timeline it was very stressful to get 20 nights of camping during senior year of high school with sports and leadership. It was definitely the most rewarding badge though,” said Hagerty.

For her service project, she planned and built a flag burning pit for a veterans memorial near her house in Pennsylvania. “When I talked to the committee there, they told me they had a flag burning pit, but the pit was too small for the quantity of flags that they received,” she said. (A previous Eagle Scout had put drop boxes for these flags around town.) “I destroyed the existing pit, then redesigned and reconstructed a larger pit.” The project also involved adhering to township codes and attending various meetings with town committees.

She chose the project to honor her military family. Her grandfathers and uncles served, her father is active duty in the Army and Hagerty is in Army ROTC.

The Eagle Scout training has helped her thrive in ROTC. “I didn’t realize until I got to college and started my ROTC program that the Eagle Scout route is basically the same program and curriculum as in the Army – the same structure, the same physical demands, and the same morals and standard of life that is required. I was really attracted to that,” said Hagerty. 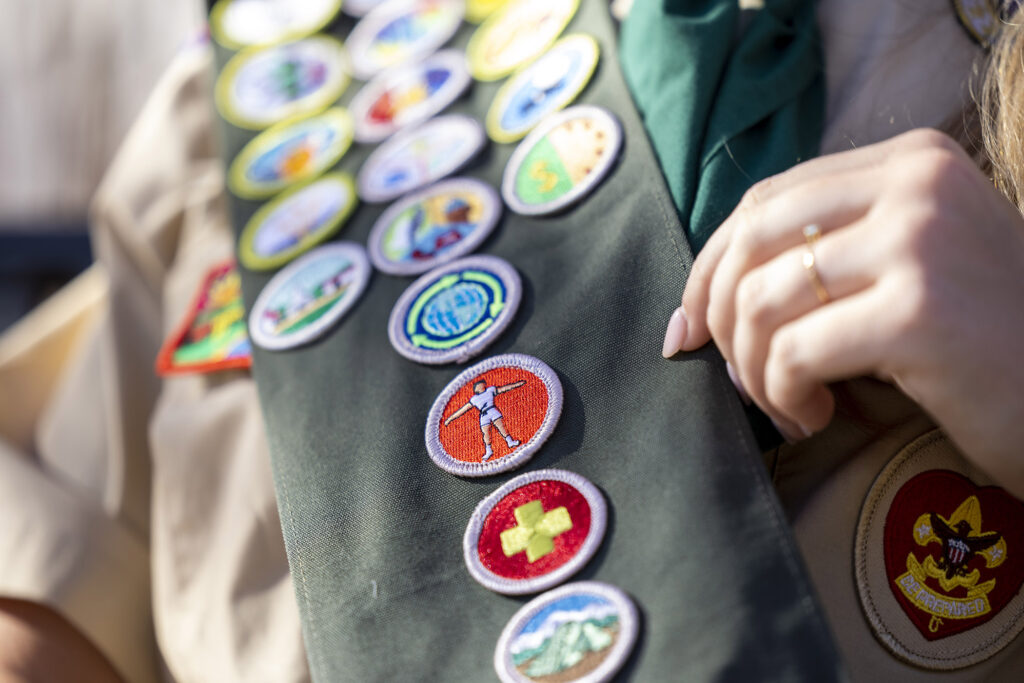 A few of the Eagle Scout merit badges earned by Catherine Hagerty. (Photo by Dorothy Kozlowski/UGA)

After graduation, she will have an eight-year military commitment, then she plans to go to law school on the GI Bill. “I’ll do something in the international community, whether as an ambassador or lawyer for international affairs,” said Hagerty, who has lived all over the world, including stints in Korea, Italy and Hinesville, Georgia. In Hinesville, she decided that UGA was her first choice for college.

“I just fell in love with Southern culture and the people that I met,” she said. She got familiar with UGA via frequent visits to watch her brother play football.  “Every time I came here, I had such an amazing experience.”

Hagerty, who is studying international affairs, knows she made the right decision with UGA. “I absolutely love it. It is the perfect balance of every aspect you could imagine wanting in college. It is academically rigorous as well as fun. And the people you meet are one-of-a-kind. I’m so excited to continue my life knowing all of these people.”

Becoming one of the first female Eagle Scouts in the country was a huge undertaking (“but well worth it,” she is quick to add) and wherever she goes throughout her life, she will carry that distinction. “It’s a title that represents two years of training in first aid, outdoor navigation and also leadership and morals,” she said. “I think that the title Eagle Scout is very respected, and I am very proud when I get to introduce myself as an Eagle Scout because people know the requirements that it takes to get there.