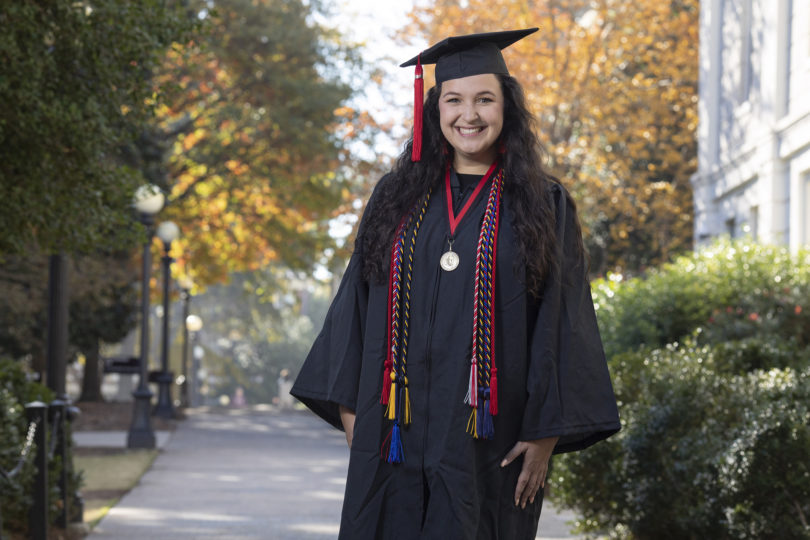 (Since this story was published in December 2019, Taylor Maggiore has graduated and is immersed in her new job as stage manager for ESPN in Bristol, Connecticut. Now, she’s creating a scholarship to further the advancement of women in the world of sports media.

Read more about her scholarship here, and why she started it here.)

Taylor Maggiore fell in love with University of Georgia football when she was 6.

That Christmas, she received two American Girl dolls, and she didn’t know if her family had “won the lottery or robbed a bank to afford these prized possessions.”

And because good business meant more American Girl dolls, Maggiore started paying attention to football. Her grandpa, a 1968 UGA graduate, started explaining different routes, flags, flea flickers and other football rules and tricks of the trade during every football game they watched together.

Now, Maggiore, who is this fall’s student Commencement speaker, is turning that love for football and sports into a career. On Dec. 30 she’ll start her job as a stage manager at ESPN, based out of Bristol, Connecticut. 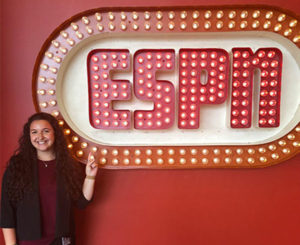 Taylor-Maggiore interned at ESPN this past summer. On Dec. 30 she’ll start her new job at ESPN working as a stage manager. (Submitted photo)

“When I was growing up, I knew I wanted to be in sports. The only role that I saw for women was being on television, on camera,” she said. “Once I got to Grady, I really learned all the different [behind the camera] roles.”

Maggiore, a journalism major from Watkinsville, found her calling in directing. “With directing, it gives you the creative space to figure out what stories you’re going to be telling, and then you get to do it visually. You get to figure out where people should be standing, sitting, what kind of graphics you want, what kind of background you want, camera angles, etc. And I really like calling the shots.”

Her whole life was sports, so she came to UGA because of the Grady College of Journalism and Mass Communication. “You’re not going to get a better journalism education, especially with the sports media certificate. There’s nothing like that in this part of the country,” she said. “I can’t imagine going anywhere else.”

Once at UGA, she signed up blindly for the Grady Sports Bureau her freshman year. There, she did live broadcasts of Athens-area football, baseball and basketball games. “I got my mistakes out of the way doing those games,” she said.

Most importantly, she gotten to do a little bit of everything: graphics, camera, sound, technical directing and stage management.

“You can’t just go into a leadership role, or be a director, if you haven’t touched everything in the room. I think it was really valuable that I got to do a little bit of everything. That’s where I figured out I loved directing, calling the shots.”

The advice that’s helped her build her resume is: “Say yes to any opportunity—especially in the sports world. There’s nothing that’s lesser than you. Any experience is going to be a learning experience, whether you’re learning that this is not what you want your career path to look like or this is exactly what you want to do for the rest of your life.”

And while it’s unavoidable, she said, “Don’t spread yourself too thin. School is important, involvement is important, but the relationships you make here are going to outlast anything.” 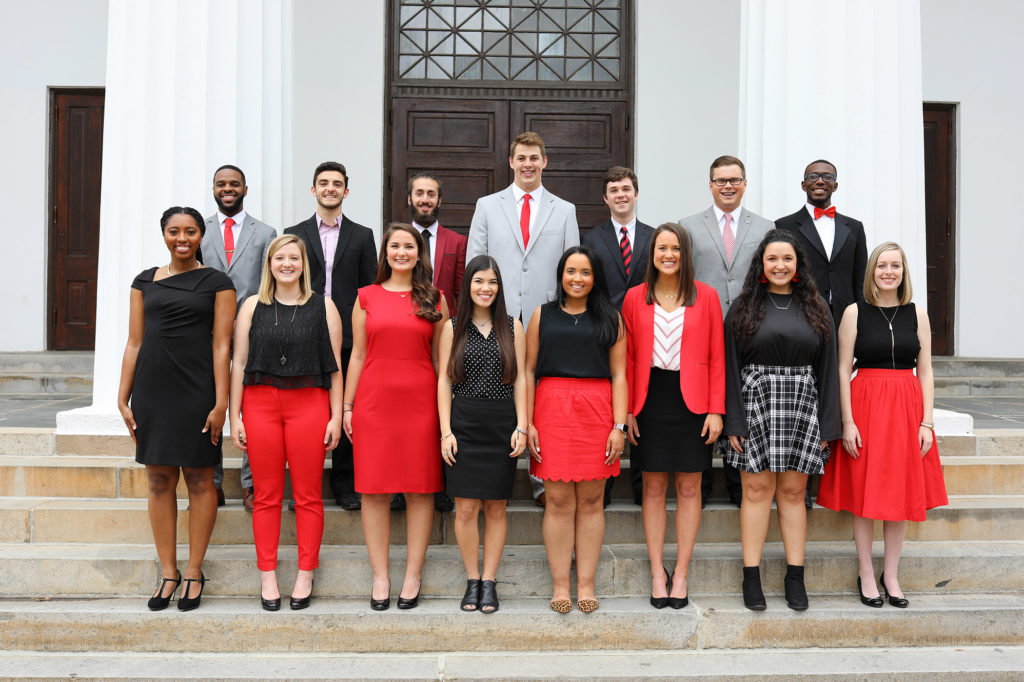 Maggiore served as an orientation leader in 2018. “This taught me how to actually have a conversation with anyone. You’re in this room with 25 students—some of them are going to be the most extroverted extroverts and some are going to be the most introverted introverts—and I learned how to connect and talk to everyone and explain that UGA has a place for you to a room of completely different people.”

Orientation also taught her that she thrives under pressure.

During orientation live, Athens was under a tornado warning—and all 900 students and parents watching the skit had to take cover either in the basement or lower hallways of the Tate Student Center. Maggiore and the orientation leaders entertained the families, passed out snacks and really bonded with students in their groups. It’s one of her favorite UGA memories. “For the chaos that was happening outside, it was so well contained and happy inside.”

It’s a skill that served her well at her 2019 ESPN internship. She was in charge of studio guests—telling them where to go, where to sit, where to look, when to start or stop talking. One day, guest sports reporter Adrian Wojnarowski wasn’t able to make his call time for live TV because he was receiving breaking news. Maggiore worked with the director to move his segment to the end of the show, when he gave a late-breaking update to the story. “In the moment it was so stressful. It kind of worked itself out,” Maggiore said. 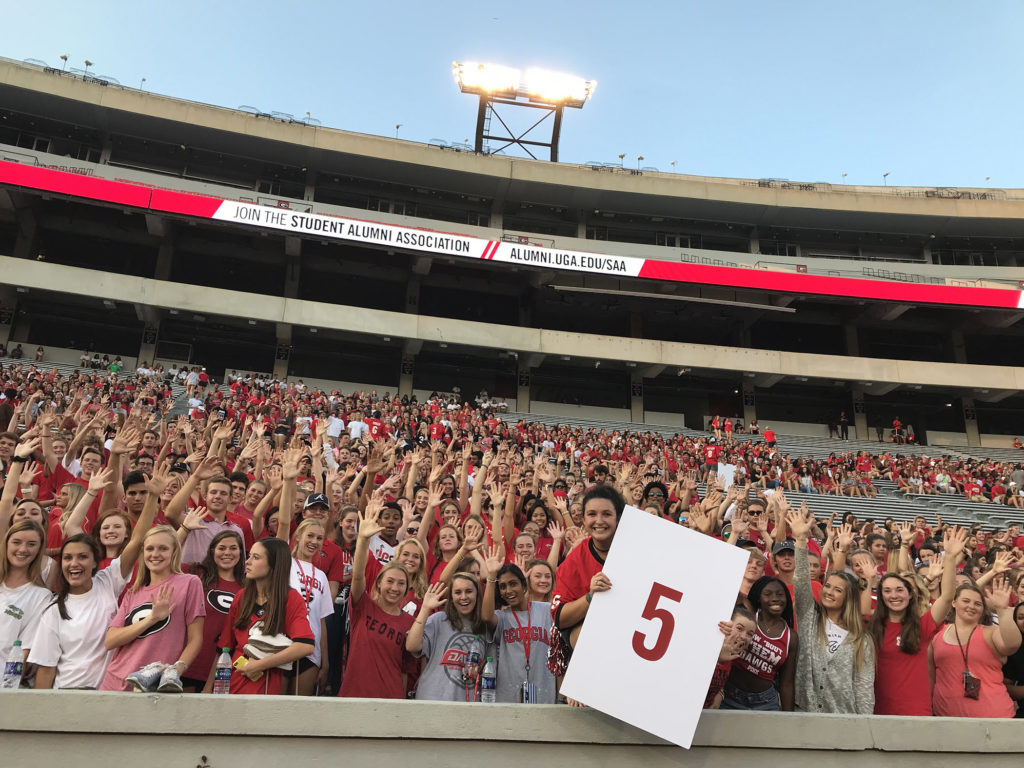 On Dec. 13, Maggiore will be the student Commencement speaker.

The one thing she’s worried about is her voice.

Every Saturday, she yells herself hoarse enthusiastically cheering on the Dawgs, and every Sunday she wakes up without a voice.

“I’m going to have to be really careful with the SEC championships to still have a voice for that Friday.”